It’s not unusual for people to hug at a funeral. Of course, these are usually hugs of consolation, the kind offered in support and accompanied by grim expressions, sometimes tears.

There were hugs when they came to say goodbye — for now — to Deacon Santiago “Jimmy” Salas. Lots of hugs, so many hugs before his June 25 funeral Mass that the interior of St. Cyprian Church in Long Beach resembled the activities of a particularly close-knit beehive.

But these hugs were different, offered with arms and smiles wide and accompanied often by backslaps, sometimes laughter. These were the kind of hugs you’d get at a family reunion or backyard barbecue, the kind Jimmy and Lupe, his wife of 42 years, often threw for friends and those they served, including those they met through the Kairos Prison Ministry.

“A guy would get out of prison, Father Al [Scott] would bring him to Jimmy’s house for dinner, maybe watch a movie and then talk about his reentry into the world,” said Deacon Brian Conroy, who was part of Jimmy’s diaconate class and oversees diaconate formation for the Archdiocese of Los Angeles.

“It was beautiful: you’re in prison, you get out, now what do you do? You go to Jimmy’s house! Just beautiful. It’s why you saw so many happy people [at his funeral]. He did that for so many, brought so much joy to so many people.” 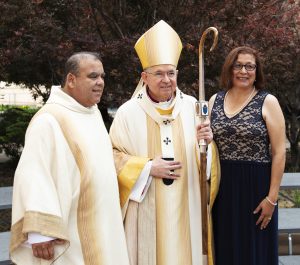 A devotee of the Cursillo movement that trains Catholic lay people to become active leaders and examples of Christ’s message, Jimmy embraced the call to evangelize. Besides his various duties as a deacon, he worked with men in prison, incarcerated juveniles, and delivered the Eucharist to those trapped at home.

If he encountered someone experiencing homelessness, Lupe said, “he would not only give them money, but many times food, and ask, ‘Hey brother, what’s your name? Joe? OK, hello Joe Jones.’ He always respected someone’s dignity. Jimmy’s favorite saying was, ‘The only time you look down on a person is when you’re picking them up.’ ”

Father Scott gave the homily during the Mass, calling Jimmy “a hero to me,” because he “never quit, never gave up,” though no one would have faulted him if he had. Jimmy had been afflicted by numerous ailments and illnesses for a good deal of his life. When he was 49, both of his legs had to be amputated due to diabetes.

And yet, anyone who knew him knew he was never one to complain, never one to ask, “Why me?’ If anything, what some saw as physical challenges, Jimmy viewed as a spiritual advantage, especially when working with others.

“He was such an example of faithfulness, he never used what some people saw as a handicap to get out of anything; if anything, he used it as an opportunity,” said Audrey Hamamoto, a friend and the wife of his deacon classmate, Joe Hamamoto. “He used to say the only time he’d used his handicap to his advantage was to get to the front of the line to volunteer.” 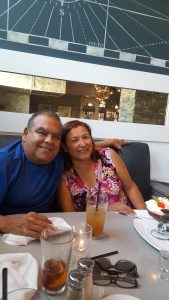 Jimmy and his wife Lupe in an undated photo.

Then there were those moments that Jimmy made sure you’d never forget, like those occasions when he would slip off both prosthetic legs and place them in front of himself to answer someone who believed they had cornered the market on hardship.

“He’d tell them, ‘You think you have problems? Let me tell you what problems are,’ ” said Joe Hamamoto.

During prison ministry, Jimmy was known to use one of the legs as a gavel, banging it on a table to call to order overly excited or unruly young men at a juvenile detention center.

To those he went through diaconate training with, Jimmy served as a lesson that “we had to be men of faith, we had to know that we are here to serve, to always be an example,” Joe said. He could provide that lesson because he had been serving in numerous ministries long before he showed up to diaconate training at Alemany High School.

Lupe said that his inspiration to serve was born after attending his first Cursillo movement event. The pair had met at a family get-together at Lupe’s aunt’s. Her cousin had called her over, introduced her to Jimmy, and casually added that, “This is the man you’re going to marry.” Lupe laughed but, a year later, they were married.

“He was so kind and patient,” she said. “You couldn’t help but fall in love with him.” 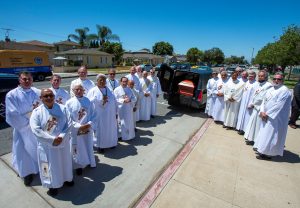 Fellow deacons gather around Salas’ casket for a final farewell after his funeral Mass. (Mike Goulding)

Lupe described themselves as “cradle Catholics” whose faith practice didn’t extend far past attending Sunday Mass. But then Jimmy attended Cursillo as a favor to someone who asked him to, his expectations low to nonexistent. When he returned home, Lupe noticed the difference immediately.

“He didn’t walk back into the house, he floated,” she said. “It totally transformed him, he was nearly unrecognizable. I thought, ‘What did they do to this poor man?’ I thought they had brainwashed him.”

Whatever it did to his brain, the experience had scrubbed his heart along the way, too. Lupe would have her own Cursillo experience and the pair would embark on a lifetime of serving, most often together, Lupe saying that Jimmy was “the brains and I was his hands and legs.”

The pair remained a team when Jimmy became a deacon in 2016, something common among diaconate couples. Virtually all of the couples from Jimmy and Lupe’s diaconate class were at the funeral, forming an honor guard of sorts on either side of the aisle as Jimmy’s casket passed by to the tune of Beethoven’s “Ode to Joy.”

Though diaconate classes are known to be close, this particular class was exceptionally so,  assembling for annual getaways and often spending time at one another's' homes. In many ways, Jimmy was the center from which much of that happened. He was beloved by them, the affection that his brothers had for him never as palpable as the day of his ordination.

Because of his physical limitations, Jimmy was excused by Archbishop José H. Gomez from having to kneel or prostrate himself during the ceremony.

“But he really wanted to be with everybody else in everything,” Conroy said. “So, the two biggest guys in the class placed themselves on either side of him. They put him down on the ground and they picked him back up. It was a beautiful thing to see.” 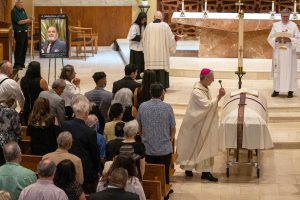 Mourners say their final goodbyes to Deacon Salas at his funeral. (Mike Goulding)

Beautiful things happened a lot when Jimmy was involved, and they happened right up until he passed away. Just three weeks before he died, Jimmy had made a promise to officiate at the baptism of his nephew’s son, but as the day approached, he’d become so ill that he could hardly get out of bed. The night before, Lupe told him everyone would understand if he couldn’t do it.

“He told me he was just going to pray really hard and see what God brings,” she said.

The next morning, Jimmy said he felt well enough to do it, but Lupe said she had her doubts. “His eyes looked sunken in. I had to help him in and out of the car.”

But once he arrived at the church, everything changed. It was as if “the Holy Spirit slammed into his chest,” Lupe said. “He was alive, gregarious, talkative. He did a beautiful job, he even went to the after-party!

“It was like a miracle God granted, a beautiful gift for him and us.”

And for Jimmy’s fellow deacon class, there was that final gift that came in the timing of his death: Thursday, June 10, the night before the fifth anniversary of Jimmy’s ordination as a deacon.