When Father Michael Perucho reflects on all the little things that added up on his journey toward a life in the priesthood, he goes back to a time soon after earning a degree in biochemistry and education from Loyola Marymount University. He was teaching at Junipero Serra High School in Gardena as part of the Partners in Los Angeles Catholic Education program.

“Having gone to a Jesuit education in high school in San Jose, and then at Loyola Marymount, I had an experience where I was taught about how the holy Eucharist wasn’t just the body and blood of Christ,” Perucho said.

“But now that concept was moving from my head to my heart. It was all about having a truer understanding, a greater, beautiful intimacy with our Lord through the Eucharist.” 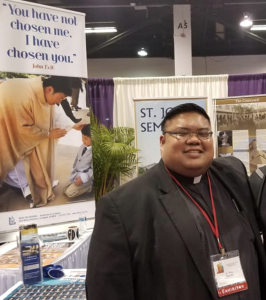 If seeds had been planted through his educational life, Perucho said he also remembers a time when he was an altar server from the fifth through eighth grade, and his mother once said how nice it would be someday if he, or his brother or sister, decided on a religious vocation.

“After I had my calling, I thought about all the experiences I had with family and faith practice,” added Perucho, who, after graduating from St. John’s Seminary in Camarillo, has been a priest for the last eight years, first serving at Holy Family Church in Glendale and then Our Lady of Peace Church in North Hills.

“So maybe [becoming a priest] didn’t happen until 20 years later, but it all sort of made sense when I was reflecting on my life.”

For the last two years, Perucho has been the associate director of vocations for the Archdiocese of Los Angeles (ADLA), partnering with Father Sam Ward.

As part of National Vocation Awareness Week, celebrated Nov. 3-9, Perucho wants to paint a broader brush on how people at all ages may experience the art of God’s calling.

Expanding a parochial school vocation poster contest from the San Fernando Region for the last few years to now, where all five ADLA regions are involved, Perucho is hoping more students from kindergarten through eighth grade can begin crafting posters to submit through their schools to the regional vocation directors by Dec. 13.

Winners will be announced in January and followed up by a special luncheon.

“This is a reminder to the students about listening to whatever God invites them into, to recognize the beauty of all vocations in the priesthood and all religious life,” said Perucho. “It’s also important to focus on how family life is part of this. Vocations always begin with the family and how their faith life is lived and nurtured and strengthened.”

Perucho said the ADLA contest is an extension of a national Catholic project called Focus 11. Research shows that students often have their first thoughts about a religious life at age 11, and then it is re-enforced during their junior year in high school.

While this ADLA contest is only for K-8, Perucho has ideas of expanding and connecting it with high school students sometime down the road.

As winning entries from previous years have shown, creativity, not just with artistic expression but also in conveying an impactful message, has lasting power.

In 2018, then-eighth-grader Meagan Pajarito of Our Lady of Peace School won for the third year in a row in her grade category, submitting an illustration called “God Will Lead the Way,” showing several young people whose two halves have been combined to reveal a new person in the middle.

Patricia Livingston, the former ADLA superintendent for elementary schools and former president of the Serra Club of Los Angeles, said she hopes to get more of her members involved in judging the contest and would like to display the winning entries in Ventura this January during The Serra Rally U.S. council meeting, which has a theme focused on “Creating a Culture of Vocations.”

Posters by Meagan Pajarito (Our Lady of Peace) and Magnolia Ahleng (Sacred Heart).

“I am so impressed by the students’ artistic representations of their views of vocations,” said Livingston. “The posters have been so spiritual and so inclusive, as many of the students highlighted the vocations of marriage and the single life as well as the priesthood and religious life.

“I also love talking to the students and their parents at the luncheon. I think the students really appreciate being honored and receiving all that special attention. It’s a wonderful opportunity for the schools to focus on vocations, for the students to really think about what their own vocations might be, to pray for vocations, and to celebrate classmates whose posters were selected.”

More information about the contest can be found at www.lavocations.org.