“There’s no such thing as toxic masculinity,” Catholic author, speaker, and Chastity Project founder Jason Evert believes. Rather, the heart of many of today’s societal issues is “a toxic lack of masculinity” brought on by rampant pornography consumption, he says.

“Teens and Pornography,” a report released by Common Sense Media Tuesday, revealed that 73% of teens, or nearly 3 out of 4, have consumed pornography.

“The big game changer,” Evert told CNA at last week’s SEEK23, a Catholic conference in St. Louis, “without question has been the phone.”

“There’s no question about it. I mean, the acceleration of the addiction to pornography for both males as well as females,” he said, “is exacerbated by how much time they’re spending on social media instead of living in the real world.”

“A lot of people think, ’Oh, that’s a guy issue,’” Evert said. But since the COVID lockdowns, Evert said he has seen “a massive acceleration of the amount of young women addicted to pornography.” 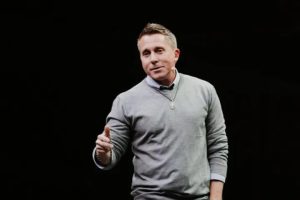 Catholic author and speaker Jason Evert speaking at the SEEK23 in St. Louis in January 2023. (FOCUS Instagram via CNA)

Even practicing Catholic circles are not free of pornography problems.

To Evert, pornography is a great lie that has been seducing men for years. This addiction is at the root of society’s lack of authentic masculinity.

“Pornography to me is the No. 1 factor that’s emasculating males,” Evert said.

“It’s effeminacy, and what I mean by that is not femininity, I don’t mean homosexuality,” he emphasized. Rather, as St. Thomas Aquinas defined the term, effeminacy means “when a man refuses to let go of what is pleasurable in order to do what is arduous and difficult,” Evert said.

“It’s an inordinate attachment to the pleasures that weakens your self-will, and so that makes a man effeminate,” he said.

“It’s really hamstringing a lot of people from discovering their vocation to the priesthood or married life,” Evert explained.

“He doesn’t realize how much scar tissue has accrued on his own heart in the way that he relates to female human beings,” Evert said.