If Father José H. Gomez needed any encouragement in becoming a bishop, the timing was probably enough.

The day of his nomination as auxiliary bishop of the Archdiocese of Denver, Jan. 23, 2001, came exactly a year after the death of his mother, Esperanza.

According to his sister, Maricarmen Celaya, it was his mother’s illness decades earlier that led the young José to a deeper relationship with Christ in prayer. His mother eventually recovered, but the experience marked him for life, and eventually led him to answer the call to the priesthood, Celaya believes.

“It was too much of a coincidence for that to happen to him on that day,” says Celaya.

If he needed any encouragement upon being elected president of the United States Conference of Catholic Bishops (USCCB) nearly 20 years later, the overwhelming majority of bishops who elected him on the first ballot — 176 out of the 238 who cast votes — and the standing round of applause that followed, was also probably enough.

Their Nov. 12 vote at the USCCB’s fall assembly in Baltimore made the Mexican-born archbishop of Los Angeles the first Latino to hold the highest leadership position in the American Catholic Church. 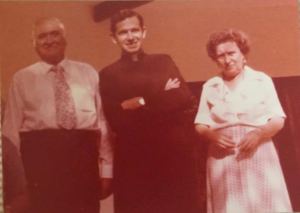 Father José H. Gomez with his parents José and Esperanza the day after his ordination to the priesthood in 1978. (Maricarmen Celaya)

When asked about their new president, those same bishops used words like “kind and gentle,” “respectful,” and “great integrity and great faith.”

But in the cordial hellos, goodbyes, and congratulations from one bishop to another in the ballroom of the Waterfront Marriott Hotel in Baltimore, he is simply “José,” the man who also happens to be their overwhelming choice to lead the bishops’ conference in a crucial moment for the Catholic Church in the country.

Since Archbishop Gomez was elected vice-president at the conference’s fall meeting in 2016 (along with Cardinal Daniel DiNardo as president), his first-ballot election was no surprise this time around. USCCB vice presidents have traditionally been elected president after their three-year terms.

When asked about him, the bishops’ personal observations about Archbishop Gomez can be summarized in one word: trust.

As someone who served under Archbishop Gomez as vicar general and an auxiliary bishop in Los Angeles, Brennan knows a thing or two about his leadership style.

“He will delegate, and he will seek help. And he’ll get it. He’s got lots of support from us,” promised Brennan. 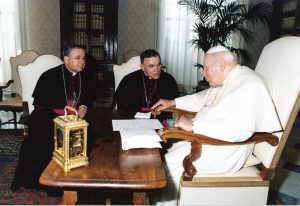 In 1999, Father José Gomez was a priest in Houston, Texas, who was serving in the leadership of the National Association of Hispanic Priests. That year, St. Pope John Paul II traveled to Mexico City for the proclamation of his apostolic exhortation “Ecclesia in America.”

Then-Archbishop of Denver Charles Chaput remembers first meeting Father Gomez on a bus to the Shrine of Our Lady of Guadalupe during the occasion. The two struck up a friendship, and a short while later he called the Mexican-American priest to Denver to help him compile a list for the Vatican of Latino candidates to become the Colorado diocese’s next auxiliary bishop.

“He went through that list of everyone, and after that, I went away from my meeting clearer,” recalled Chaput during an interview with Angelus News in Baltimore. “The one on the top of my list would be José Gomez himself.”

“He didn’t know that at the time,” Chaput added with a chuckle.

Fortunately for Chaput, John Paul agreed with his recommendation, and in 2001 named the 49-year-old an auxiliary bishop for the Archdiocese of Denver.

“We’re in very good hands for the next three years,” said Fresno Bishop Joseph Brennan, who served under Archbishop Gomez as vicar general and an auxiliary bishop in Los Angeles. Click To Tweet

One of the laypeople whom Bishop Gomez worked closest with in Denver was Teresa Polakovic. During his time there, he and Chaput worked with her and other laywomen to found Endow (Educating on the Nature and Dignity of Women), one of the several U.S.-based lay apostolates born from John Paul’s call for a “new evangelization” for the already baptized.

Polakovic says the young auxiliary was a source of encouragement to Endow, which aims at forming Catholic women through small study groups, even telling them they were the most important apostolate in the Church.

“He was just wonderful,” recalls Polakovic. “No matter what he had going on, he would always take my call, even after he moved [to San Antonio].”

It was Bishop Gomez’s approachability that sticks out to Polakovic the most.

“He would be the person I would call if I had to make a big decision. I would talk about almost everything with him.”

Polakovic says she saw up close how he leans on prayer to make important decisions.

“He really has a deep inner strength,” she observed. “On the surface he’s very kind, gentle, and level-headed, and that comes from a deep source of prayer. And that’s just obvious when you’re around him.” 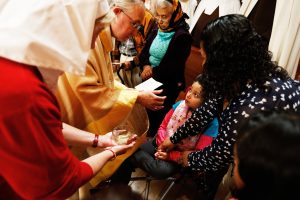 Archbishop Gomez prays over a child during the Anointing of the Sick Feb. 13, 2016 at the Cathedral of Our Lady of the Angels. (Victor Aleman)

When Bishop Gomez was named Archbishop of San Antonio in 2004, he was eventually replaced as auxiliary bishop a few years later by Father James Conley of the Diocese of Wichita, Kansas.

While Conley didn’t know Archbishop Gomez at the time, he certainly knew of him.

“He was just beloved by the people there,” remembers Conley, who today is the bishop of Lincoln, Nebraska. “I lived at the same small parish in downtown Denver where he was pastor, and had said Mass every day for the people.

“He was a really accessible, down-to-earth presence in Denver, and I could tell that immediately when I came,” added Conley.

Like Archbishop Gomez, Bishop Kevin Vann of Orange served in Texas before coming to California. When the pastor from Springfield, Illinois, was appointed the next bishop of Fort Worth in 2005, it was as a coadjutor, meaning that he would share governance of the diocese with his predecessor during a transitional period.

But Vann never got that time of transition. His predecessor died the day before he was ordained a bishop by Fort Worth’s local metropolitan archbishop at the time, Archbishop Gomez.

“I had to take over without ever having been a bishop, except being a pastor,” said Vann. “He always helped me because I was a brand-new bishop. He gave me a lot of advice on how to proceed.”

(That advice included encouraging Vann to brush up on his Spanish in his new, heavily Hispanic Texas diocese.)

“He has a great care for everybody, especially the migrants and the unborn,” said Vann. “And he’s very kind and gentle, and respectful when dealing with people.”

The man who became Texas’s other metropolitan archbishop in 2004, Cardinal Daniel DiNardo of Galveston-Houston, worked together with Archbishop Gomez in leading both the Texas bishops and a few years later, the entire country’s.

“He’s very warm, he’s very straightforward, he’s got a great sense of humor, and he loves the Lord Jesus. That’s good enough for me,” said DiNardo with a smile. 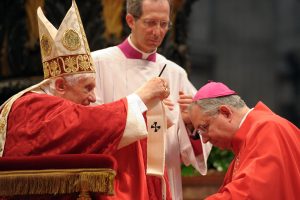 When Archbishop Gomez’s heritage is brought up, it’s often associated with his role as a leading voice on behalf of the country’s Latino immigrants.

Since becoming archbishop of the country’s largest archdiocese, he has lent his support to several different initiatives, liturgies, and advocacy groups involving the immigrant community. And he has built relationships with other faith leaders and politicians from both sides of the aisle to push for commonsense immigration reform.

But in a private capacity, he is especially attentive to the spiritual needs of his people, says Diana Gonzalez.

In 2011, Archbishop Gomez worked with Gonzalez to start the LA chapter of the Catholic Association of Latino Leaders (CALL), a national organization dedicated to inspiring Latino leaders through spiritual and professional formation.

The chapter meets every other month and often hosts speakers to discuss themes of Catholic doctrine, providing networking opportunities, and supporting initiatives like the Catholic Education Foundation and the Queen of Angels Center for Priestly Formation.

“You don’t need to know him long to know that he carries himself with a lot of integrity,” said Gonzalez, who until this year had served as CALL LA’s executive director.

“When you realize what he’s managing, and the size, and everything that he has on his plate, he’s just very humble.”

When Gonzalez and her husband, Rodrigo, were looking for a priest to participate in another group they belong to, Cathedral Couples for Christ, they asked Archbishop Gomez for suggestions, but they didn’t expect him to suggest himself.

“You don’t need to be with our group!” Gonzalez recalls telling him. “We do a potluck and we talk about marriage!”

Since then, the group, which meets monthly at the Cathedral of Our Lady of the Angels and  brings married couples together to support one another through community, has found a loyal participant in the archbishop.

“This is an important and wonderful ministry, because traditionally we don’t have many occasions to minister to these couples after they are married until they have babies for baptisms and then First Communion preparation,” the archbishop told Angelus News last year. 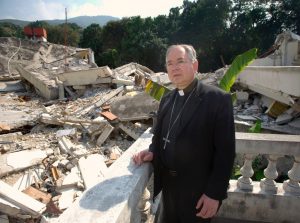 Archbishop Gomez tours hurricane damage in Haiti in 2010. The archbishop led a small team of U.S. bishops to the country to assess how the 7.0 earthquake had affected the local church. (Catholic News Service)

“I think he has shown by his actions in Los Angeles, and also before that, in San Antonio, and at my side in Denver, that he is a man of the new evangelization,” says Chaput of the new president of the USCCB.

As the Church in the U.S. continues to work toward turning the page on the reawakening sexual abuse crisis and prepares to accompany Catholics through what promises to be a tumultuous election year, the shepherd of the country’s largest archdiocese knows he can’t shoulder the added responsibilities alone.

“It is a challenge, because the administrative requirements of bishop in the United States are huge,” the archbishop acknowledged in an interview with Angelus News.

Archbishop Gomez says he expects to “rely totally on the people around me.

“The bishops, the priests, and also the lay faithful that are going to help me to really make the decisions that are appropriate for the needs of the Church in the United States,” he told Angelus News in Baltimore.

It will also include Detroit Archbishop Allen Vigneron, who was elected in Baltimore to serve as the conference’s vice-president for the next three years.

It is the 67-year-old’s collaborative approach that Brennan thinks has earned the trust of his brothers.

“He is a gentleman and a gentle man,” he explained. “I love the fact that he has clear ideas, very clear ideas, and he has vision. And at the same time, he listens.”