Archbishop Gomez elected next president of the US bishops

In a landmark vote, the American bishops elected Archbishop José H. Gomez of Los Angeles as president of the United States Conference of Catholic Bishops (USCCB) at its Fall Assembly in Baltimore Nov. 12, making him the first Latino to hold the highest leadership position in the American Catholic Church.

The 67-year-old Mexican-born prelate was given a standing round of applause from his brother bishops after it was announced that Archbishop Gomez had received 176 votes out of the 238 votes cast in the Tuesday morning vote's first ballot. An assortment of the remaining votes went to a scattering of the other nine candidates nominated in recent months by the bishops.

In another round of voting, Archbishop Allen H. Vigneron of Detroit was elected conference vice president. He was elected on the 3rd ballot by 151-90 in a run-off against Timothy P. Broglio, Archbishop for the Military Services, USA.

Archbishop Gomez succeeds the outgoing president Cardinal Daniel DiNardo of Galveston-Houston, who finishes his three-year term at this month’s meeting. DiNardo and Gomez were elected president and vice-president, respectively, at the conference’s fall meeting in 2016.

In an interview with Angelus, the archbishop expressed gratitude to his brother bishops for the trust they placed in him. 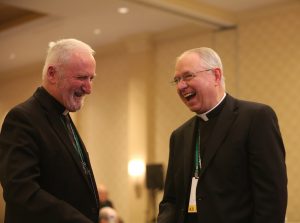 Archbishop Gomez has been a leading advocate of immigrant rights, often voicing support for newcomers as they face growing restrictions being implemented by the Department of Homeland Security and other federal agencies.

His election came on the same day that the U.S. Supreme Court was set to listen to testimonies regarding the fate of the Deferred Action for Childhood Arrivals (DACA) program, an event that the archbishop personally asked faithful in his archdiocese to pray for.

In his weekly Angelus column published Nov. 11, Archbishop Gomez called on Congress and President Trump to "take responsibility and act now," while adding that "everyone should resist the temptation to make this a campaign issue."

"Now is the time for true leadership," he wrote. "That means we need to stop opposing ideas just because “the other side” has proposed it. That means we need to reject the thinking that causes us to resist compromise because it might give our political rivals a 'win.'"

In order to lead the conference, whose headquarters are located in Washington D.C., the president-elect says he will be relying heavily on the advice and support of collaborators and staff in both LA and the nation's capital.

"The bishops, the priests, and also the lay faithful that are going to help me to really make the decisions that are appropriate for the needs of the church in the United States." 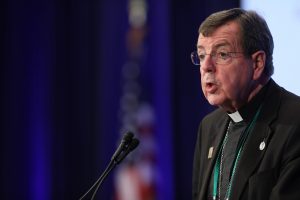 Detroit Archbishop Allen H. Vigneron speaks during the fall general assembly of the U.S. Conference of Catholic Bishops in Baltimore Nov. 11, 2019. He was elected the USCCB's next vice president the next day. (CNS photo/Bob Roller)

He insists that despite what some believe, the U.S. bishops are focused on following the lead of Pope Francis at this "moment of renewal and reform" in the Catholic Church.

The prelate, who previously served as an auxiliary bishop in Denver and archbishop in San Antonio before being appointed to Los Angeles in 2010, also acknowledged the challenge of the additional leadership role while continuing to shepherd the nation’s largest archdiocese.

“I need to find a way to not lose the sense that my main mission is to be a pastor, both at the Archdiocese of Los Angeles, and also at the USCCB,” he told Angelus. “That is what God is asking me to do. Not to be just an administrator, but also be a pastor that brings the presence of Christ to the people.”

Dennis Sadowski of Catholic News Service contributed to this story.