More than 2,000 people filled the Cathedral of Our Lady of the Angels for the Oct. 21 funeral of John Shea, a Los Angeles native who purposefully steered clear of attention and acknowledgement for being one the most prolific donors to U.S. Catholic schools in the last several decades.

Shea, whose family’s giving is believed to be one of the largest in Catholic school philanthropy in the last several decades, died Oct. 16 at the age of 96. Among those paying tribute at the funeral were students from some 50 LA-area Catholic schools that Shea had helped over the years.

“Our friend, John Shea, left a legacy of love,” said Los Angeles Archbishop José H. Gomez in eulogy remarks. “Love in his family, love in his friendships, and love in this city.”

Much of the support from John and wife, Dorothy, was given to schools in the Archdiocese of Los Angeles. By modest estimates, his family foundation steered hundreds of millions of dollars over the last 35 years to create tens of thousands of scholarships, fund more than 1,000 school renovations, and support the operations of more than 500 campuses across the country.

“John did everything behind the scenes,” said Archbishop Gomez, who was the principal celebrant of the funeral Mass. “He didn’t do it to get awards, to be recognized. I doubt whether most of the people he helped, even knew his name.”

Angelus and its predecessor publication, The Tidings, have reported on the multitude of projects over the years supported by grants from the Sheas, including in Compton, La Puente, Downey, East and South LA, North Hollywood, Long Beach, and Bell Gardens. 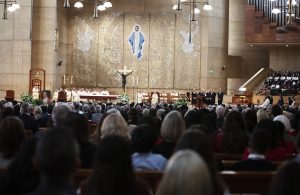 More than two thousand people filled the Cathedral of Our Lady of the Angels for the Oct. 21 funeral Mass for John Shea. (Victor Alemán)

The construction magnate’s philanthropic approach could be summed up in a rare quote given at the unveiling of renovations at two South LA Catholic schools, St. Raphael and St. Malachy, in 2005:

“If you really want to help inner-city families, the best place to put your efforts and your dollars is in Catholic schools,” he then told The Tidings. “They are very, very effective.”

According to Brother Hilarion O’Connor, the operations director and Strategic Capital Projects leader for the Cathedral of Our Lady of the Angels, the Shea Foundation has been involved in 15 to 25 projects a year. They expanded past LA to areas of the Coachella Valley, San Bernardino, and San Diego, as well as Arizona, Seattle, and New York.

Brother O’Connor said it started in 1993, when Shea financed three bungalows to be built on an archdiocesan school campus. Brother O’Connor had been in the education department for 10 years and got to know Dorothy Shea, one of the founding members of the Catholic Education Foundation (CEF). When Brother O’Connor moved into the construction office, he worked more directly with John Shea to consult with him and Dorothy on worthwhile projects.

“I remember one instance when a school in a poor area needed help, and John was in a quandary whether he should support it or not,” he said. “He called me and after about 10 minutes, going back and forth, I didn’t seem to be helping him too much to make up his mind. He finally said to me: ‘You know, if I don’t do it, then who will?’ So that’s how it came to be.”

Most of the recent construction projects have focused on modernizing current school sites with STEM technology and infrastructure, Brother  O’Connor pointed out. During their last conversation, he said, Shea asked from his hospital bed how some of their current projects were moving along.

“There were many things he was approached with, but he never diverted from the mission to support inner city Catholic schools,” said Brother O’Connor. “And it was a tremendous partnership with Dorothy as well as with his family.”

At an award ceremony honoring John and Dorothy at St. John’s Seminary in Camarillo in 2019, Bishop O’Connell recalled how the Sheas were “the saving grace” for the schools of the two South LA parishes where he was pastor, St. Michael’s and St. Frances X. Cabrini.

When the couple were honored by the Leadership Roundtable with the prestigious J. Donald Monan, SJ Distinguished Catholic Philanthropy Medal the same year, Archbishop Gomez described the Sheas as “a quiet source of hope for people who are usually forgotten in our city — the poor, the immigrants, those living on the margins from paycheck to paycheck; and especially their children.”

“So many of these young people are the first in their families to get out of high school and go on to graduate college,” said the archbishop at the Washington, D.C. event. “Many are now leaders in the communities they came from.” 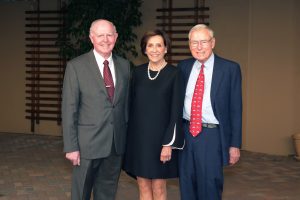 John and Dorothy Shea, married for 54 years, had eight children, 31 grandchildren and one great-grandson (all are Catholic school educated). John was predeceased by his first wife, Susan, who died in 1967.

Known in business circles for the success of his families’ generational construction companies, John Shea was a graduate of Los Angeles High School and USC’s School of Engineering. He was a regular on the Los Angeles Business Journal’s list of the wealthiest people in the city. His last estimated wealth was $2.3 billion.

But in a release announcing his passing, his family said Shea discovered “his true calling” in supporting Catholic education in the inner-city. And for all that Shea channeled into projects, Paul Escala, the senior director and superintendent of the Department of Catholic Schools, said it would be shortsighted to try measuring his impact on Catholic education in dollar figures.

“John’s generosity was transformative in the impact on the life of the children,” said Escala. “Each dollar is translated into a high-quality school environment where principals and teachers care and know each child like Christ knows everyone by name. That level of impact can’t be measured or quantified monetarily.”

According to Escala, Shea saw Catholic schools as “ground zero of where every aspect of social life is met.”

“For someone with incredible worth and privilege, this is a man who didn’t need accolades, which is what I admired deeply about him. He just wanted to see good in the world and it was his responsibility to meet needs and give back.”

Escala said he talked last with Shea on his birthday with an update on the Educator Investment Initiative, recently increased from $6 million to $7.5 million, which the Shea Family Foundation had engineered in collaboration with the Catholic Community Foundation of Los Angeles (CCF-LA). Its goal is to retain and recruit more than 650 full-time teachers and 74 principals in the archdiocese’s greatest-need areas.

The Shea family is also behind a two-year program called Vision To Learn, with intentions to give free eyeglasses to as many as 20,000 students in the Archdiocese of LA.

CCF-LA’s relationship with the Shea family began in 2015 with the creation of the John and Dorothy Shea Charitable Fund. CCF-LA manages the Shea’s charitable assets.

Kathy Anderson, president and executive director of CCF-LA, has worked with Shea for more than 20 years. She estimates that more than 1 million students have attended schools “touched by his vision to provide our most financially deserving students with safe, updated, and brand-new facilities.”

“He recognized that tuition was not affordable for many, if not most, so tuition assistance was added to his vision,” said Anderson, the former executive director of CEF.

When contacted over the phone by Angelus, Escala was in Washington D.C., at a leadership summit with a delegation from the National Catholic Education Association (NCEA) for a leadership summit. That day, the group was at the U.S. Capitol to advocate on behalf of the 1.6 million children who attend Catholic schools.

“I feel John with me right now, reinforcing us to share the stories of our young people and invoke the good work of our schools,” said Escala. “We’re doing all this through John’s generosity.”

The family asked that in lieu of flowers, donations in his name be made to the Catholic Education Foundation of Los Angeles, which is celebrating its 35th anniversary this year. CEF said it has generated some $225 million for tuition assistance over the year, much of it from Shea. The CEF website — cefdn.org — now has a link for donors on Shea’s behalf.

“It was my privilege to know him, to learn from him, and to work with him in support of the mission of the Catholic Education Foundation,” said CEF Executive Director Doug Cooper.

“The impact of John Shea’s generosity throughout the Archdiocese of Los Angeles will be felt for generations to come. His passion for Catholic education was immeasurable. We take seriously the responsibility to ensure that Mr. Shea’s legacy be honored and fulfilled.”