A $6 million philanthropic effort has enabled an increase in salaries of teachers and principals in some of the Archdiocese of Los Angeles’ highest-need areas. It is also being credited as a key factor in the Department of Catholic Schools’ (DCS) 4% increase in student enrollment heading into the 2022-23 academic year.

The district had seen an 11% overall enrollment dip from 73,000 in the 2020-21 school year when the COVID-19 pandemic forced students into distance learning.

“I keep hearing about how these were ‘lost years,’ ” said Escala. “They ask, ‘Will kids ever get those years back?’ I am dismayed by that idea. Children are resilience. We can rectify and remedy what has been lost along the way and use it as a lesson for growth moving forward. We must rebuild.” 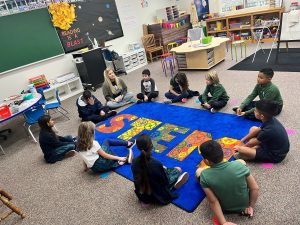 The pay increases are the fruit of an initiative involving Shea Family Charities and the Catholic Community Foundation of Los Angeles. The funding allowed schools to retain and recruit 655 full-time teachers, as well as 74 principals in 74 schools — with a commitment to grow those numbers, according to Escala.

Escala said a survey of schools reported that 54% of teachers who left their positions at the end of last school year cited salaries and benefits as a strong reason why.

“It forced us to take a long and hard look at things,” said Escala. “The data showed that while teaching is a ministry, we must have competitive salaries to compete in this labor market and reflect their talent and skill.”

Data from the archdiocese shows that during the 2021-22 school year, the national STAR assessment exams for early literacy showed more than a 65% jump for kindergarteners and first-graders. It also had a 4.2% growth in benchmark reading and 6.8% growth in benchmark math for second- and eighth-graders. Ninth-graders showed a 55% growth in math and 54% in reading.

Additionally, Escala noted, LA Catholic schools continued to conduct testing during the pandemic while public school districts in the state did not. 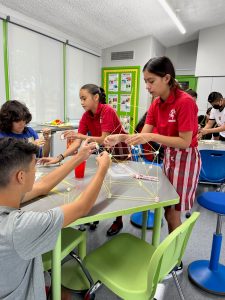 The funding has proved to be a godsend for schools like Our Lady of the Holy Rosary School in Sun Valley, which this summer saw the departure of the women religious that had staffed the school for more than 40 years, the Sister Servants of the Blessed Sacrament.

“The transition of seeing the sisters leave for this year was very sad, and hard,” acknowledged teacher Rosa Anderson, who was tasked with helping recruit new staff.

The partnership with Shea Family Charities, officially known as the Catholic Educator Investment Initiative, helped the school find and hire Araceli Esparza as Our Lady of the Holy Rosary’s next principal, whom Anderson believes is “an angel sent to us.”

“She instills the same passion for our strong Catholic identity here in school, which makes our parents very happy,” Anderson told Angelus. 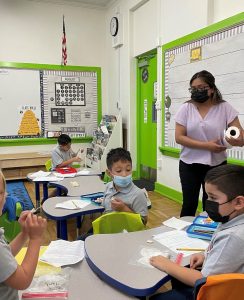 Jim Ryan of Holy Spirit STEM Academy in the Mid-City area of LA was promoted to fill one of the 30 new principal openings in the archdiocese this year. The school currently has 140 students this year, up from 80 at the start of COVID-19. Ryan credits the Catholic Education Foundation’s New Enrollment Initiative program with making school tuition accessible to more families.

“I’m a product of Catholic school, started my educational career at Holy Spirit and was lucky enough to participate in the Onward Leaders program thanks to the Smet Foundation,” said Ryan. “We are off to a tremendous start.”

Ashley Giron, principal at St. Jane Frances de Chantal School in North Hollywood, said she is starting the year with 337 students, up from 248 last year and coming close to doubling the 183 when she first came to the school in 2018-19. There is a waitlist for preschool, TK, first and sixth grade classrooms.

“These past three years have been the hardest years we have ever experienced,” said Giron. “New families found our school after the pandemic through their friends’ and family members’  recommendations. I believe we were able to provide a safe and stable environment in the midst of a chaotic time, and parents have remained in our community even after their public schools opened up due to the community they found at St. Jane Frances de Chantal.”