At interreligious Cathedral vigil, homeless dead remembered by their names

Delia Johnson heard from her family contacts that Major Slaughter, the brother of her former husband, had died recently after a long struggle experiencing homelessness. Johnson knew a bit about the situation of the man best known as “Cowboy.” But she had long since lost touch with him.

Information about a service would come soon, she was told. Slaughter’s daughter had claimed his body from the coroner’s office and was waiting for it to be released for cremation. The coroner noted the 63-year-old died on Nov. 5, with the cause listed as “natural/unknown.”

Still, the gravity of Slaughter’s passing didn’t really resonate with Johnson until she and a friend were quietly leaving the Cathedral of Our Lady of the Angels Dec. 21 following the Archdiocese of Los Angeles’ first Homeless Persons Interreligious Memorial.

Those in attendance were encouraged to take with them one or more of the small white bags with a tea-light battery-charged candle inside arranged in a “luminaria” along the cathedral’s south ambulatory.

As Johnson scanned the names on the bags, the one with Slaughter’s name caught her eye — one of 1,462 set upon the granite-tiled floor. That number represents all those homeless who could be identified that had died on the streets of Los Angeles this past year through Nov. 30.

As Johnson picked the bag up, she felt the impact of the evening.

“It was the work of the Holy Spirit,” said the Compton resident and longtime parishioner at St. Lawrence of Brindisi Church in Watts. 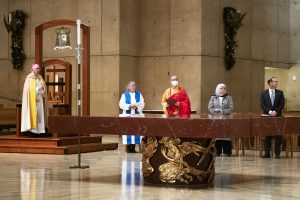 “I was thinking about the procession, the reflections, the Gospel reading, and how all the ministers had shown solidarity in such a purposeful and purpose-filled occasion. But who knew my brother-in-law was spiritually calling my name? Hush, hush, somebody’s calling my name!”

Johnson has been involved in an array of community organizations over the years, and today she serves on the Archdiocese of Los Angeles’ Anti-Racism Task Force. She said she was drawn to the service to support the efforts of the Office of Life, Justice and Peace (OLJP), which spent months organizing the event.

More than a dozen faith leaders from around Southern California joined Archbishop José H. Gomez for the event, including representatives from Hindu, Jewish, Buddhist, Baháʼí, and Muslim traditions as well as Lutheran, Episcopal, and Church of Jesus Christ Latter-day Saints congregations.

In the front row was newly inaugurated Los Angeles Mayor Karen Bass, whose campaign prioritized addressing homeless issues. Following through on a campaign promise, Bass declared a state of emergency over homelessness on her first day in office earlier this month.

“The concept wasn’t meant as a Catholic experience, but for all the communities and neighborhoods in our city and county,” said OLJP senior director Michael Donaldson. 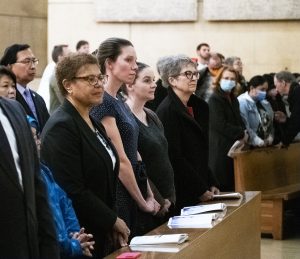 Newly installed LA Mayor Karen Bass was among the guests at the Dec. 21 vigil. (Victor Alemán)

Donaldson noted that since 1990, the National Coalition for the Homeless had been staging a National Homeless Person’s Memorial Day on Dec. 21, encouraging more participation nationally. The memorial is consciously set for the date of the winter solstice, the longest night of the year.

Before reflecting on the Gospel reading of the parable of the good Samaritan in his remarks, Archbishop Gomez welcomed Mayor Bass, thanking her for prioritizing homelessness and praying that God grant her “wisdom and courage, prudence, and humility.”

In his remarks, Archbishop Gomez remembered those who died on the streets, asking that “the home they could not find on earth, they now find in heaven, secure in the merciful arms of God.”

He also prayed that all those present could receive the “courage and creativity that we need in order to meet the challenges of this moment in our city.”

Pastor Stephanie Jaeger of the Evangelical Lutheran Synod of Southern California touted the advantage that faith-based groups have over government offices in addressing the crisis.

“Faith communities are all about long-lasting relationships,” she said. “It’s something different than the services offered that can isolate and segregate. We are one with the divine that restores and renews and transforms. We bring the gift of welcome and solidarity and sacred space, and a shared sense of belonging to each other.” 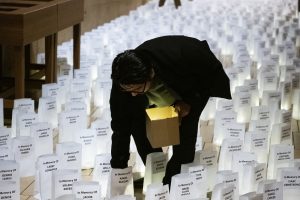 1,462 small white bags with a tea-light battery-charged candle inside were arranged in a “luminaria” along the cathedral’s south ambulatory. The bags represented the number of identified homeless persons who died on LA's streets from January to November 2022. (Victor Alemán)

The memorial occurred just weeks after the Los Angeles County Crematorium Cemetery in Boyle Heights laid to rest the cremated remains of more than 1,600 people in a mass grave — bodies unclaimed since 2019. Many among them were presumably homeless with no known family members to claim them.

Father Chris Ponnet, one of several religious leaders who officiates at the burial, said such events are key to acknowledging “the dignity of each person in life and in death.”

“We have to realize these are people who could have died from COVID,” said Father Ponnet, pastor at the St. Camillus Center for Pastoral Care and chaplain at USC Keck Medical Center near downtown.

“Hopefully this motivates people to say to the larger group: Health care is needed for all, and the homeless are our family, our neighbors. That’s the challenge for any religious group.”

For more than 20 years, Jess Echeverry has guided the Westchester-based nonprofit organization SOFESA, which aims to help alleviate obstacles facing homeless and low-income families in Southern California. SOFESA and the Society of St. Vincent de Paul Los Angeles partnered with Donaldson’s office to organize the vigil.

“It could have been me,” said Echeverry, who was homeless for seven years.

Echeverry said that in addition to those who die from drug overdoses, assault, or even hypothermia, the homeless face a more hidden threat: the temptation to take one’s own life to end their misery and hopelessness. She said she attempted suicide twice during her homelessness.

“For me, this is an important event because, in my heart, I’m doing something for the value of heaven — this has a spiritual value,” said Echeverry. “Does everyone know these names? No, but for these people who passed, I do believe they can see this and feel this. And most importantly, God sees us loving them.” 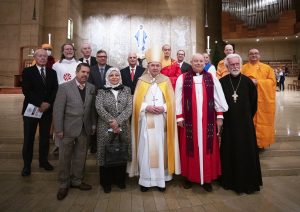 “Parish communities can be voices for the voiceless, getting involved in their city councils and homeless committees,” said Donaldson, who worked with chancellor Sister Mary Anncarla Costello, SND, and longtime archdiocesan interfaith officer Father Alexei Smith to plan the event.

One of the charitable action items tied to the memorial was a QR code linking to a website where sleeping bags, socks, and blankets could be purchased for distribution. Community drives to collect items in connection to the memorial were taken up at St. Paul the Apostle in Westwood, St. Jerome Church in Westchester, St. Elizabeth Ann Seton Church in Rowland Heights, St. Linus Church in Norwalk, Dignity California Hospital Medical Center, Cantwell Sacred Heart of Mary High School, and UCLA’s Catholic Center.

While venues including the Los Angeles Mission homeless shelter near Skid Row and St. Monica’s Church in Santa Monica have held regular interfaith memorials in the past, Donaldson foresees this larger-scale service continuing with a rotation of places of worship acting as hosts.

“This isn’t meant to be a one-time event, but something to change the heart and mindset of how we want to remember those who died on the streets with dignity and purpose,” said Donaldson.