Speaking to LA-area legal professionals and civic leaders, Cardinal Wilton D. Gregory of Washington, D.C., praised the court system as a reliable expression of “our freedom as a nation and as a people” amid uncertainty over the economy and upcoming midterm elections.

“We should begin each new judicial season always filled with the hope that honesty and integrity will triumph, and the laws of our nation will be properly applied and observed,” said Cardinal Gregory in his homily at LA’s 40th annual Red Mass, which was concelebrated by Archbishop José H. Gomez, LA Auxiliary Bishop David O’Connell, and several dozen local priests at the Cathedral of Our Lady of the Angels on Wednesday, Oct. 26.

Acknowledging the “high level of anxiety over the condition of our economic health and the vitality of our democracy” in the U.S., the 74-year-old prelate said the upcoming midterm elections “should cause all of us once again to give thanks for the precious gift of freedom — even if the campaign rhetoric does manage to become much too excessive at times.” 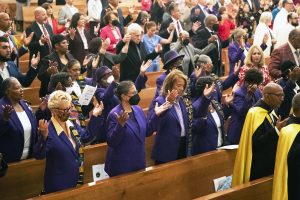 Guests pray at the annual Red Mass at the Cathedral of Our Lady of the Angels Oct. 27, 2022. (Victor Alemán)

“It might easily occur amid our biennial election year campaigns that we could overlook or underestimate the beginnings of the new judicial term in the face of the excitement of this particular moment,” said Cardinal Gregory, the nation’s first African American cardinal and the former president of the U.S. Conference of Catholic Bishops (2001-2004). “Yet we would do so only at our own peril.”

Instead, he suggested, “we should begin each new judicial season always filled with the hope that honesty and integrity will triumph, and the laws of our nation will be properly applied and observed.”

“New beginnings are good for the soul,” he added. 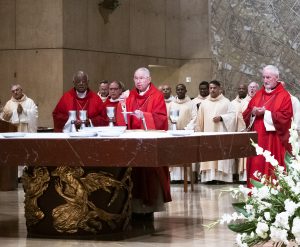 Organized by the local chapter of the St. Thomas More Society, the Red Mass is an ecumenical, civic celebration that honors judges, lawyers, legislators, and legal professionals often held around the time the U.S. Supreme Court begins its new year, usually the first Monday in October.

The more than 400 people attending this year included Orthodox Christians, Lutherans, members of the Church of Latter-day Saints, and representatives of various branches of Judaism. As in previous years, the Mass’ ceremonial honor guard was led by Knights of Saint Peter Claver and Knights of Columbus.

St. Thomas More Society of LA president Carmela Bombay told Angelus that the Red Mass marks a shared recognition on the part of lawyers that they need God and spirituality in their work. She noted that the attorneys and judges present at the Mass see one another in court, often on opposing sides of cases.

“But when we come together like this, we realize that we’re much more alike than we are different,” said Bombay, an LA-area trust and estate planning lawyer who is one of the event’s lead organizers. “And that's why this is important.” 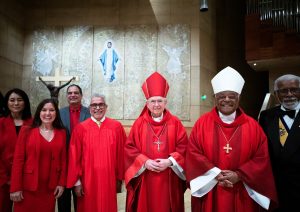 In his homily, Cardinal Gregory called the virtue of justice “a divine characteristic of God himself.” When justice is represented by statues depicting an impartial feminine figure in the style of a Greek goddess, the cardinal explained, “she is a symbol of a reality that shares some divine attributes.”

“Whether we are Christian, Jewish, or Islamic in heritage, we all believe that God himself is perfectly just,” said the cardinal. “Moreover, all of you who are engaged in the administration of justice cannot and must never completely eliminate or neglect that divine attribute from your service and your calling.”

In remarks at the end of Mass, featured speaker Philip Gutierrez, chief judge for the U.S. District Court for the Central District of California, praised his mother for having the “foresight” to put him through Catholic school at Our Lady of Lourdes School in East LA as a child. He went on to attend the University of Notre Dame and UCLA School of Law.

Gutierrez reflected on the ancient prayer “Veni Sancte Spiritus” (“Come, Holy Spirit”) as useful for Catholics in law. While one can ask the Holy Spirit to “comfort us and guide us,” there is a second, “riskier” way to ask, he said.

“As smart as we are,” said Gutierrez in a playful nod to his colleagues, it’s important “to realize that God always knows what’s best for us and how to best serve our community. So when we pray ‘Come, Holy Spirit,’ … are we willing and ready to do what the Spirit might ask of us?”