Could Vin Scully’s prayers get Gil Hodges into the Hall of Fame?

Praying for Gil Hodges doesn’t ever seem to fall out of favor.

It’s been nearly 50 years since the Dodgers’ first baseman and “Boys of Summer” legend died suddenly of a heart attack on Easter Sunday in 1972 at the age of 47. But those asking for intercession on his behalf lately are doing so with a bit more urgency — and hoping that someone might be listening in Cooperstown, New York.

Among them is none other than Vin Scully.

“Gil Hodges was one of my all-time favorites,” the iconic broadcaster recently wrote on Twitter, responding to a photo of the two together at Brooklyn’s Ebbets Field in the early 1950s. “I pray he’ll get into the Hall of Fame.”

Scully is among those who see Hodges as a victim of one of baseball’s greatest historic injustices, a treasured figure who still lacks the validation of a plaque among the legends in the Baseball Hall of Fame.

Hodges’s 18-year playing career in the majors included four seasons in Los Angeles after the Dodgers moved from Brooklyn to LA in 1958. He won the World Series, won three Gold Glove awards, made eight All-Star appearances and retired in the top 10 among the all-time home run hitters.

He later went on to manage the franchise that replaced the Dodgers in New York to win an improbable 1969 World Series title, a team remembered in baseball lore as the “Miracle Mets.”

Next month, a Hall of Fame oversight committee is set to consider Hodges’ Cooperstown credentials on a ballot with nine other candidates. If voted in, he would be inducted in July of 2022 — which means Hodges’ wife, 95-year-old Joan, could still be around to see it happen.

Between now and December 5, when the voting takes place, supporters of Hodges hope a new film will help their cause. 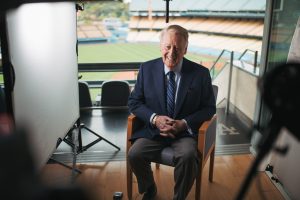 His 71-year-old son, Gil Jr., is among those featured in the new documentary “Soul of a Champion: The Gil Hodges Story,” released this month. The film gives historical context to Hodges’ stellar, often-overlooked statistical career but also recognizes how his Catholic faith molded his character and reached the lives of others.

And for that, prayers are back in vogue.

“I don’t really know where I connect straight to God anyway, but when I say I’m praying for Gil, what I’m really saying is I hope he gets in — for his wife, for his family, for all of us,” Scully told Angelus.

“I honestly think it would add a lot of class to the Hall of Fame,” said Scully. “You can put someone in the Hall for all the home runs they hit and everything else. He played a long time. He had a lot of honors. But he was a great American, a great person, someone who many of us were in awe of because of his spiritual strength.”

Kevin O’Malley, the Major League Baseball Ministry Coordinator at Catholic Athletes for Christ, planted the seeds for a documentary after hearing stories about Hodges, including from Scully while working on a CD recording of Scully reciting the rosary.

O’Malley signed on as one of the producers of “Soul of a Champion” after successfully pitching the documentary idea to Emmy Award winning writer/director David Naglieri and director Rob Kaczmark at Spirit Juice Studios, a Chicago-based media company focused on telling stories rooted in Catholic values.

Those values seem to align with the guidelines given to Hall of Fame voters on how to cast their ballots: “Voting shall be based upon the player’s record, playing ability, integrity, sportsmanship, character, and contributions to the team(s) on which the player played.”

“We don’t say it in the film but hopefully it comes across — voters historically have used that clause in the negative, justifying how to exclude people whether it is steroids or gambling,” said O’Malley.

With Hodges, the opposite may be true.

In “Soul of a Champion,” the former altar boy’s only son recalled how “there was never any question” about whether father and son would be waking up early on Sunday morning to go to Mass. Scully relays several stories about how Hodges’ modest Catholic convictions influenced him and others, even recalling how Dodger players would “refer to him as a saint.”

Scully recalled a time when Hodges refused a hefty steak dinner on a team flight because it was a meatless Friday and, at 20,000 feet, exclaimed, “No thank you, I’m too close to the boss.” 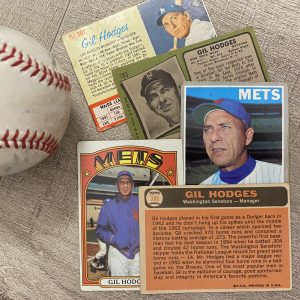 Topps baseball cards of Gil Hodges in the 1960s and 70s made it a point to highlight his character in his bios. The 1971 card above calls Hodges “one of the most respected men in baseball.” A 1966 card below notes “Gil is the epitome of courage, good sportsmanship and integrity.” (Tom Hoffarth)

In his 2005 book, “Praying for Gil Hodges: A Memoir of the 1955 World Series and One Family’s Love of the Brooklyn Dodgers” (Thomas Dunne Books, $22.99), writer Thomas Oliphant alludes in the title to a famous story about how a Catholic priest once encouraged his congregation to do something unusual for the team’s beloved player during a miserable hitting slump early in the summer of 1953.

“It’s too hot for a sermon today,” said Father Herbert Redmond of St. Francis Xavier in Brooklyn. “Go home, keep the commandments, and say a prayer for Gil Hodges.”

By mid-July, Hodges was heading to the All Star Game with a .306 batting average. He finished the season with 31 homers, 122 RBIs and a career-best .302 mark.

Now, Hodges’ Hall of Fame fate rests in the hands of a committee of 16 former players, executives, and writers with expertise in players whose careers spanned from 1950-69. At least 12 will have to vote in Hodges’ favor in order to send him to Cooperstown.

O’Malley says that even if Hodges doesn’t make the cut, the campaign he’s helped lead will “have shown how his life still resonates as a positive example of an athlete who always maintained his values.”

“We want to always prepare future generations, and if I take my 10-year-old son to Cooperstown, I want to point to a Gil Hodges plaque and tell him the story about how he was as ideal a person on the field as off it,” said O’Malley.

Scully, who turns 94 in late November, said there would be no better birthday gift than for Hodges to be voted in and join him in Cooperstown.

“Prayer is hope, and a lot of times you don’t pray for yourself,” said Scully. “So I just pray for him, such a very good man who deserves the attention — even though that’s not what he was about.”