'The one thing that makes it work': An exclusive interview with Vin Scully

If you want to make God smile, tell him your plans.

That’s what Vin Scully is apt to say if asked whether his retirement is all that he anticipated it might be.

“That quote has been so much a part of me, I don’t know when it began,” said the emeritus Dodgers broadcaster, who left the booth after 67 seasons in 2016.

“Maybe as a child I heard a priest say it and it just stuck. It makes good sense. You know, we try to write our own script and it’s a mistake. There’s a script already written for us.”

Today’s script calls for Scully, who will turn 92 the day after Thanksgiving, to make fewer and fewer visits to Dodger Stadium from his home in Hidden Hills.

While he says he misses those stadium workers, broadcasters, players, and fans he often saw on a regular basis, he keeps his focus on what he calls his “unsinkable” wife, Sandi — “a true saint if there ever was one” — as well as his three daughters, two sons, 16 grandchildren and three great-grandchildren.

A 2009 recipient of the Cardinal’s Award from the Archdiocese of Los Angeles for his dedication to his Catholic devotion, and still proud of a CD recording of “The Most Holy Rosary of the Blessed Virgin Mary” he recorded for the Catholic Athletes for Christ, Scully gave Angelus News his time to reflect on a variety of topics during several recent conversations as the MLB playoffs got into full swing:

Tom Hoffarth: How might you spend this month paying attention to the baseball postseason?

Vin Scully: To tell you the truth, Sandi is one of the world’s greatest watchers. Even when the Dodgers had the playoffs clinched [at the end of September], she would stay with those 9-0 games on TV right down to the last out. I’d say, “Honey, how can you do that?” And she’d say, “I want to see how it comes out.” Either way, you can bet we’ll watch every pitch for sure.

Hoffarth: You’ve touched on this many times over the years, but at this point in your life, how does your faith keep you focused on what comes your way?

Scully: Thank God, my faith has always kept things in perspective. Completely. It has not wavered.

As many who have known me know, I’ve had some pain in my life [at age 5 with the death of his father, the deaths of his first wife, Joan, and his son, Michael]. Faith is the one thing that makes it work, makes me keep going. You appreciate what you’ve been given.

You know, this isn’t the only stop on the train. There’s one big one we’re still waiting for. I used my faith to guide me straight and narrow and strong, for sure. I think about that every week when I’m in line going up to the rail to receive Communion. That’s a pretty important moment. It always was and always will be.

Hoffarth: You frequently attended Sunday Mass at Dodger Stadium on game days for many years. You have your own family parish you are able to attend regularly now. What brings you joy about attending Mass?

Scully: I have such a lovely parish, a very extra-warm congregation. It only took about a week to meet all the ushers and the two priests who preside there. I think about the first priest I met there; he had been long retired and he has since passed away, but I said to him one morning: “Hi, Father, how are you?” And he said, “Well, I could be taller.” That just broke me up completely.

Hoffarth: You had a very Catholic upbringing in New York, from Fordham Prep to Fordham University. But there was a story you once told us about how your career — your life — could have changed dramatically back when you were in school at a very young age.

You are a natural left-hander. You played baseball throwing left-handed. You wrote in your scorebook left-handed. But there were perceptions about those who were left-handed in your formative years that could have altered the course of Dodgers history, right?

Scully: (laughing) So way back when I was in my first year of grammar school in New York — I guess I was 6 years old — one of the good Sisters of Charity would whack me across the knuckles with a ruler every time I used my left hand.

Once in a while, out of frustration, they would turn the ruler so I would get hit on the edge, which would break the skin. It’s prehistoric to think of this now, isn’t it? 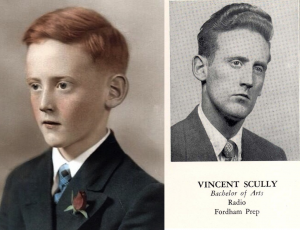 So one night at dinner, I’m home and passing the bread, and my mother saw my beaten-up left hand. She immediately thought I did something wrong and was being punished. Well, 99% of the time she’d be right. This time, she was wrong. I explained how the nuns didn’t want me to use my left hand.

What made it interesting to me when I heard her tell the story years later was that we had a Jewish family doctor named Dr. Rose. He wrote this wonderful letter to the nuns, saying, “If you force this boy to write right-handed, against his natural bent, it could very well cause him to stutter.” And not only that, he finished by writing, “Dear sisters, why would you wish to change God’s work?”

Boom! A grand slam! From that moment on, they allowed me to be left-handed or else that would have changed my life dramatically.

You may remember the movie that came out called “The King’s Speech” [in 2010, starring Colin Firth as England’s Prince Albert]. I only mention this because Prince Albert had a speech impediment and a man working for the BBC had this job of having to clean up his speeches on the radio.

He got to wondering: If stuttering is a sign of frustration, what would the king of the British Empire have to be frustrated about? It happened that he was a natural left-hander forced to be right-handed.

Faith is the one thing that makes it work, makes me keep going. You appreciate what you’ve been given. Click To Tweet

It’s interesting to see how the world is so fixated on right-handed. There’s the term of being someone’s “right-hand man.” When you look at religious pictures, it’s the “right hand of God.”

We say in our prayer of the faithful that Christ is seated “at the right hand of the Father.” There is the story of the crucifixion where there was a thief on either side of Christ on the cross, and the “good one” was on his right.

The little bit I know about the religions around the world, there is the Middle Eastern tradition that the left hand is considered unclean. So I guess it goes all the way back to the beginning of time. But God only knows what I would have done if I had developed a stutter.

Hoffarth: We recently saw an auction that included a letter from December 1949 that you signed, as well as Dodgers owner Branch Rickey, to start your career with the Brooklyn Dodgers. This is just two seasons after the Dodgers added Jackie Robinson to the roster. That contract ended up selling for more than $70,000. How did you feel about seeing that out there? Did it bring back any memories?

Scully: I did get to see a copy of it, and although it looks like something I could have typed 70 years ago — “I agree to do this” and “I agree to do that” — I actually didn’t write it. In those days, they called it a letter of agreement. It was likely something one of the secretaries drew up.

It reads as if I was applying for the job, but I had already met [Hall of Fame booth mate] Red Barber a few weeks prior, and he had sent me to Mr. Rickey, and they drew up this letter. So I really had no personal attachment to it. I think I was on the job at least four years before someone actually drew up a formal contract. 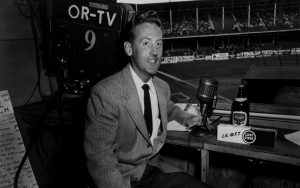 Vin Scully in the Ebbets Field broadcast booth when the Dodgers were in Brooklyn, 1954. (Los Angeles Dodgers)

I do remember meeting with Mr. Rickey. I’m just out of school, sitting there with this famous man with a stub of a cigar as he kept gesturing with it as if he was going to eventually light it. It was almost hypnotic.

He paused a second and then he actually hit the table with his fist and said: “Get a girl, get engaged, and get married.” Boom, boom boom.

You know, this isn’t the only stop on the train. There’s one big one we’re still waiting for. Click To Tweet

Later I understood, from those who were doing far better than I, that in his mind, here was this 21-year-old kid going to be on the road with a lot of time on his hands, surrounded by a lot of famous ballplayers, and the temptations would be tremendous. I never gave it a thought that was the reason. He really wanted his employees to be married.

Hoffarth: Biographies about Rickey indicate that he was a very religious man, from a pious Methodist upbringing who quoted the Bible frequently. Did you get a glimpse of any of that?

Scully: I didn’t know anything about him, except he was such a baseball man, and I got to see a bit about how he was a very devout man by what he was asking me about having a wife or girlfriend.

It was very intimidating for me, a kid born and raised in New York, playing stickball in the streets, going to a grammar school just 20 blocks from the Polo Grounds, getting into games free as a member of the CYO.

I had read about him in the newspapers. And just to complicate matters, I recall having just had a wisdom tooth extracted, so I had a swollen jaw and I was totally anesthetized with the idea of seeing this baseball hero.

Maybe he had just signed Jackie Robinson not long before that to a contract, but I’m sure I was totally insignificant to him in the grand scheme of things. Maybe he was interested in my well-being as a single kid on the road, but really, my contract with him was just a dot at the end of a sentence.