Standing outside the Cathedral of Our Lady of the Angels on an overcast morning, Sister M. Anncarla Costello and Father Parker Sandoval were asked whose idea it was to have them co-curate the cathedral’s new, sprawling “250 Years of Mission” exhibit?

Glancing at each other, they answered, a bit sheepishly: “Ours.”

Once inside, it’s easy to see why. The exhibit’s “Mission” is evident and high-minded, intending, as Father Sandoval explained, to give visitors not only an intimate look at the churches in Los Angeles’ roots, but also a road map with clues that will strengthen it in the future.

Using everything from art and artifacts that harken to the missions’ very founding, to tapestry, painting, and color photography, the exhibit tells a story that Sister Anncarla called a “continuing expression of faith and devotion.”

For both Sister Anncarla and Father Parker, chancellor and vice chancellor (respectively) of the Archdiocese of Los Angeles, the main challenge in telling that story came in the exhibit’s first two words, the “250 Years” part.

Thankfully, the duo had much to choose from, between the archdiocese’s voluminous archives, artwork from Mission San Gabriel Arcángel — the jubilee celebrating its 250th anniversary being a motivation for the exhibit — as well as the USC Digital Library. 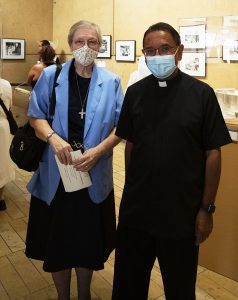 “There were so many wonderful pieces, so many wonderful things. We were just, ‘What’s that? And how about that? Do we want that? OK, and then let’s take that, too,’ ” said Sister Anncarla of the treasure trove at their disposal.

Of course, the thing about treasure is that sometimes it’s hard to find a place for all of it. And despite its venue being the largest Catholic cathedral in the U.S., and though “250 Years of Mission” was afforded four comfortable galleries, there were still a lot of hard choices that had to be made.

“We wanted pieces that were compelling visually because the audience we did this for was not art critics or historians, but for the typical visitor to the cathedral, Catholic or otherwise,” said Father Sandoval. “We wanted to visually draw them in and tell the story of the church for the last 250 years.”

That’s evident in the first gallery, dominated by a large tapestry of St. Junípero Serra, founder of the missions. The tapestry, which was present at St. Junípero’s canonization by Pope Francis in 2015, was created by artist John Nava and is in the same style as the cathedral’s most recognizable feature, also created by Nava: the tapestries of saints that adorn either side of its nave.

Along with Nava’s tapestry, the gallery has artwork and artifacts — baskets, bricks, a branding iron — from the founding and early years of the missions. Included is perhaps the exhibit’s most precious piece, a depiction of the 13th Station of the Cross, painted by a member or members of the Tongva tribe — its creator’s name(s) have been lost to history — that is one of the few existing examples of native Christian art.

Also included is a large oil painting by artist Aurelio G. D. Mendoza, depicting St. Junípero, Franciscan brothers, and the indigenous people who helped build, maintain, and grow the missions, something Father Sandoval found “wonderful since it shows [St. Junípero] alongside the natives in this common project.”

Lucy Mendoza, Aurelio’s granddaughter, who made the painting available to the exhibit, said her grandfather often spoke of his own indigenous roots and therefore it was important to him to “paint them with such beauty and grace.”

Lucy herself was part of that process. In the mid-1970s, at age 12, she was used by her grandfather as a model for one of the characters in the painting — the young girl in the left corner looking directly out at the observer.

“I loved sitting for him, just getting to talk to him and listen to his stories,” said Lucy, who lent this and another of her grandfather’s works — a portrait of St. Junípero — to the exhibit in the hopes that “Californians can learn more about the history of the missions, and perhaps that might strike an interest in learning more about the roots of our faith in the Americas and therefore learn more about Our Lady of Guadalupe.” 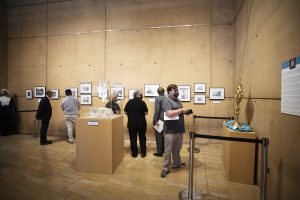 Visitors to the cathedral exhibit view art, photographs, and artifacts, such as the gold monstrance crafted for the founding of the archdiocese (right). (Victor Alemán)

The exhibit offers observers an overview of what the archdiocese grew from. There is a spectacular, and huge, gold monstrance crafted for the founding of the archdiocese (previously a diocese) and installation of Archbishop John J. Cantwell, its first archbishop, as well as historic vestments, habits, and photographs of the wildly popular “Mary’s Hour” devotional event that, at one time, attracted 100,000 devotees to the Los Angeles Coliseum.

One gallery is dedicated to the richness of the archdiocese’s present, one that regularly sees Mass celebrated in 42 different languages. Photos highlighting the diversity of Catholic faith traditions are meant to show us “what the church is now in Los Angeles and, really, what its future is,” according to Sister Anncarla.

The exhibit will be on display until the close of the jubilee year next September, offering the co-curators the luxury of being able to add to and adjust displays over time. There’s plenty to choose from.

“The art comes with a message, because they’re not just great pieces of art, they are teaching us we are all united in Christ. All part of the communion of saints. That’s what we wanted to communicate with our choices,” Father Sandoval said.”

“We did want to intentionally reference our past, building a legacy of faith. But, moving forward, we wanted to show that as a continuing story, today and tomorrow. Yes, the art is beautiful, but it’s beauty that calls us to something greater.”

Art, California Missions, Cathedral of Our Lady of the Angels, Forward in Mission jubilee