The morning of Saturday, Oct. 1, some 2,500 Catholics descended on Christ Cathedral in Garden Grove to pray for their state.

Some did so by walking in the eucharistic procession, while others watched and kneeled with heads bowed low. Local Knights of Columbus members carried a canopy over the Blessed Sacrament, held high in a monstrance by Orange Diocese Auxiliary Bishop Timothy Freyer.

The demonstration marked the kickoff for Respect Life Month, established by America’s bishops 50 years ago to call attention to the need to protect preborn children and other vulnerable members of society. Participants prayed the rosary, heard from pro-life speakers, and took part in a trilingual Mass outdoors.

The rally was also the first major Catholic demonstration in Southern California since the U.S. Supreme Court’s reversal of Roe v. Wade in June, and part of an urgent push by California’s bishops to mobilize Catholics, who make up the state’s biggest religious denomination, to oppose Proposition 1.

The ballot initiative would enshrine the state’s wide abortion permissions into the state’s constitution and guarantee a “right” to abortion until the final moments of a woman’s pregnancy. State voters will decide on the measure, which is backed by Gov. Gavin Newsom, Planned Parenthood, and many medical groups, on Nov. 8.

“We are fighting the power of evil, the power of Satan, and all his death,” Bishop Freyer said at the Oct. 1 rally. “Proposition One is truly evil.”

Later, speakers rallied the crowd in repeating “Yes to life, No to Prop 1!” 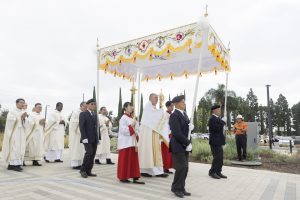 Auxiliary Bishop Timothy Freyer of Orange leads a eucharistic procession at an Oct. 1 Walk for Life event at Christ Cathedral in Garden Grove. (Diocese of Orange)

Since the Supreme Court’s June Dobbs v. Jackson Women’s Health Organization decision, which returned abortion law to the decision of the states, California has moved to fulfill Gov. Newsom’s vow to make the state an “abortion sanctuary.”

Last month, the Democratic governor signed a package of 12 bills broadening access to abortion, strengthening privacy rules for women who obtain the procedure, and helping to cover travel and medical costs for out-of-state women to seek abortions here.

The California Catholic Conference (CCC), the public policy arm of the state’s bishops, has criticized Prop 1 as extreme, expensive, and unnecessary. The bishops say the measure will allow late-term abortions at taxpayers’ expense and note that abortion has long been legal in the state.

While recent polling suggests Prop 1 is headed for victory, the bishops haven’t given up hope.

Last month, they invited Catholics to join them in a Sept. 29-Oct. 7 novena to Our Lady of the Rosary, timed to conclude on her feast day. Bishops from each of the state’s 12 dioceses recorded accompanying messages.

The prayer campaign got a big boost from national Catholic radio network Relevant Radio, which emailed novena invitations to California listeners and has been including prayers for the defeat of Prop 1 (as well as of Prop 3, a similar ballot measure in Michigan) every night on its “Family Rosary Across America” broadcast.

“In his eyes, every human life is sacred. It has meaning, purpose, and dignity,” said LA Archbishop José H. Gomez in a video message for Day Four of the novena. “Let’s keep working for a California that protects the weak and vulnerable, a California where every human life is considered sacred and is welcome and cherished from conception to natural death.”

At the demonstration in Orange County, a broad, multicultural gathering of Catholics expressed outrage that Prop 1 would greatly expand the abortion license. The state has even begun a marketing campaign in states where the practice is restricted, encouraging women to have their abortions in California.

“It makes me want to cry,” said Kathie Hibbard of St. Edward the Confessor Church in Dana Point. “Society is selling a lie that children are a burden. Of course, they are challenging but they’re our greatest gift.”

Vietnamese Catholics, who turned out in large numbers, stressed the need to protect human dignity.

“I escaped Communist Vietnam by boat then went through Cambodia to Thailand. It was a hard journey. Many people didn’t make it,” said Huy Nguyen, parishioner of Blessed Sacrament Church in Westminster. “I take nothing for granted. All life is sacred.” 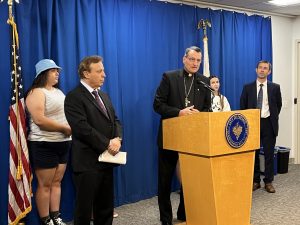 Bishop Joseph V. Brennan of Fresno speaks on Prop 1 at a press conference at Fresno City Hall Aug. 16, where he received criticism on the issue from a city councilman. Bishop Brennan and the councilman later met at a Catholic Charities center, where Bishop Brennan showed him the options the Diocese gives women, children and families in need. (Diocese of Fresno)

In the Archdiocese of Los Angeles, the Office of Life, Justice and Peace is encouraging Catholics to address the state’s abortion crisis through prayer and volunteer service opportunities.

“Prayer reminds us we are united, we are one,” said Gina Vides, who leads parish outreach efforts for the office. “When we are able to fill ourselves with God’s love, we can go out into the community and reciprocate that love to our brothers and sisters.”

The office encourages Catholics to support organizations like the St. Vincent de Paul Society that serve the needy and pregnancy centers that provide medical care and baby supplies to expectant mothers. During Respect Life Week (Oct. 2-7), students in LA’s Catholic schools studied Church teachings on life and dignity and discussed practical ways to build a “culture of life” in their communities.

Vides’ team also is working to spread awareness among Hispanic Catholics. The archdiocese’s largest Latino parish, St. Emydius Church in Lynwood, will host an informational meeting on Prop 1 on Oct. 21. Similar Spanish-language sessions are also planned at St. John the Baptist Church in Baldwin Park and St. Patrick Church in North Hollywood, on Oct. 18 and 20, respectively.

Gov. Newsom has positioned himself as a national leader for the expansion of abortion access. His marketing campaign, which includes billboard advertisements in states like Mississippi, has come under fire for what many perceive as its blasphemous use of the words of Jesus Christ. At least one of Newsom’s abortion ads quotes the Gospel of Mark, “Love your neighbor as yourself. There is no greater commandment than these.”

“To advertise in other states for women to come to California to have their children killed — in the name of God — is demonic,” said Catholic League president Bill Donohue. 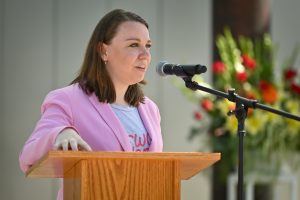 Molly Sheahan, associate director for Life and Family Advocacy for the California Catholic Conference, has been crisscrossing the state to rally support against Prop 1 on behalf of the state's bishops. (Diocese of Orange)

Molly Sheahan, associate director for Life and Family Advocacy for the CCC, says the measure’s $200 million budget for expanding abortion services could better be used on supporting families in a state where surging costs of living are pushing people into despair and even homelessness.

“How coercive of the state to say we will pay for your abortion, along with your flight, hotel, child care, gas money, but if you want to welcome your child you’re on your own,” said Sheahan. “How much more money will be spent on abortion with Prop 1?”

Sheahan has been crisscrossing the state from San Francisco to San Diego. Just days prior to the walk, she spoke at the annual priest convocation in the Diocese of San Bernardino, where Day One was dedicated to life issues and coincided with the novena. Father Benedict Nwachukwu-Udaku helped set aside time for the entire group to pray a rosary for life.

“It was very moving,” said Father Nwachukwu-Udaku, pastor of Sacred Heart Catholic Church, Rancho Cucamonga. “Seeing all of us priests coming together to recite prayers on the behalf of life, for the petition of life, it brought a lot of tears to my eyes.”

Father Nwachukwu-Udaku wants his parishioners to be equally moved, and has added a shrine to the unborn inside the church. Other priests in the Inland Empire are also getting creative with visual aids. Father Juan Martin Escobedo, MSP, pastor of St. Joseph Church in Fontana, had a giant rosary built and strung around the sanctuary. Parishioners are being asked to wear blue, a pro-life color in some Latin American countries. 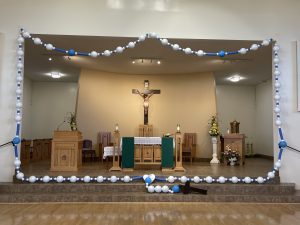 Sheahan credits parishes for doing a good job getting the word out with pew cards and bulletin announcements. While a UC Berkeley poll shows registered voters favor the measure, Sheahan points to a recent Rasmussen poll that found that most Californians are against late term abortions. She believes “there is a strong path to victory.”

If not successful, the state’s bishops say they’ll continue to promote resources for pregnant women through programs like “We Were Born Ready.” But Sheahan said she’s concerned the measure will expand abortions in low income, minority, and immigrant communities, where women already are often pressured into abortions.

“Privileged people push abortion on low-income women, seeing it as a solution for their struggles. It’s patronizing, it’s ignorant, and it’s wrong,” said Sheahan. “Low-income women are far more likely to say they do not want to have abortions than their wealthy counterparts.”

Coryna (last name withheld for privacy) says she was one of those women. The young mother gave her testimony at the Christ Cathedral event, recalling the abortion pressure she experienced. Ultimately she “chose to parent” and credits a pregnancy center for making that possible.

“As a single mom who didn’t have $75 in her bank account, a free pack of 18 diapers just brought me hope,” explained Coryna. “Today I’ve been married four years and have two more beautiful children.”

Lori Loy had her own reason for coming to the walk.

“I lost a son when he was a baby and he’s still so precious to me,” said Loy, parishioner at La Purisima Church in Orange. “Whatever you do, keep the baby or give the baby up for adoption, just choose life.”