After Dobbs, SoCal pro-lifers prepare to ‘help in any way we can’

For years, it seemed like Jim Hanink and other local Catholic pro-life advocates were rebels for a cause going nowhere.

Since the 1970s, they’ve spent hours reaching out to pregnant women, inviting them to reconsider the decision to abort. They’ve handed out flyers, wrangled with elected officials, and rallied the faithful in local parishes to join them in supporting women and families. Hanink and his wife, Elizabeth, a nurse, even helped rent apartments located near inner-city abortion clinics with the hope of saving preborn lives.

But living in the aggressively progressive state of California, the overturning of Roe v. Wade, the 1973 U.S. Supreme Court decision that legalized abortion, always seemed like a remote objective.

“I remember my oldest son asking me not so long ago, ‘You think it’ll ever change?’ ” remarked Hanink, a parishioner at St. John Chrysostom Church in Inglewood who retired in 2015 after four decades as a philosophy professor at Loyola Marymount University.

His answer: “Not while I’m alive.”

The June 24 Supreme Court decision in Dobbs v. Jackson Women’s Health Organization proved Hanink wrong. And while the moment is one for rejoicing, the court’s returning of abortion law to the states also portends a fight that just got much more serious in states like California.

In recent years, Hanink has run for governor as the delegate of the American Solidarity Party, which is pro-family, pro-environment, and pro-life, a position that includes opposing abortion and nuclear weapons.

He expects “there will be the sharpest, strongest backlash” to last week’s ruling in states like California, where Gov. Gavin Newsom has promised to establish an abortion “haven” for women seeking abortions from other states in the country where the procedure can now be declared illegal. 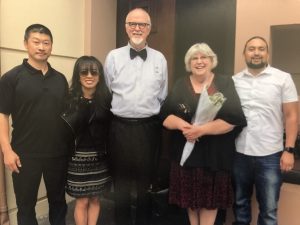 Jim Hanink and his wife, Elizabeth, and their children at their 50th anniversary celebration in 2020. (Submitted photo)

In the Dobbs case, the court not only ruled in favor of the state of Mississippi’s attempt to ban abortions after 15 weeks, but reversed the federal right to abortion established by Roe v. Wade and later affirmed by Planned Parenthood vs. Casey in 1992.

“The Constitution,” Justice Samuel Alito wrote in his majority opinion, “makes no reference to abortion, and no such right is implicitly protected by any constitutional provision.”

They were words that the staff at Los Angeles Pregnancy Services have been waiting a long time to hear.

“For the unborn it means recognition that their lives are sacred,” she told Angelus. “They are a part of the human family and they are Americans with rights.”

“I am grateful to God. It’s long overdue,” said Msgr. Moretta, who has worked for decades to fight abortion in the city’s Latino community. “I have personally cried to heaven to stop this onslaught of the innocent. I believe we as a society are going to be better.”

Mary Huber, who will next month receive the “People of Life Award” from the U.S. Conference of Catholic Bishops, called the ruling a good first step.

Huber, now semi-retired, served as the Diocese of San Bernardino’s director of Respect Life and Pastoral Care programs for six years and worked in the department nearly two decades before that.

“This is not a final victory but certainly a very important milestone,” said Huber. “Americans in general think if it’s legal, it’s moral and yet as Catholics we know abortion isn’t moral. This ruling could affect the overall thinking of generations.”

In the immediate aftermath of the ruling, more than a dozen states have moved to enact to ban or limit access to most abortions. But in California, Newsom and state lawmakers have pledged to spend $40 million in taxpayer monies to make California a “sanctuary” for women in those other states seeking abortions. Newsom has also joined his counterparts in Oregon and Washington in promising to form a “West Coast offense” of increased abortion access common to all three states. 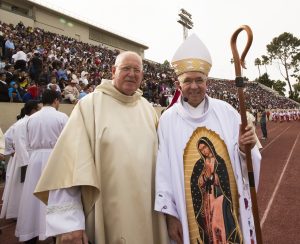 “It’s really a shame that we’ll become a mecca for abortions,” Msgr. Moretta lamented. He called it “unconscionable” for Newsom to offer money to transport women from other states to have abortions in California.

Ordained in 1968, just a few years before Roe v. Wade, Msgr. Moretta has since served on the Right to Life Board of Directors and the Archdiocese of Los Angeles’ Pro-Life Commission, groups that established local pregnacy centers and womens’ shelters.

After Roe, he and his fellow priests started wearing “Precious Circle of Life” rings as a symbol of their commitment to ending abortion. He long ago lost the ring, but he never gave up the fight.

“We [Catholics] are on the forefront of the defense of life. We believe life is sacred from the very beginning to the very end. We should be proud of that.”

Father Edward Molumby, a retired priest in residence at Sacred Heart Church in Rancho Cucamonga, served for 12 years as chaplain at Rachel’s Vineyard retreats helping women and men heal after abortion. He said he’s seen firsthand how the scars of abortion can linger for decades.

“Sometimes there are women who had abortions 60 years ago and it still bothers them,” explained Father Molumby. “They cannot forget the pain and a lot of them think they cannot be forgiven.”

While pleased with the court’s ruling, Father Molumby is concerned about the months ahead.

“In terms of God’s plan, yes, this is good, but the price we’ll pay is unrest,” he said. “I’m worried. I think there’s going to be a lot of violence.” 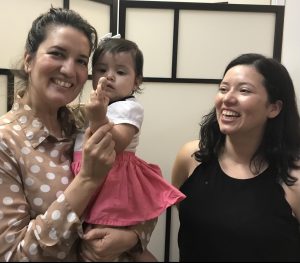 Astrid Bennett (left) with a mother and child helped at Los Angeles Pregnancy Services, of which she is the director. (Submitted photo)

At Our Lady of Guadalupe Church in Chino, pastor Father Edmund Gomez said he will be stepping up his ministry to women and families. Already, he visits abortion clinics in hopes of changing womens’ minds, but he stressed that such work must be done with sensitivity and care. He fears women seeking abortion could still face harrassment.

“We still have to do that one-on-one work,” said Father Gomez. “We put women in really hard situations in our society. They get dumped on a lot.”

Huber believes men and women share equal responsibility for the creation of life, and this ruling brings the law closer to acknowledging that.

“Behaviors are ultimately going to have to change to some degree. If I can’t just go to the store and get an abortion pill, maybe I have to think this through a little better,” said Huber. “Abortion also affects how some men treat women. It strips away his responsibility because it’s her responsibility to have the abortion.”

In preparation of the court’s ruling and its consequences for women, the state’s Catholic bishops, through the California Catholic Conference, recently launched “We Were Born Ready,” an informational campaign to mobilize assistance for those with “difficult and unexpected pregnancies” and help women obtain housing, health care, and other needed services.

Bennett said pregnancy centers also realize their work is more important than ever. She wants expectant mothers to know that the “help arm” of the pro-life movement is ready with more than 3,000 facilities across the nation. She is the founder of The VIDA Initiative, an organization dedicated to training leaders in the Hispanic community.

“Latinos are instinctively pro-life,” said Bennett, herself the daughter of immigrants. “Our culture is a culture that embraces children, loves children, welcomes children. I think Hispanics bring hope because of their strong faith and their love of family.”

According to Father Molumby, those are qualities the pro-life movement cannot afford to lose sight of.

“We need continued evangelization,” said Father Molumby. “We have to find ways of supporting women and supporting politicians. We have to pray for the reestablishment of morality in all its forms.”

Huber said when doing outreach, Catholics should always remember people may carry hurt from past experiences.