Really, do you think you’re smarter than a seventh-grader?

When Derek Brown, Sprint telecommunications’ wireless solutions engineering director, asked that rhetorical question as the launching point of his Aug. 6 keynote address for the C3 Catholic Communication Collaboration (C3CON19), the hundreds of teachers, principals, and administrators from around the Archdiocese of Los Angeles (ADLA) inside the Bishop Alemany High School gym listening may have been wired to agree with that premise.

Because of the variety of ways children today have grown up absorbing information from screens and devices that impact the ways they learn, the archdiocese’s ongoing initiative to expand the use and access of high-tech resources for 21st-century education continues to be a vital part of sharing information about best teaching practices.

To kick off the three-day workshop (where applications and scheduling was 100 percent paperless), Archbishop José H. Gomez said during his morning prayer that “the C3 conference is one of my priorities in the archdiocese. It is important for us to be there for the evangelization of the digital continent.”

C3 project manager Paul Hernandez said the event’s theme of “Bridge The Gap” wasn’t meant to imply there is any sort of large disconnect between teachers and learners in today’s environment.

He said the goal of the event is not simply to impart more knowledge about how technology interfaces with current teaching methods, but also to look at how to spread that information through their schools on various levels.

“We wanted to make sure we didn’t include the word ‘Tech’ in ‘Bridge The Gap’ because technology is here and it’s already happening, and we don’t have to emphasize or focus just on that anymore,” said Hernandez.

“Also, when you say ‘tech’ in this instance, a principal might say, ‘Let me send my tech director or computer teacher.’ We want to take all those walls down. This is for everyone in the archdiocese.”

This year’s C3 drove that point home by unveiling a new multipurpose van available for use starting this fall with elementary schools. The “Maker Vehicle” will be able to tow a trailer carrying a 3D printer, machines that do heat transfers, and projects with building blocks.

Archbishop Gomez blessed the van after Tuesday’s keynote address, sprinkling it with holy water, after which Hernandez gleefully brought out a bottle of champagne to spray it down in celebration. 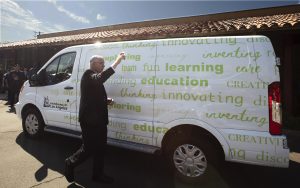 Dozens of sessions were offered at the eighth incarnation of C3, which due to expanded participation this year moved from the campus of Loyola Marymount University to the new site in the San Fernando Valley.

Some were as elementary as how to fill out a school profile and create a student-parent handbook on the ADLA website. Others taught advanced use of the Online Learning Academy at the ADLA, how to use WorkSpace, STAR resources, the Google Applied Digital Skills curriculum and Microsoft Innovative Educator. Interactive sessions focused on how to make STEAM come alive with the use of LEGO blocks.

During a presentation called “Teachers Using Technology to Reach the Digital Native,” Sherry Hayes-Pierce, a Redondo Beach-based Catholic social media strategist at ChurchSocialTips.com and CatholicMom.com, opted to start her panel discussion in a very low-tech way.

Hayes-Peirce had each person take a blank white sheet of paper and gave them simple instructions on how to fold it several times in half and diagonally, tear off a corner, then show their finished product. Only one person in the classroom did it as it was intended by her direction.

“This is why technology has to be a part of your teaching curriculum, because the kids of today don’t do well with just listening to lectures,” said Hayes-Pierce, who was participating in her third year at C3.

“I know for some of you it’s scary. But what does our faith tell us about sharing the good news? We have to meet people where they are. Our young people are in technology.”

A better overall understanding about the effects of technology were just as important to delve into.

Alessandro Disanto, a Chicago-based University of Notre Dame graduate who left a Wall Street job to co-found the Catholic prayer-based app Hallow less than a year ago, explained during Hayes-Peirce’s session about how he has seen young people suffer stress from technology addiction.

Even so, they trust that technology can help pull them out of bad situations, even if the inclination of the instructor or parent is to take that wireless appendage away from them.

“They’re used to consuming information with digital, so it feels like a trusted source,” Disanto said. “This app is still the meet-them-where-they-are model. If you are going to have your phone every day, and we’re called to pray without ceasing, you might as well have a resource on there to do what you’re supposed to be doing.

The C3 program has been funded with resources by Sprint under the archdiocese’s Educational Broadband Service (EBS) spectrum, licensed to the archdiocese by the Federal Communications Commission (FCC).

C3 has become the umbrella for education and ministry technology since pilot programs started with select schools in 2009, and led to a program in 2015 in which smartphones were given to all clergy.

As Sprint’s Brown explained in his keynote speech, the history of advanced technology in the archdiocese goes back to hiring Dave Moore in 1965 to implement television in the classroom at a time when TV was considered the “advanced technology” more than 50 years ago.

Moore remains on the archdiocese’s staff today as its director of telecommunications and a coordinator for the Sprint partnership.

Sprint’s 5G application with expanded bandwidth and speed frequency will soon come to Los Angeles, as it is being tested in various other cities. The concept of IoT (Internet of Things) will be second nature as well to today’s seventh-grader who only knows a life where technology and cellphones are a resource.

Sprint also gave everyone in attendance a new BBC micro:bit, a programmable pocket-sized mini-computer students can connect to a smartphone or iPad.

The BBC micro:bit has motion detection, a built-in compass, and Bluetooth technology, which when it was developed was given free to every child in the seventh grade or equivalent across the UK in 2016.

Karina Mendez, principal at St. Turibius School in downtown Los Angeles, said she loved hearing her teachers talk about the fun they had in the creative spaces and were already discussing ways to engage their students with the new apps.

“Every session was not only an opportunity to get out of our comfort zone and try a new tech tool, app, or creative approach to learning or thinking, but most importantly we walked away with great applicable ideas to equip and empower our students in a fun way,” Mendez added.

“I walked away feeling excited and empowered myself, but now that I have a micro:bit, I really want to brush up on my coding skills, so maybe then I can say that I feel smarter than a seventh-grader. I am up for the challenge.”