ROME — Over the past few days, three perceived “problem priests” have dominated Catholic headlines in Rome and around the world. To recap, here are the offenses that have been at issue.

Now, here are the punishments that have been doled out in the three cases.

Intuitively, most people probably would regard the sexual and spiritual abuse as the gravest offense of the three listed above, and thus would assume that’s what triggered the correspondingly most dramatic penalty of laicization.

In reality, that’s not at all the case — and therein lies the tale. 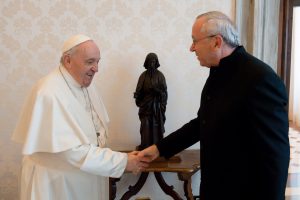 The three priests we’re talking about are Jesuit Father Marko Ivan Rupnik, a celebrated Slovenian artist whose mosaics adorn churches in the Vatican and around the world; now ex-Father Frank Pavone, a longtime, and deeply controversial, leader in the pro-life movement in the U.S.; and Father Luca Favarin, a well-known social justice priest in Padua, Italy.

Recently, a series of revelations have swirled around Father Rupnik. He’s been accused of chronic sexual exploitation and spiritual manipulation in a community of women religious in Slovenia in the 1990s where he served as chaplain; in a recent interview with an Italian news outlet, one former nun described her experiences with Rupnik as a “descent into hell.”

The 68-year-old Jesuit also reportedly offered absolution in the confessional to a woman with whom he’d had sex, an offense for which he was briefly excommunicated by the Vatican in May 2020, but the penalty was lifted the same month after he repented. The Vatican said an investigation regarding the charges from Slovenia couldn’t proceed because it’s been “prescribed,” meaning the statute of limitations has run out, though the Vatican has waived that provision in other cases.

Meanwhile, the Jesuits have announced restrictions on Father Rupnik’s ministry, including the bars on confession and spiritual direction, as well as a requirement that he get permission for public activities.

Father Pavone, meanwhile, has been laicized without the possibility of appeal, according to a Dec. 13 letter from the papal nuncio, or ambassador, in the U.S. to all American bishops. Offenses cited in the letter included blasphemous communications on social media and persistent disobedience to his bishop, widely understood to refer to Father Pavone’s partisan political activity, including his militancy on behalf of former President Donald Trump.

The decision was the culmination of a long-running battle between Pavone and a portion of the American hierarchy that’s stretched over the better part of 20 years.

Father Favarin is a well-known figure in northern Italy, where he runs a series of centers for migrants, refugees, recovering alcohol and drug addicts, former prostitutes, ex-convicts, and other marginalized populations. To fund the activity he founded a series of for-profit businesses, including a popular restaurant in Padua called “Strada Facendo” (“Along the Way”) and a pub called “Versi Ribelli” (“Rebel Verses”). 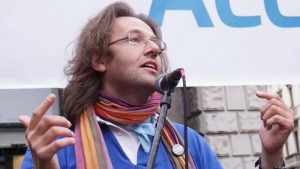 Although Father Favarin is openly pro-gay marriage and also pro-assisted suicide, what got him suspended from the priesthood were objections from his bishop to his business activity, including concerns over financial transparency. In various interviews, Father Favarin has suggested the suspension is the last straw and he’s likely on his way out of the priesthood altogether.

Comparisons among these three problem priests are an apples-and-oranges exercise, since the circumstances vary considerably. Still, the question presents itself: If Father Rupnik committed what most observers would regard as the worst crime, why has he, at least so far, received the lightest punishment?

For one thing, Fathers Pavone and Favarin were diocesan priests, meaning under the direct jurisdiction of the local bishop. Father Rupnik is a Jesuit, and under Church law religious orders traditionally enjoy what’s known as a “just autonomy of life.” Complaints bounced around among local authorities, Father Rupnik’s Jesuit superiors and the Vatican, with no one taking clear responsibility until late in the game.

In addition, the cases against Fathers Pavone and Favarin probably seemed more clear-cut because they involved manifest, and public, disobedience to a bishop. Father Pavone has accused his own ordinary, Bishop Patrick Zurek of Amarillo, of dishonesty, and flatly refused to even meet with him; Father Favarin was ordered by Bishop Claudio Cipolla of Padua to withdraw from his commercial activity, and promptly announced his refusal on Facebook.

In the hierarchical culture and jurisprudence of the Catholic Church, disobedience to legitimate authority is never taken lightly, and when it’s done out loud and in clear public view, it’s akin to the sin against the Holy Spirit.

Whatever else Father Rupnik may have done, no one — at least to date — has accused him of direct disobedience.

Finally, Father Rupnik’s case also doesn’t involve sexual “abuse” as the Catholic Church has come to define it, because, so far as we’re aware, no minors were involved. While the Church has developed clear policies when it comes to sexual contact with minors, the same coercive and exploitative behavior with adults generally triggers a much less structured and predictable response.

Needless to say, these are explanations, not excuses.

If the Church wants to convince the world that it’s serious about “zero tolerance,” it will face growing pressure to ensure that justice is as definitive for all forms of sexual abuse and coercion as it is for publicly dissing a bishop — otherwise, people will legitimately wonder just who the system is really trying to protect.