At LA Archdiocese, immigration outreach is no ‘single-issue mission’

Long before he came to the Archdiocese of Los Angeles as its director of Immigration and Public Affairs, Isaac Cuevas had his own immigrant’s story.

At the age of 2, he found himself leaving a small town about three hours north of Mexico City to come to the United States with his mother. Having grown up in a Catholic family, his mother felt shunned as a single parent and wanted to start a new life.

They arrived with a tourist visa, overstayed, and became undocumented for many years. During the Reagan administration, as new legal pathways for citizenship were created, Cuevas was able to apply and become a U.S. citizen.

Then, as he grew up in an evangelical church, he converted to Catholicism when he married 19 years ago. 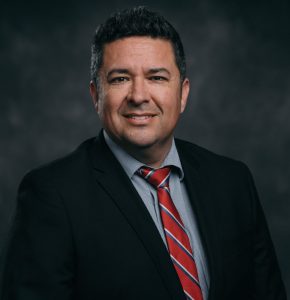 At this point in his journey, Cuevas, who has been with the archdiocese’s immigration office for the last three years, admitted to having a little bit of an identity crisis.

“Sometimes I feel that because I didn’t grow up Catholic, I’m not ‘Catholic enough’ for this role,” said the 43-year-old, who grew up in the San Fernando Valley and went to Cal State University Long Beach. He and his family are parishioners at Holy Angels Church in Arcadia.

“And since I spent almost all my life here, I don’t feel like an immigrant, but there are many immigrants who come here and say they don’t feel ‘American enough.’ They may have citizenship, but they could have an accent or a language barrier that inhibits them from feeling more ‘American.’

“The irony in all this is, I think, is that it’s one thing who we are, and it’s another how we feel.”

Archbishop Jose H. Gomez, who was born in Monterrey, Mexico, and became a U.S. citizen in 1995, identifies closely with the work done by Cuevas’ department, part of the archdiocese's Office of Life, Justice and Peace. It states its mission to address and advocate for “the concerns of immigrants … as the Gospel calls us to welcome the stranger among us.” 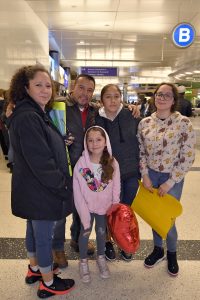 The Arredondo family was reunited after being separated for more than 1 1/2 years. The reunion was made possible through joint efforts from the Interdiocesan Southern California Task Force on Immigration, church volunteers, and Kids in Need of Defense (KIND) in Los Angeles. (John McCoy)

“As an immigrant himself, Archbishop Gomez sees how impactful these people are to the fabric of our society and his goal has always been comprehensive immigration reform,” said Cuevas, who left his previous career as a studio executive at Warner Brothers specializing in entertainment marketing for a chance to bring his communication skills and personal background to focus on immigration campaigns.

“Archbishop Gomez has been a voice of leadership and support, and the understanding of accompaniment, and I like to think of our office as the first step of accompaniment — the immigration equivalent of a 411 call when people don’t know where to start or what to do next.”

More of a community resource center than an actual service provider, Cuevas said his office has been able to provide education and advocacy to thousands in Southern California from one-on-one help through the expansion of larger workshops.

Among the key tools available to help is the possibility of some financial assistance through the Cardinal McIntyre Fund for Charity, which counts among its beneficiaries those in the application process of the Deferred Action for Childhood Arrivals (DACA) program started by the Obama administration in 2012.

As new information needs to be researched and synthesized, the immigration office counts on the help of people like Vivan Kambe, a student volunteer going into her senior year Regis University in Denver as a peace and justice major. Kambe, who calls St. Bede The Venerable Church in La Cañada Flintridge her home parish, said she was drawn to the opportunity at Cuevas’ office this summer after having formed bonds with college classmates with DACA status.

“Growing up in my community, I didn’t know that many people who were immigrants,” said Kambe. “It’s one thing to hear their experiences and then compare them to what I experienced, hearing about things they worry about that would never register in my mind. 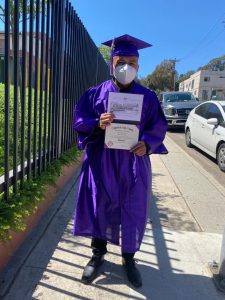 “I’m learning more and more how this is integrated in our Catholic faith. There is so much more that can be done now. I don’t think we can ever have enough advocates for this cause.”

Through the ITF, another valuable resource is access to a group of pro-bono lawyers active in pushing for immigration reform.

Most recently, Dakin-Grimm was instrumental in facilitating a case involving Lucas Ruiz, who arrived in the U.S. as an unaccompanied minor from his native Guatemala in 2016 and graduated last month from Cathedral High School. He awaits his green card with a goal to join the U.S. Army. 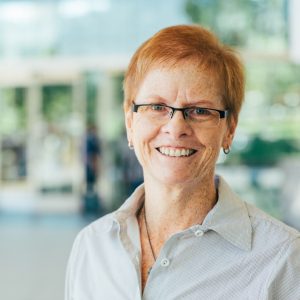 Dakin-Grimm discovered Ruiz’s case could be addressed by a seldom-used Special Immigrant Juvenile Status, a U.S. law since 1990 that applies to children abandoned, abused, or neglected by parents in their home country. His case was referred to her through Kids In Need of Defense (KIND), which partners with the archdiocese.

“There are a million documented people living in the Los Angeles area, and maybe 90% have no current way to normalize their situation,” said Dakin-Grimm, whose book, “Dignity & Justice: Welcoming The Stranger at Our Border” (Orbis Publishing, $24), comes out in September.

Dakin-Grimm agrees that while there are many confusing messages about how immigration in the U.S. works, DACA remains only a policy that can be changed, and Temporary Protective Status (TPS) is a law that could be helpful to others, her objective is focused on the bigger picture that the Immigration Task Force can address.

“The immigration office isn’t a single-issue mission; one policy or law doesn’t have more merit than the other,” said Dakin-Grimm. “Over the last decade, this issue has grown into something bigger. The coronavirus (COVID-19) crisis has already impacted people of color hard, but perhaps the undocumented community has been hit harder because it doesn’t have the same level of resources than others.”