Late in the evening on Wednesday, Jan. 22, Fernando Arredondo stepped off a plane at Los Angeles International Airport (LAX) and found himself in a deep embrace with his three daughters (ages 17, 13, and 7) and his wife, Cleivi, with tears of gratitude in his eyes and a smile he could not contain.

“Gracias, gracias a todos,” he said out loud while hugging each daughter, carrying a weeping and tired 7-year-old Alison in his arms, and kissing his wife on the lips. “Thank you, thank you, God, and thank you, everyone. This is a miracle.”

The reunion with his family came one year and eight months after U.S. immigration authorities separated him from his then-12-year-old daughter Andrea when they presented themselves at the U.S.-Mexico border crossing in Laredo, Texas to request asylum on May 16, 2018.

A few days earlier, Fernando and Andrea had been taken off a bus by Mexican authorities in Mexico, leaving his wife and the other two daughters on board, split three ways as a result of decisions by Mexican and U.S. immigration authorities.

They are now back together in Los Angeles. 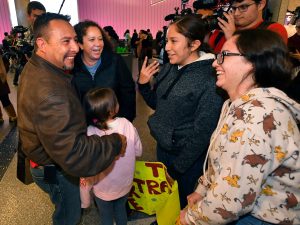 Fernando Arredondo Rodriguez with his wife Cleivi and their three daughters Jan. 22 at LAX. (John McCoy)

It was a very long road to this moment, one that took a lot of help from the legal organizations that challenged the federal government’s “zero-tolerance” border policy in court, as well as the Catholic officials and volunteers who personally helped Cleivi and her three daughters settle in Los Angeles, and the lawyer who represented them in court.

There were eight other deported parents who returned to the United States on Fernando’s flight.

All were allowed to enter the U.S. after a judge ruled in September 2019 that they had been unlawfully deported back to Central America by the U.S. government despite having viable asylum cases and after being separated from underage children they traveled with at the height of the family separation policy of 2018.

In total, these nine parents, plus two who have not returned yet, are the only ones expressly allowed back out of a group of 470 parents deported without their sons and daughters. Another group of 30 came back to the U.S. on their own and presented themselves again at the border to be reunified with children that had been left behind.

It is indeed close to a miracle, admitted Linda Dakin-Grimm, the pro bono legal advocate representing and assisting the Arredondo family as part of joint efforts between the Interdiocesan Southern California Task Force on Immigration, church volunteers, and Kids in Need of Defense (KIND) in Los Angeles.

“At the beginning, I had very little optimism that we would be able to bring him back because the remedy that the U.S. authorities designed for the parents that were already deported was very difficult to achieve: It determined that only “rare and unusual” cases would be allowed back. I told Cleivi that I would do my best, but I did not want to give her false hope,” said Dakin-Grimm.

While an army of public interest and pro bono lawyers litigated on behalf of the parents and other separated families, working for almost two years to identify and locate parents and children, others were helping some of these families or unaccompanied children to survive in the U.S. There were practical issues, like getting them a place to live, helping them with basics like furniture, clothes, and food.

Cleivi had turned herself in to immigration authorities with her eldest daughter Keily, then 15, and her youngest, Alison, who was only 5 at the time they fled Guatemala as a family. She had no news from Fernando and 12-year-old Andrea for close to 20 days while she was in a family shelter in San Antonio.

While there, she got help from a nonprofit organization and was able to locate her daughter at another shelter. She was not able to talk to Fernando, who was locked for three months in four different detention centers until he was finally deported back to Guatemala in August of 2018.

He had failed a “credible fear” interview by immigration authorities, while his wife and daughters had passed theirs at the border, and was denied the chance to apply for asylum.

However, Fernando had been deported in violation of San Diego Federal Judge Dana Sabraw´s order to the Trump administration to suspend the “zero tolerance” policy and a restraining order to stop deportations stemming from that policy. It took another order by Judge Sabraw in late 2019 to force the federal government to allow for the return of Fernando and the other eight deportees.

When Dakin-Grimm took the family’s case, she reached out to the Archdiocese of Los Angeles for help finding the family a home, said Lucy Boutte, a volunteer with the Immigration Task Force, who works with San Gabriel Episcopal Vicar, Auxiliary Bishop David O’Connell of the San Gabriel Pastoral Region.

The bishop personally provided for the family’s monthly rent, as well as the move-in deposit, for a house in South LA, and a variety of volunteers, including Berta Cardenti and Jeff Hamilton, have helped with translation, transportation, finding and transporting donated furniture, and keeping in touch with the family.

“I started by translating for Linda,” said Cardenti as she arrived with the family at LAX on Wednesday night. “But now I feel they are part of my family, we have become friends and we are close to each other.”

Msgr. Jarlath Cunnane, chair of the Immigration Task Force and pastor of St. Cornelius Church in Long Beach, traveled to Guatemala to accompany Fernando back to Los Angeles. He explained that the task force “has been doing whatever we can to make the Church present” in the lives of immigrant families.

“We have been coordinating with KIND, working with Catholic Charities, as well as parishes and individuals in helping this and other families, and now that they are together again we will continue to support them in many different ways,” he said.

The family has been through a lot, said Cleivi, who recounted the original reason her family decided to leave Guatemala in the first place: the murder of her son and eldest child Marco Antonio at 18 years old.

“My son Marco Antonio Arredondo was killed on April 18, 2018, in front of my mother’s house. His sister Keily, who is now 17 years old, was by his side when a guy came and shot him repeatedly,” the woman said.

The Arredondo’s decided to flee the neighborhood out of fear for the safety of their family, especially Keily, who had witnessed the murder. But there was another problem.

“We couldn’t leave right away because my mother was dying of cancer,” explained Cleivi. “At the end of May, she died and we decided we had no business being there, it was no life for us.”

In one declaration made by Fernando filed with the family’s asylum claim, he recounted how he and his son Marco worked as part of a neighborhood watch for their Guatemala City neighborhood to prevent the Mara 18 street gang from infiltrating it.

This appears to have led to Marco’s murder and to further threats against the family, who tried to move far away but kept receiving threats from gang associates. He was also suspicious of the police which, he says, “is corrupt and infiltrated by gangs.” The family had no choice but to leave.

Now in Los Angeles, Fernando will join his family’s asylum claim, according to Dakin-Grimm, and will probably have a merit hearing by next year. “They are a family, they have one story to tell,” she said. 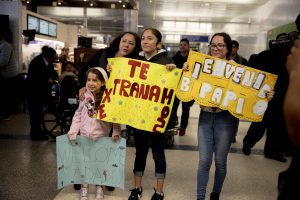 Daughters Keily, Andrea, and Alison prepared handmade signs to receive their dad at the airport. The signs, using red glitter, yellow and green cardboard, and big letters read, “Daddy, we miss you” and “Welcome Daddy” in Spanish.

Little Allison, who has acquired considerable English-speaking skills in her short time in the U.S., wrote in English: “Welcome… Daddy.”

As a celebratory meal, Cleivi made “pipian,” a mole-style sauce typical of Guatemala. They were all going to San Diego on Friday for his Immigration and Customs Enforcement (ICE) check-in appointment. Church volunteers were driving them there, and hope to continue being a resource to the family as they navigate their new chance in the U.S.

“What’s the first thing the family will do together?” people asked Fernando.

“We are all going to stay very close together,” he said. “We are blessed.” 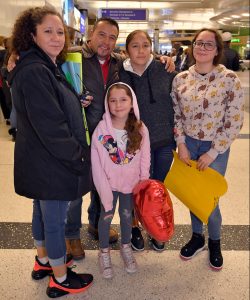 Fernando Arredondo Rodriguez with his wife and their three daughters after reuniting Jan. 22. (John McCoy)