As a teacher at St. Dominic Savio School in Bellflower, Jessica Jaramillo believes her duty isn’t just to teach, but also to enlighten her students about what is possible for them in the future. That is why, she said, she never misses an opportunity to remind them of the importance of a college education.

Yes, whether it’s while cleaning up after finger painting or preparing for show-and-tell, Jaramillo makes sure her students are well aware of college.

By the way, Jaramillo teaches kindergarten.

If you think that’s a little early to be talking about university life, Jaramillo will tell you some kids never get the college talk. She knows, because she was one of them. For her, growing up, college wasn’t a possibility; it was barely a reality. 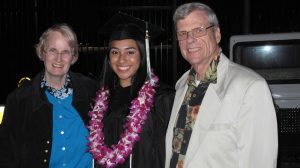 Jessica Jaramillo with Gary and Marjorie Krauss, the founders of Ascending Lights.

“I grew up in LA, low-income, my parents always made sure we got good grades, but college was never talked about,” she said. “I didn’t even know I wanted to go to college because I really didn’t know what it was or how to get there.”

Today, Jaramillo not only counts herself a college graduate but one with a master’s degree from Loyola Marymount, an amazing turn of fortune brought about by an organization that’s been helping shape stories like hers for three decades.

Formed in 1992, Ascending Lights provides community college scholarships and financial support to students who would likely not have access to higher education. Once in college, Ascending Lights then provides one-on-one mentoring to those students, helping to assure they succeed.

It’s an exceptional record of success that sprung from the depths of local history. It was in the wake of the 1992 Rodney King civil unrest that Catholic convert Gary Krauss and his wife, Marjorie, decided they needed to do something to help raise up the underserved and often neglected children living in Los Angeles’ poorest, sometimes most violent areas. 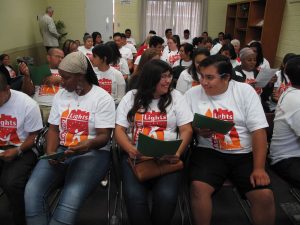 Ascending Lights students at a Christian leadership training event at the De Paul Evangelization Center in Montebello in 2014.

Their solution was education, which, frankly, was not a new solution. The numbers are quite clear that the higher someone goes educationally, the more likely their success economically. What distinguished the Krauss’ approach came from a conversation with Bishop David O’Connell, who at the time was pastor at St. Frances Cabrini in South LA.

“He told us we needed to do a couple things,” said Krauss, who quit his senior-level job in the corporate world to head the charity. “First, to look at the community colleges that are often overlooked because people tend to focus on the [four-year] universities. But community colleges are an incredible resource.”

Bishop O’Connell also told them that simply getting kids from poorer areas to college was likely doomed to fail since virtually all of them came from socioeconomic backgrounds that could not support the multiyear commitment required to succeed in college.

He told them the scholarships they provided would not just have to provide for tuition and books, but supplies, computers, and essentials like transportation and food.

“Probably most importantly, he said the other thing we had to do was provide mentors to these kids,” Krauss said. “Mentors who could help them through the entire process because most of them come from backgrounds that don’t understand higher education.”

Indeed, it’s the mentors who are the key and constant cog in what Krauss calls Ascending Lights’ “whole cloth” approach. The organization has worked with at least 28 urban area parishes in the Archdiocese of Los Angeles, along with dozens of churches from other denominations, to identify candidates for the program who “demonstrate an authentic Christian faith and strong leadership skills.”

Once identified, the students are matched with mentors who not only provide tutoring, but become life(time) counselors and advocates.

Missy Griffin has been a mentor with Ascending Lights for 15 years. Though her bachelor’s degree in mathematics comes in handy in tutoring, since most of her students need help in that area, she immediately saw that her duties would extend well beyond the classroom. 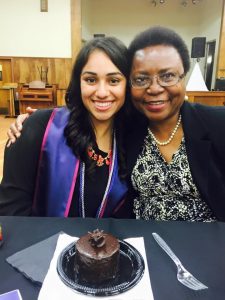 “If there’s a family crisis, something happens at work or in the home and you don’t address that, it derails everything else,” Griffin said. “Ascending Lights wants you to take a holistic approach.

“A lot of our students have jobs with long hours, and they’re also expected to help out at home, maybe provide child care. The challenges they face, what they have to overcome, it requires so much grit and courage, I really admire and have learned so much from watching them. That’s why they deserve someone willing to advocate for them, help navigate their educational journeys and be willing to cheer them on.”

And the cheering never stops. Jaramillo said her mentor, Esi Mathis, has always been there for her, providing not only academic advice but “tutoring me in life.” The two spoke not only about classes and papers but about family matters and relationships.

“She has always been a phone call away,” Jaramillo said. “I was always accountable to her and she has always known what to say, always had something to tell me. From the beginning it was more than academics, it was as if I had another best friend. She helped me challenge myself and ultimately grow.”

And Mathis, along with the Krausses, have been there to witness Jaramillo’s growth: at her graduation from Loyola Marymount, her wedding, and even her son’s baptism.

“It’s like having another set of parents,” Jaramillo said. “[Ascending Lights] is set up for college but it ends up being something that follows you your whole life.”