Archbishop José H. Gomez has a message for Los Angeles Catholics this week, particularly those planning to attend the OneLife LA Walk for Life on Saturday: Fill our cathedral to pray for the unborn.

The annual Requiem for the Unborn at the Cathedral of Our Lady of the Angels will be celebrated at 5 p.m. following the OneLife festivities taking place just over a mile away.

“Whether you and your parish community attend the Requiem as closure to our OneLife LA event or come to the cathedral simply for this meaningful liturgy, it is my hope that we will fill the cathedral to capacity in a powerful expression of our united commitment to life,” he said in a letter to parishes last week.

The Shantigarh Requiem for the Unborn, composed by John Bonaduce, is an annual tradition. Twenty-five years ago, Licia Nicassio, then-director of the Respect Life Ministry in the Archdiocese, attended a prayer service featuring original music from the Catholic ensemble Shantigarh, which still performs today at the 5 p.m. Mass on Sunday nights at St. Bernardine of Siena Church in Woodland Hills.

Nicassio and the Archdiocese adapted the prayer service into the official Respect Life Liturgy, and “went on the road,” said Bonaduce. As attendance numbers swelled over the years, the Mass was celebrated in hotels in Pasadena, conference centers in Long Beach, and local churches throughout the archdiocese. 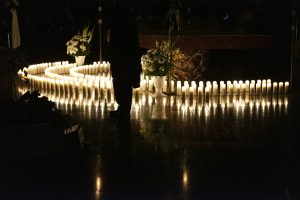 Candles lit in remembrance of all the innocent victims of abortion. (Victor Alemán)

In 2002, when the Cathedral was completed, the Requiem found its home. With a few changes requested by Archbishop Gomez, the Requiem Mass is now celebrated as a vigil Mass, fulfilling the Sunday obligation for practicing Catholics.

Each year, Bonaduce prepares the liturgy without knowing who will be singing in the choir, presenting a “wonderful musical challenge,” as he calls it.

“Singers who first sang as high school students come back as adults — even from points all across the country,” he said. This year, one of the singers is flying in from the University of Notre Dame in Indiana.

“The Requiem is one way in which the Church makes its position on life issues absolutely clear,” Bonaduce said. This spiritual clarity has garnered support from many organizations, including the Knights of Columbus, who provide an honor guard for the candles lit in remembrance of all the innocent victims of abortion. Rt. Rev. Alexei Smith, Ecumenical & Interreligious Officer of the Archdiocese, organizes a delegation of representatives from different faith traditions who share the same commitment to life.

“In recent years, we have forged an enduring relationship with our sisters and brothers at OneLife LA,” said Bonaduce. “The integration of their celebration of life with our Mass has been satisfying on many levels. It is appropriate that our public demonstrations of faith conclude in our beautiful Cathedral, which serves as a ‘house of prayer for all people.’”