Are you called to be a mystic?

A Catholic knows they are called to union with God, no exceptions. We crave it, we desire it.  As St. Augustine would describe, our hearts are restless for it.

We recognize persons who have touched such a loving union as a “mystic,” and many of them have a gift to be able to witness to us the transcendent beauty and wisdom that flows from such an encounter.

Angelus contributing editor Kathryn Jean Lopez’ “A Year with the Mystics: Visionary Wisdom for Daily Living” (Saint Benedict Press, $28.99), offers a much-needed road map drawn up by ordinary Christians to assist us on our spiritual journey. Here, Lopez talks about her new book with Kris McGregor. 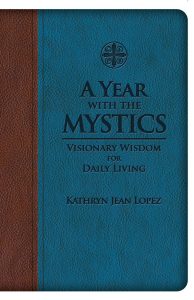 A Year with the Mystics

Kris McGregor: “A Year with the Mystics” is the work that I’ve been waiting for, for a long time.

Kathryn Jean Lopez: And I’ve been waiting for it for a long time, too. It took me forever to write it while I was doing my other work. When I suggested that Saint Benedict Press publish it, I wasn’t volunteering myself.

At the time, I was reading a lot of mystics. I was always ripping a quote from Magnificat to save for later. In my huge purse I was lugging around books from the Classics of Western Spirituality Series by Paulist Press. Now I have one convenient volume with all of my favorite saints and other holy people, and I can give my back a rest.

McGregor: All the mystics in your book communicate God’s love, don’t they?

Lopez: Yes. And the reason I included Father Donald Haggerty and another person alive today is because I want people to know that this love is not something in the past. We are still called, each one of us, to union with God.

But we need to pray more. So much is going on in the Church and in the world. Every time there’s a mass shooting or a tragedy, everyone does the “thoughts and prayers” thing. And now there’s pushback. People are saying that God’s not listening or that prayers aren’t working.

I think this calls for an examination of conscience. We should be asking ourselves, “What more could I be doing to live in an intimate relationship with God?”

McGregor: Wouldn’t you say that because we’re not praying, we’re in this period of chaos? And all the saints you have in this book lived through a period of chaos, didn’t they?

Lopez: Yes. And what you see in so many of the people I selected, if not all of them, is that the passion of Christ became real to them because they saw that was what they were living, and that was what was making them more like Christ.

I do hope the book demystifies mysticism a little bit. When people hear the word “mysticism” they think of stigmata and all these strange things. But in reality, these writings are about getting to know God from people who really spent time with him, who really, truly prayed.

McGregor: You’re talking about demystifying mysticism, but we all, when we said yes to God like Our Lady, walked through the door into mystery, “mysterium” in Greek. The Latin term for it is sacrament, essentially. So as you say, we all are called to union with God.

It drives me nuts when people make it sound as though the mystics are on some mountaintop. Take Caryll Houselander. She suffered from depression and had all kinds of struggles. She lived through both world wars. She was trying to figure out what was going on, and so she tapped into the mystery that had been given to her because of her yes. Is that what you found when you were reading the mystics?

Lopez: Yes, absolutely. These were people who knew the realities of life, like Caryll Houselander. This book gives a little taste of her love for God and his love for her. And once you start having that experience of God’s love, you see that it isn’t a nice thought; it’s real, and it really transforms your life.

McGregor: The mystics are very practical people. What do you see them doing, when you really look at their lives? They’re feeding the hungry, clothing the naked, helping the poor. Even in the cloister or the monastery they are taking care of others. They’re always responding because they’re always seeing a need.

Lopez: That’s why I thought it was important to include people who, like Mother Teresa, were very practical in the world. But everything that she did, she did because she loved Jesus, you know?

That was who she went back to, and stayed with, and had just the deepest relationship you could ever imagine, right? But you don’t have to imagine it. You’re being invited to go deeper into it.

I’m forever seeing people on the street — some who are asking for money or food, some who are just passed out — and God is constantly inviting me to show them his love. Showing God’s love is not just about throwing a dollar at a person. It’s about looking him in the eye, shaking his hand, or asking his name.

It’s hard, but I think it’s part of our ongoing conversion. Obviously, we have to be safe and prudent, but the more I pray and ask the Holy Spirit’s guidance, the more I experience what Mother Teresa and so many other saints have said about seeing God in the poor.

McGregor: Even in the Catholic Church right now, many are homeless. You mention this in the introduction of your book, where you quote Pope Benedict XVI asking Catholics, “Do you even know Jesus Christ?”

Jesus is the person who, when you meet him, brings you home. He’s the person who tells us, “You are not alone.” People are isolated. Whether they’re on the street or in a Wall Street banking office, people are crying out for a home, aren’t they?

Lopez: Yes, frequently the person in need of God’s love is the person next to you or even the person you’re married to. Pope Benedict said that after a meeting on the Americas that I attended.

I was shocked by his question because I didn’t expect to be rebuked by the pope. At the time, a lot of people were talking about New Evangelization projects, and so was I. And the pope said that all that stuff is worthless if you’re not praying constantly and having that encounter with Christ.

Christ is real, yet there is a real danger, especially if you work in the Church, or do something Catholic, to become someone who talks about the Church and the faith without really keeping your eyes on the cross. That was striking to me, when I really started to read the mystics in a more serious way, how many of them literally gaze on the cross.

I try to make sure I always have a cross somewhere near me, because it keeps me focused. You don’t need to physically have a cross. You can meditate on the cross in your mind, but it doesn’t hurt.

McGregor: No, that is the thing we need. We have senses and one of them is touch. Sometimes we have to grasp something, we have to hold on to something. That’s partly why your book is so nice, because it’s such a beautiful book to hold. It’s a leather-bound journal, but not of empty pages. It’s a journal of the heart, isn’t it?

Lopez: Oh, absolutely. Sometimes we think of saints as legends, as too good to be true. But when you actually read them, you discover that they’re journaling their heart, the fruit of their prayers, and you realize, “Oh, they’re not that different from me. I can do this, too.”

Saint of the day: Evodius of Antioch

The origin of our conflicts and differences