Tracing the path from St. Nicholas of Myra to Santa Claus

We all know the beloved Coca-Cola Santa Claus: the rosy cheeks, the twinkling eyes, the plump stomach. But where did we get this figure of gift-giving and holiday cheer?

In “The Saint Who Would Be Santa Claus: The True Life and Trials of Nicholas of Myra,” (Baylor University Press, $16), Adam C. English dives into the stories of the true Santa, separating fact from fiction to give us the saint whose generosity and Christian virtue has inspired a worldwide tradition.

Kris McGregor: Where would we find the original St. Nicholas?

Adam English: St. Nicholas of Myra was born in the late 3rd century on what is now the southern coast of Turkey. Christianity was a persecuted minority religion when he was born, but when he died, around the year 335, Christianity was not only legalized, but it was the favored faith of the empire. He witnessed this huge transformation.

McGregor: How did you find St. Nicholas in authentic history?

English: I spent some time in Mari, Italy, which has an archive library where all these Greek and Latin documents are housed. I found evidence in all sorts of scattered documents for the existence of St. Nicholas, but what’s more important is that I was able to separate this St. Nicholas from another Nicholas.

Through the ages, their stories have been blurred and merged together, so when you hear popular accounts of the life of St. Nicholas, it’s typically the story of these two men.

English: Nicholas means “the victory of the people,” “the people’s victor.” In the name itself, there’s hope and promise, and he really lived out that kind of life. We think of him connected with gift-giving and generosity, but he was more than that. Nicholas was a businessman, a patron of the people.

He acted as lawyer, judge, arbitrator, a civil servant for the people, in addition to being a wonderful Christian pastor and bishop.

Icon of St. Nicholas by Jaroslav Čermák, showing him with a halo, dressed in clerical garb, and holding a book of the Scriptures in his left hand while making the hand gesture for the sign of the cross with his right. (Wikimedia Commons)

McGregor: How did we get from St. Nicholas to Santa Claus?

English: It really goes back to the early 19th-century New York. Around that time there are a number of influential men connected with the New York Historical Society who are trying to establish new traditions and reconnect with their Dutch heritage.

Part of what it meant to be Dutch was to have Sinterklaas, or St. Nicholas, traditions. If you gave St. Nicholas gifts, or baked St. Nicholas cookies, you were celebrating your Dutch traditions. When this catches on, there’s this whole movement toward creating these new, richly European traditions with St. Nicholas.

Ultimately, as these traditions start to morph and change, the idea of Santa Claus became the creation of the pictures of Thomas Nast, Norman Rockwell, and Haddon Sundblom — all people who were trying to depict a saint who is warm, friendly, and lovable.

McGregor: What do you think St. Nicholas would have to say about Santa Claus, and our veneration of him, as we now have Santa as such an integral part of our Christian holy day?

English: My parents definitely struggled with the interaction between Santa Claus and Christmas.

They wanted us to remember that Jesus is the reason for the season, and at the same time, they wanted us to enjoy finding presents under the tree on Christmas morning, and hearing “The Night Before Christmas.”

I think this is where St. Nicholas can be of such value, because we don’t have to say no to Santa Claus. We can say yes to St, Nicholas. Here’s a man who is a model of gift-giving, but also of Christian virtue. Instead of kicking Santa Claus out of the house, we can invite St. Nicholas in. 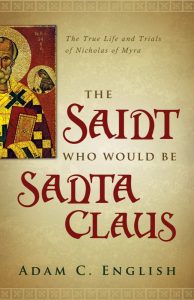 The stories of St. Nicholas’ generosity were shocking even in their own day. They’re still inspiring to us today, but in a time when people lived scarce lives, and they went day-to-day wondering where their next meal might come from, here’s the story of St. Nicholas, who is providing for their needs and looking out for them.

They’re ordinary people who have no other champion but St. Nicholas.

Even by the early 1100s in France, you have nuns making little toys and leaving them on the doorsteps of children, and signing them “from St. Nicholas.” Anyone can do this. His actions are inspiring in that sort of ordinary way.