You’ve seen us at Mass: women or men who are married to non-Catholics. We’re often at church on our own without our spouses. We appear to be alone, though many of us feel our commitment to Catholicism is supported by our non-Catholic spouses.

At 17, I fell in love with my husband, Robert, during a one-week school trip to Washington, D.C. I was there with a small group of my fellow students from Mayfield Senior School, a Catholic girls’ high school in Pasadena, but the workshop drew students from around the country.

He was there on scholarship from Ohio, and I’d never met anyone so intelligent and well-spoken. Well before the internet, he was able to cite voting records and ask informed questions to senators, Supreme Court justices, and ambassadors. More than that, his sense of humor and offbeat personality engaged me. I liked who I was when I was with him, as he brought out the best in me. 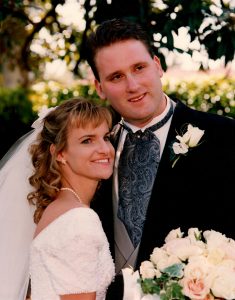 Jenny and Robert Patton on their wedding day. (Submitted photo)

Our courtship occurred through letters, long-distance phone calls, and many flights. Prior to dating him, I had gone to dances with Catholic boys from Loyola and St. Francis. Robert had been baptized in the Presbyterian church, but, with his family’s many moves across the country, he attended a patchwork of churches throughout his youth, none of them Catholic.

After five years of dating, he proposed marriage, something he’d talked about since the first month we met. Though he wasn’t Catholic, he agreed to attend pre-Cana classes together, and he supported my wish to raise our children as Catholics.

Though I’d always considered myself religious — which, to me back then, meant going to church, saying grace before meals, and going to confession — Robert has helped me understand how faith elevates my religious practices.

He prays every night before falling asleep, thanking God for our blessings. When I was pregnant with each of our sons, each night he placed his hand on my belly and said, “God, may this child get the best of both of us and bring out the best in both of us.”

Through our trials — a child diagnosed on the autism spectrum, my chronic illness, our parents’ bouts with cancer — his faith has always strengthened mine. With God’s support, he knew we would get through our challenges, and we have, growing stronger along the journey.

When I’ve been low, he has encouraged me to attend Mass more often. He takes the call to donating his time and talent seriously, and has made cookies to support our parish’s Kairos prison ministry, a way to show inmates that people on the outside see them through the eyes of “agape” love and are praying for them.

He attends Mass in our home church a few times a year, but actively seeks out Catholic services when we’re on the road, such as at the Hofburg Palace on Christmas Day, a magical experience thanks to the angelic voices of the Vienna Boys Choir. 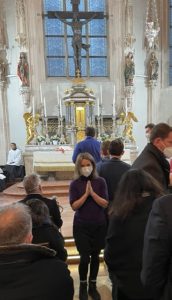 The author at Mass during a recent visit to Vienna's Hofburg Palace. (Submitted photo)

While I often sit alone in the pews, I am not alone.

Nan Okum, an extraordinary minister of holy Communion, former CCD teacher, and active member of St. Therese Church in Alhambra, has long been married to Ron — who was raised in the Jewish faith and who is “very proud of being Jewish.”

Even though Nan knew early on that Ron was the love of her life, she wasn’t sure she could marry him. She made it clear to him how important it was to her for her children to be raised Catholic. Fortunately, he fully supported her commitment to her faith — then and now. Their daughters Erin and Amy and their six grandchildren were all raised in the Church.

To Nan’s surprise, it was Ron who recently asked their 25-year-old grandson if he was still going to Mass regularly. She appreciated this gentle nudge that showed his understanding of how important her faith is to her.

Santa Clarita resident Phil Phethean said he married his non-Catholic wife, Barbara, “because she lives life as a good person” and supports everything he does as a Catholic. He appreciates that she joins him at functions and attends Mass sometimes with him at Saint Kateri Tekakwitha Church.

When Phil was diagnosed with a tumor, his wife shared his belief “in a divine intervention.”

“Catholic or not, if we live our lives as Jesus has asked us, we can only hope to do our best in the life he has given us,” Phil shared.

Mike Psomas, who spent some time away from Catholicism, has returned to it. He now “practices with purpose” and attends St. Brigid Church in the Pacific Beach area of San Diego. He said his wife, Sonia, who was raised Presbyterian, has “a heart full of hope and love.”

Still, it’s not always easy being married to a non-Catholic. “There are times when I see my friends volunteering or doing other Catholic things as a couple that I wish she was Catholic and would want to do those things with me,” Mike said.

Over time, Sonia has joined Mike in coming to the conclusion that life begins at conception. Recently she became “a little outspoken about it” with her friends. They brought up Mike’s faith, and she found herself in “the unusual position of defending the Catholic teaching on the matter.”

And when she told Mike about the episode, she was somewhat proud of herself. “I was silently thanking God that she was slowly, at her own pace, finding her way toward the truth I have been rediscovering.” 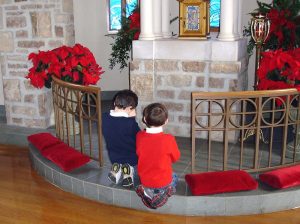 When you see people like Nan, Phil, Mike, and me at Mass on our own, they may also be married to a non-Catholic. Others may be single, widowed, or married to a nonpracticing Catholic.

Even if those singles you encounter are one of the lucky ones who feel their faith is supported at home, I encourage you to reach out and introduce yourself. Though attending Mass fuels us, the welcome of others is what truly makes us part of the community.

We sit by ourselves, but we are not alone.