The subtle yet disturbing message within “The Family”: Christianity is a problem

“Where does politics end and religion begin?”

It’s the question at the heart of Netflix’s trending original docuseries, “The Family.”

Directed by Jesse Moss, the five-part series is based on the book of the same name by Jeff Sharlet, who claims to give an insider’s account of a pseudo-Christian organization’s structure (or lack thereof) and mind-boggling influence on government leaders, both in the U.S. and abroad.

“The Family” includes an array of interviews with supporters and skeptics alike, but its overall theme is the suggestion that the group’s actions have flirted with the line separating church and state. Though intriguing and at times disturbing, ultimately the film raises more questions than answers and brings more confusion than clarity. 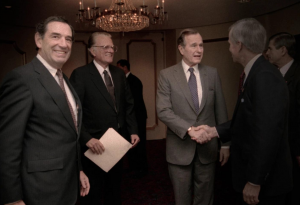 Jeff Sharlet in a scene from "The Family." (NETFLIX VIA IMDB)

It all starts with Sharlet’s experience at Ivanwald, a men’s residence in Arlington, Virginia, that his friend Luke invites him to. Who lives at the house? “We’re not Christians,” asserts Luke (portrayed through re-enactment and dramatized scenes). “We’re followers of Jesus. And we just serve … men who are chosen by God for leadership.”

Sharlet accompanies Luke to the house and finds a group of friendly, devout young men who live, eat, play football, and pray together. They refer to themselves and others at similar residences as “The Family.”

Before long, Sharlet notices high-profile politicians and leaders often visit their headquarters. Soon he discovers that the Family has connections with powerful people around the world — and he wants to find out why.

The documentary goes on to claim that the Family’s primarily goal is to influence people in power — whom they see as ordained by God to rule — to know Jesus. And because those people have been chosen, the goal also entails keeping those leaders in power — no matter what.

According to the documentary, the group has funded high-profile American politicians, sometimes with public money, to meet with foreign leaders and discuss Jesus with them, and it has helped politicians involved in sex scandals to remain in power without reprimand.

The main difficulty in telling this story is the lack of structure, theology, and unity within the family. Supporters claim that the group was founded in the 1930s by a Norwegian immigrant named Abraham Vereide, who sought to evangelize political leaders and established the local “prayer breakfasts” that became the foundation for the now decades-old National Prayer Breakfast.

There is some level of organization in the financial dimension (it is registered as a nonprofit organization), but what exactly does it mean to be a “Fellowship associate” or a “friend of the Family?” The series does little to offer an answer.

The Family’s longtime avoidance of publicity also poses a challenge. Although Vereide and his successor Douglas Coe were heavily involved in organizing the National Prayer Breakfast, the Fellowship Foundation is not officially associated with the event.

Coe’s role was also kept ambiguous. According to interviews in the film, he never wished to be seen as an official leader, but his meetings with dozens, if not hundreds, of public officials made him an influential spiritual mentor and authority for many. 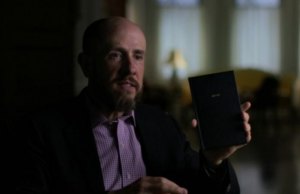 Douglas Coe (left) in a scene from "The Family." (NETFLIX VIA IMDB)

All of these are fascinating details, and the film’s greatest strength is that it presents them through dozens of interviews that give firsthand accounts. However, the “The Family” falls short in failing to assemble those details together into a coherent picture.

The nature of this religious group is ambiguous, but that ambiguity leaves room for thrown-together conclusions — a temptation that “The Family” does not entirely avoid.

As the episodes progress, the implication grows stronger that the suspect operation is not so much this particular group, but rather the “influence” that the “religious right” has had on government here and oversees.

Campaigns against gay marriage in foreign countries are scrutinized not just because of the Family’s potential association with them, but because they themselves, according to the film, are bigoted campaigns.

The only footage shown of such campaigns shows people who say they hate homosexuals or want to kill them — as if they are the sole face of the pro-traditional marriage constituency.

On top of that, the March for Life is painted as a purely religious movement that has nothing to do with civil or legal matters, so the fact that Mike Pence spoke at the 2019 rally makes him a state leader entangled with religion.

Such portrayals suggest that any nod to faith, faith-based, or “traditional” values is a blow against the sacred wall between church and state. And that’s where “The Family” takes things too far.

By associating together an amorphous, pseudo-Christian group with other Christians without drawing distinctions, the film both obscures the identity of the Family and does a disservice to religious conservatives who have nothing to do with money laundering, illegal lobbying, or attempts to keep “chosen” leaders in power.

It is perfectly possible — even probable — that some leaders use Christian messages and connections to increase their popularity and security in office. But it’s also possible, and probable, that many others genuinely want to exercise a noble leadership, guided by Christian values.

The film has a well-balanced set of interviews both for and against the Family, including Christian leaders who find in it a skewed view of Christ and leadership.

However, “The Family” could have shown examples (or at least entertained the possibility) of leaders whose faith informs their leadership in an appropriate way. But instead, we’re only left with the bleak observation from one interviewee: “Jesus and Capitol Hill don’t mix.”

Finally, the documentary fails to examine the Christian principles that were part of the America’s founding. It only asserts that church and state were always meant to be separate. But it is no secret that the Founding Fathers were Christian believers, put the name of God in the Declaration of Independence, and envisioned this country as having a divine mission.

That historical fact continues to inform the sense of American identity for many citizens and political leaders alike — but does it amount to the “enmeshment of church and state”?

Just as sinister as the using of the name of Jesus and Christianity to seize and maintain power is the implication that all expressions of faith in the public square are conspiratorial attempts to dominate others.

Faith and reason together have the capacity to save society. “The Family” does an important service by spotlighting those who have misused faith and Christianity — but it betrays an anti-Christian agenda by leaving the viewer with the message that Christianity itself, rather than the distortion of it, is the enemy.