In Baltimore, subtle signs of a change of era for U.S. bishops

At the start of the U.S. Conference of Catholic Bishops’ annual meeting, Pope Francis’ ambassador invited reflection on the state of the Church: “Where are we?” Archbishop Christophe Pierre asked in his address to the gathered bishops. “Where are we going?”

To the first question, the bishops seemed to answer that they consider this a time to focus on internal matters related to governance and unity among themselves. While the meeting touched on a range of wider cultural and political issues, their public agenda was largely dominated by in-house concerns such as the translations of prayer books, budgets and plans for pastoral initiatives, and the consideration of candidates for sainthood.

The most closely watched indicator of future direction (“Where are we going?”) was the bishops’ election of 70-year-old conference secretary Archbishop Timothy Broglio to a three-year term as conference president. The Ohio native is a former Vatican diplomat who has spent the last 15 years leading the U.S. Archdiocese for Military Services.

For the second straight election, the bishops decided to elect a vice president who was too close to the mandatory retirement age of 75, ensuring that their pick would not be qualified to assume the president’s seat in three years.

In recent decades, the conference has elected vice presidents to the presidency, with few exceptions. This year was one of them due to the fact that in 2019, the bishops chose Archbishop Allen Vigneron of Detroit, then 71, who was similarly ineligible to be elected president this time around. 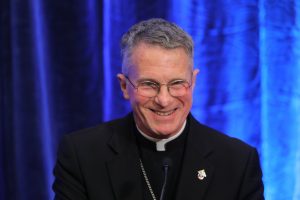 Archbishop Timothy P. Broglio of the U.S. Archdiocese for the Military Services, smiles during a Nov. 15, 2022, news conference after being elected president of the U.S. Conference of Catholic Bishops during the fall general assembly of the bishops in Baltimore. (CNS photo/Bob Roller)

Several bishops told Angelus that Archbishop Lori’s age was a factor in the vote, suggesting his vice presidency was a deliberate decision on the body’s part to avoid committing to any one leader beyond the next three years.

“Why do we have to decide that now?” one bishop remarked privately.

A few others, like Bishop Michael Sis of San Angelo, suggested that succession planning was the furthest thing from the bishops’ minds.

“We don’t really care about that,” Bishop Sis told Angelus in an interview. “There is sufficient continuity already through [the conference’s] staff and committee chairs.”

Whatever the collective thinking was, there were other subtle indicators of a change of era for the conference.

Inside the meeting floor, long, classroom-style rows of tables were replaced by round ones to encourage what the conference called “fraternal dialogues.” A greater portion of the assembly was spent behind closed doors in “executive session” than in past years, out of the eyes of guests and members of the media.

The changes were largely well-received among the bishops and seen as reflective of a style more in tune with the ongoing Synod on Synodality and Pope Francis’ push for what he calls a more “listening” Church.

For Catholic media in attendance, this year’s meeting was the last to be covered by the bishops’ news agency Catholic News Service (CNS), which in May announced it would cease U.S. operations at the end of the year.

A new agency, run by Indiana-based Catholic publisher Our Sunday Visitor, will launch in January, aiming to fill a similar role. But the signs of a shrinking market for Catholic media are hard to ignore. Since CNS’ announcement, several bishops have declared that they will be closing their news publications, notable being Catholic New York, the largest diocesan newspaper, which delivered its final issue the same week as the bishops’ meeting. 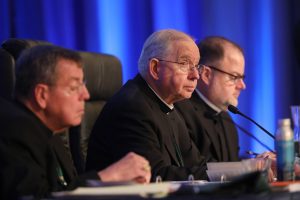 Outgoing conference president Archbishop José H. Gomez also sounded the note of change. In his final address to his brother bishops, he recalled a now famous line by Pope Francis: “Ours is not an age of change, but a change of age.”

“Our society has moved hard and fast toward an uncompromising secularism; traditional norms and values are being tested like never before,” the archbishop said.

Saying that “the trials of this age are spiritual,” Archbishop Gomez called for new efforts to “open every door for Jesus Christ, to shine his light into every area of our culture and society.” He also urged “a bold pastoral strategy to communicate the Gospel, to use every media platform to turn hearts and minds toward Christ, to call our people to be great saints.”

Incoming president Archbishop Broglio told the press he planned to continue “the good example” of leadership set by his predecessor. He brushed aside questions raised about his own record, specifically his time spent working for late Vatican Secretary of State Cardinal Angelo Sodano, who has been accused of covering up the sexual abuses of the now disgraced late Father Marcial Maciel Degollado, founder of the Legionaries of Christ.

“Hindsight is always 20/20,” said Archbishop Broglio, who suggested that his office weren’t the only ones misled by the Mexican priest. “Many things that we’ve learned now certainly weren’t known then.”

The Baltimore gathering marked the bishops’ first time together since the U.S. Supreme Court’s reversal of Roe v. Wade, a result that they’d spent years leading American Catholics in praying for. But the U.S. midterm elections held a week earlier — in which pro-choice advocates claimed victory on five abortion-related state ballot measures — indicated to some bishops that there is much work to do to build a cultural consensus to restrict abortions. 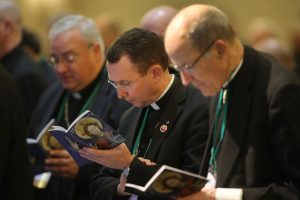 Bishop Andrew H. Cozzens of Crookston, Minn., center, and other bishops pray during a Nov. 16, 2022, session of the fall general assembly of the U.S. Conference of Catholic Bishops in Baltimore. (CNS photo/Bob Roller)

The bishops also acknowledged tensions with President Joe Biden, the nation’s first Catholic president in six decades. In remarks to the media after his election, Archbishop Broglio expressed openness to meeting with President Biden: “If he wants to meet with me, I’ll be happy to meet with him.”

If abortion emerged as the most substantive “where we’re at” issue discussed at the meeting, the bishops’ hopes for the Church’s future direction seemed tied to their National Eucharistic Revival initiative and the Synod on Synodality.

The price tag of the revival’s final event, a three-day national eucharistic congress in Indianapolis the summer of 2024, was reduced in half from $28 million to $14 million because of donor support and fundraising, announced Bishop Andrew H. Cozzens of Crookston, Minnesota, who leads the USCCB committee spearheading the revival. The congress will be promoting pilgrimages to Indianapolis from four sites in the United States, Bishop Cozzens said.

The bishops were also updated on the progress of the ongoing Synod on Synodality. After more than 30,000 listening sessions around the U.S., the process now heads to its “continental phase” of consultations, made up of 10 Zoom meetings involving synod delegates from the U.S. and Canada.

"While admitting the process was not perfect, we have learned much and can do better in the future,” said Bishop Daniel E. Flores of Brownsville, Texas, who gave a report to the bishops on the process so far.

In his address to the bishops, Archbishop Pierre praised both initiatives as opportunities for evangelization. He said the new continental phase of the synod “demands discernment” but acknowledged that “finally, the Church in the United States is beginning to think and live in a synodal way.”

Acknowledging the challenges and uncertainties faced by the global Church and the bishops in their own dioceses, the nuncio warned them not to get “locked into ‘crisis thinking’ and ‘crisis talk.’ ”

“If one looks at history, in God's provident design, the Church constantly lives through and emerges from such experiences of anguish,” he reminded them. “Moments of crisis can permit us to discern the presence of the Lord and to refocus on the mission and on where we are going together.”