The irony of the canceling of Flannery O’Connor

A Jesuit university recently decided to rename a dormitory that had been named for Flannery O’Connor, arguably one of this country’s most remarkable Catholic writers. Though she died at 39 in 1964, she produced a body of work that made her, according to the Library of America, “one of the most distinctive American writers of the twentieth century.”

The decision to be rid of her name by a Catholic college has sparked a protest letter signed by more than 80 literati, including the well-known African American author Alice Walker (“The Color Purple”), California’s own Richard Rodriguez, prize-winning writer Mary Gordon, and Auxiliary Bishop Robert Barron of Los Angeles.

The president of Loyola University of Maryland, Father Brian F. Linnane, SJ, announced the decision after an online petition calling for the renaming garnered 1,000 signatures. The reason for the petition was that O’Connor had used racist language in private writing, some of which dated back to her teenage days.

Father Linnane announced, “We were looking to name the building” for someone whose “commitment to the fight of racial equality — from an intellectual point of view and from a faith perspective — would be more appropriate.” This despite the fact that he also said that in O’Connor’s fiction, “the dignity of African American persons and their worth is consistently upheld, with the bigots being the object of ridicule.”

This does not read as a profile in courage, despite Father Linnane’s contradictory hope that the writer will still be assigned reading for students. Orwell would identify this as an example of what he called a non-Euclidean universe, where two opposing notions can occupy the same space.

O’Connor was born and raised in Georgia and was a woman of her time and environment. When asked if James Baldwin could meet with her in Georgia, she wrote a friend: “No, I can’t see James Baldwin in Georgia. It would cause the greatest trouble and disturbance and disunion. In New York it would be nice to meet him; here it would not. I observe the traditions of the society I feed on — it’s only fair.”

It was in spite of her background that Flannery O’Connor was able to identify “America’s original sin of racism,” said Angela Alaimo O’Donnell, a professor at Fordham University, who spearheaded the protest against the renaming. O’Donnell’s major study of the author’s work, “Radical Ambivalence: Race in Flannery O’Connor,” was published this year.

My only consolation amid the uproar came from a priest friend who offered this curmudgeonly observation: “Flannery O’Connor is probably relieved not to be associated with an institution of ‘higher’ learning so ambivalent about a Catholic intellectual of such integrity.”

He reminded me that O’Connor had once been a visiting artist at a dorm of the University of Chicago. She wrote to a friend about that experience:

“Last month I went to the University of Chicago to ‘assist’ at two writing classes and give a public reading and live in the dormitory for five days. Some old lady left them money to have a woman-writer or some other female character live in the dormitory a week and be asked questions. The last one they had was a sculptor and she brought a piece of marble and hacked at it for them and this was apparently most entertaining, but I was less of a success. The girls were mostly freshmen and sophomores and their questions gave out long before my patience. The low point was reached when — after a good ten minute silence — one little girl said, ‘Miss O’Connor, what are the Christmas customs in Georgia?’ I was mighty glad to leave after five days.” 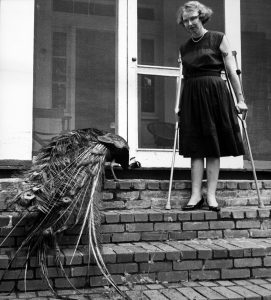 Miss O’Connor did not have a great deal of patience with students, nor did she have a false esteem for university education, even in her own time. When some college professors assigned an essay on one of her short stories and sent them to her, she responded: “The interpretation of your ninety students and three teachers is fantastic and about as far from my intentions as it could get to be.”

She recounted other lecture experiences, which included reading her stories, and remarked that students probably enjoyed them only because of her deep Georgia accent. To one correspondent she said that even if she had said the opposite of what she meant, the response by the college listeners would have been the same.

Consider her response to a student who wrote to her about his doubts about God:

“Even in the life of a Christian, faith rises and falls like the tides of an invisible sea. It’s there, even when he can’t see it or feel it, if he wants it to be there. You realize, I think, that it is more valuable, more mysterious, altogether more immense than anything you can learn or decide upon in college (emphasis added).”

O’Connor was a woman well-connected in the literary avant garde of her time. She was a friend of poets and writers and read theologians like Romano Guardini and Teilhard de Chardin. Her appreciation of the latter led her to entitle one of her most famous short stories, “Everything That Rises Must Converge.” Her spiritual director for many years was Father James H. McCown, SJ, a man who surprised the author by a visit to her Georgia farm. He said of her, “How such sophistication could coexist with such innocence and delicacy of conscience is still a marvel to me.”

I am sure O’Connor would be able to laugh off the political correctness of her “canceling.” Her writing has many examples of heavily ironic humor. She once recounted a hospital clerk’s intake interview of her when the woman asked her if she worked. “Self-employed” she answered. “What bidness?” she was asked. “Writer,” she replied. “How do you spell that?” asked the woman.

She met a great deal of miscomprehension in her life, so she was no stranger to rejection. Her view of the average Catholic reader was that he was more Manichean than Catholic, and so wanted literature to be “sentimental.” That sentimentality violated the truth of the redemption, she thought, and so she aimed at “an early arrival at a mock state of innocence, which strongly suggests its opposite.”

Ditto for Loyola’s renaming of its dorm.

Fundamentalists suspected in vandalism of Catholic church in Brazil