“I just can’t remember one quite like this,” says the occult detective Ed Warren in “The Conjuring 3.”

The rest of us can, or we will, if we just wait a minute — because shortly after Ed speaks these words in the movie’s opening segment, a shadowy figure steps out of a taxicab. Wearing a hat and holding a briefcase, he gazes up at a lighted window in the darkness. The scene is an homage to a lookalike moment in “The Exorcist,” when Father Merrin, the priest played by Max von Sydow, arrives at the townhouse where he will battle a demon who possesses a child.

Many viewers will be on familiar ground even if they haven’t seen that 1973 horror-movie classic. Two previous installments of “The Conjuring” series, featuring the Catholic paranormal investigators Ed and Lorraine Warren (played by Patrick Wilson and Vera Farmiga), reached theaters in 2013 and 2016.

Five spinoffs also have hit the silver screen, as part of what fans sometimes call “The Conjuring Universe.” In worldwide box-office revenue, these eight movies so far have raked in around $2 billion — and even as their quality has varied, they’ve allowed Hollywood to show a surprising reverence for the idea of spiritual warfare.

“The Conjuring 3” begins with a botched exorcism, as the Warrens seek to document the efforts of Father Gordon (Steve Coulter), who tries to expel a demon from an 8-year-old boy, David Glatzel (Julian Hilliard). Under the skillful direction of Michael Chaves, this initial sequence is the movie’s most harrowing moment, even as it relies on the usual theatrics of flying objects, glowing eyes, and impossible body contortions.

Amid the chaos, members of the Glatzel family start to despair. Arne Johnson (Ruairi O’Connor), the boyfriend of David’s older sister (Sarah Catherine Hook), invites the unclean spirit to depart from David and to possess him instead. This is an amazing sacrifice as well as an offer the demon apparently can’t refuse, and the rest of the movie involves the murder and mayhem that follows from this supernatural transfer.

It’s a tale of curses, witch totems, leatherbound books in Latin, black-sabbath ceremonies, and a creepy Satanist who bears an uncanny resemblance to Mrs. Danvers, the villain played by Judith Anderson in “Rebecca,” the 1940 film by Alfred Hitchcock.

Like its two tentpole predecessors, “The Conjuring 3” claims to be “based on the true story” — in this instance, a 1981 court case in Connecticut in which the real-life Warrens worked with Arne and his contention that he was not guilty of murder by reason of deviltry.

In legal lore, it’s sometimes called the “Devil Made Me Do It” case, and this nickname provides the subtitle of “The Conjuring 3,” which nevertheless takes major liberties with actual events. This is not a true-crime documentary, but a horror flick that aims to provide frightful entertainment.

Nor is it a work of theology, and it doesn’t approach its subject with the seriousness of “The Exorcist,” which was based on the 1971 novel by William Peter Blatty, who viewed his religious thriller as an expression of Catholic belief. The book and the screenplay, for which Blatty won an Academy Award, have their notorious aspects, including depictions of blasphemy. Despite their fame, they aren’t for everyone.

Reasonable people differ on whether they do more harm than good. They are, however, honest efforts to consider the threat of possession, the nature of evil, the problem of doubt, the importance of hope, and the soul-saving mission of the Catholic Church.

Although “The Conjuring 3” lacks the depth of “The Exorcist,” it shares an appreciation for faith as an aid to the troubled. As they go about their adventures, the Warrens and their spiritual allies make the sign of the cross, sprinkle holy water, and clutch rosaries, always with devotion. Moviegoers will hear Psalm 23 (“The lord is my shepherd”), Psalm 24 (“Who shall ascend the hill of the lord?”), and Ephesians 6:11 (“Put on the full armor of God”), uttered with piety.

“The Conjuring 3” also understands a point that C.S. Lewis made in the preface to “The Screwtape Letters,” his epistolary novel on the behavior of demons: “There are two equal and opposite errors into which our race can fall about the devils. One is to disbelieve in their existence. The other is to believe, and to feel an excessive and unhealthy interest in them.” 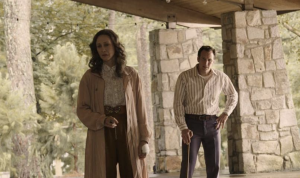 Vera Farmiga and Patrick Wilson in "The Conjuring: The Devil Made Me Do It." | IMDB/WARNER BROS.

The Warrens are true believers who both confront and cooperate with secular disbelievers. “Ed and I have proven the existence of the demonic hundreds of times,” says Lorraine, as she discusses Arne’s predicament with a lawyer. “You’ve proven it to the Church,” replies the lawyer. “This is a court of law. The standards of evidence are completely different.”

Then Ed jumps in: “The court accepts the existence of God every time a witness swears to tell the truth. I think it’s about time they accept the existence of the devil.” Later, the Warrens talk to a skeptical cop. “I’m only interested in leads that are grounded in reality,” he says. “Good,” replies Ed. “So are we.”

But do the Warrens — and the entire enterprise of “The Conjuring” — move too far in the other direction, toward credulity and attraction? Do they display an excessive and unhealthy interest in hell’s legions?

The movie certainly recognizes fiendish trickery: With humor and subtlety, it turns “Baby Hold On” and “Call Me,” the rock songs by Eddie Money and Blondie, into anthems of possession and summoning. It also knows the seductive power of evil. In a revelatory scene, a character describes how the study of the occult can become a source of human wickedness and then confesses, “I created a fascination.”

While the movie’s tribute to “The Exorcist” is a fitting hat-tip to horror-movie tradition, the other recyclings of “The Conjuring 3” are less compelling. They include an obligatory levitation, creaky wooden steps that descend into spooky basements, and the flabbergasting refusal of otherwise smart characters in poorly lit rooms to reach for light switches.

At the climax, when life and death hang in the balance, Lorraine pulls out a platitude: “She thinks our love is our weakness, but it’s not.” Pause. “It’s our strength.”

Go ahead and roll your eyes. There may not be a bigger cliché in the whole movie. But that doesn’t make it wrong.