To Catholics, the Virgin Mary has long been, among other things, the mother of God, the ultimate model of faith, and our most powerful intercessor.

At the same time, she was also a simple woman, a human being who suffered like us, both physically and spiritually. She experienced poverty, precariousness, and loss, so it’s no surprise her everyday life as a spouse and mother has fascinated Christians from the beginning.

The new “Visualizing the Virgin Mary” exhibit at the Getty Center Museum brings that religious fascination to a secular space, aiming to capture the ways Christians have imagined the everyday life of Mary and her intervention in their own lives.

This is a small exhibit, less impressive than the previous ones drawn from the Getty’s manuscript collection. The bulk of the exhibit is made up of illuminated manuscripts from Europe, dating from the Middle Ages to the early Renaissance.

The exhibition is divided into three parts. The first part, “Mary beyond the Bible,” looks at how artists imagined events in the life of Mary that are not narrated (or if so, only briefly) in the Bible. The second part, “Miraculous Mary,” looks at the cult of Mary and her role as healer and performer of miracles. The last part, titled “Mary in the Americas,” explores the legacy of Marian imagery in the Americas, especially the virgin of Guadalupe.

Ancient religions were full of goddesses and demi-goddesses, women of extraordinary beauty and wisdom who were the object of cult and meddled in the life of humans. They were cold, majestic, and distant, unable to fully sympathize with mortals, having never felt pain, sorrow, or hunger.

The Virgin Mary is different. She is the object of cult, but she is fully human. She was the mother of God, but she lived an ordinary life.

This distinction comes across clearly in the first “Mary beyond the Bible” section of the exhibit, which includes a 15th-century illuminated manuscript from Paris depicting Mary reading a book to a toddler Jesus while he rides a hobby horse. 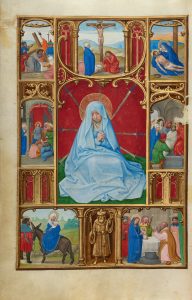 The exhibit’s most striking, beautiful image is from a Renaissance manuscript in Bruges portraying the Virgin Mary surrounded by seven spears representing the Seven Sorrows of the Virgin Mary, which are depicted separately in rectangular spaces on the page margins.

The artwork conveyed how the prophecy of Simeon from the Gospel of Luke (“And a sword will pierce your soul too”) did not only concern the passion of Jesus: the whole life of Mary was marked by the cross. In the lower left corner, she makes her way to Bethlehem on a donkey, a prelude to Jesus’ birth in utter poverty and precariousness. At the bottom right Mary receives Simeon’s ominous prophecy.

Mary’s humanity — seen in her closeness to those who invoke her — is also crucial to the cult of Mary as miracle worker. Several illuminations focus on Mary’s miraculous interventions: her portrait comes to life in response to the prayer of a woman in a manuscript miniature, or she miraculously brings Communion to the imprisoned St. Avia in a 14th-century French illumination.

What makes the Virgin Mary so unique and so important is, in other words, the mystery of incarnation, which ancient pagan writers found impossible to understand: that the infinite, God, became finite, taking our flesh, in all its weakness, so that ours could also enter eternity.

In the words of Pope Francis, Mary “is the first creature who, with her whole self, body, and soul, victoriously crosses the finish line of heaven.”

Later in the exhibit, a 16th-century miniature from an Armenian manuscript places her at the scene of Jesus’ ascension into heaven (a detail not recorded in the Gospels), standing at the center of the picture surrounded by the apostles, looking up at her son already in heaven. The work suggests that she will follow him as he enters divine life.

Another miniature portrays the scene of Mary’s death and assumption: the dying Virgin Mary is on a bed, surrounded by the apostles, and her soul, depicted as a little baby, is already in her child’s hands. The mother of God is also his daughter, being born again to eternal life.

There’s also a 13th-century German manuscript showing Mary during the annunciation as she believes the words of the angels and the Holy Spirit, depicted as a little dove issuing from the mouth of Gabriel, comes to reside in her. The scene recalls St. Ambrose’s famous exhortation on the episode: “You too, my people, are blessed, you who have heard and who believe. Every soul that believes — that soul both conceives and gives birth to the word of God and recognizes his works.”

This small collection is a reminder of the most important thing we share in common with the Virgin: Just as Mary received this announcement from an archangel, we, too, receive life-changing news every time we hear the Gospel announced by another Christian.

As a result, Mary believed and a new, divine life was generated in her. Likewise, our faith promises that a new creature is generated in those who receive the good news and believe it, one with the same spirit of Jesus: a person who is able to love, to forgive, and to give his life for others.

As so many Christian artists throughout the centuries have understood, this new life reaches its fullness in heaven, thanks to the path opened by Christ and followed by his mother.

“Visualizing the Virgin Mary” went on view at the Getty Center Museum Oct. 11 and is open through Jan. 8, 2023.

Saint of the day: Paul Miki and companions