In the days following the Dec. 31, 2022, death of Pope Emeritus Benedict XVI, his enduring legacy as a theologian and scholar has been remembered throughout the world. And it’s that legacy that world-renowned portrait artist, Igor Babailov, proclaimed maestro by many, sought to capture in the late pope’s official portrait: “The Truth, The Way, and the Life.”

A fine art giclee of the portrait, which Babailov presented to the late Bishop David Choby, was positioned on the altar of the Cathedral of the Incarnation in Nashville, Tennessee, when Bishop J. Mark Spalding celebrated a memorial Mass in honor of Pope Benedict on Thursday, Jan. 5, the day of the late pope's funeral.

“It was a great honor when I saw that it was featured in the Mass,” Babailov told The Tennessee Register, the newspaper of the Diocese of Nashville. “It was the highest compliment to me as an artist that my portrait was chosen.”

Babailov began painting portraits at the age of 4, beginning his formal education of his craft at the age of nine. At 13, he was selected in a nationwide competition to study at a specialized fine art school for gifted children in Moscow. He graduated with honors and subsequently obtained the highest level of fine art education, eventually receiving his Master of Fine Arts degree, the equivalent to a Ph.D. in the United States, from the Russian Academy of Arts.

Upon completing his education in 1990, he came to the United States where he has since continued to establish himself as a renowned artist, scholar and author, sharing his knowledge and expertise with various audiences in America and abroad through master classes and lectures.

“I’m Russian by birth and American by choice,” he said.

Babailov is on the board of the American Academy of Catholic Scholars and Artists, is a distinguished fellow at The Catholic University of America in Washington, has an honorary doctorate from Cumberland University in Lebanon, Tennessee, and is a recipient of numerous awards and honors, including being knighted with The Order of St. Anne. Most recently, he was chosen as the 2022 recipient of the Ellis Island Medal of Honor.

The process of painting a pope

Babailov was commissioned to paint a portrait of Pope Benedict in 2006, a year into the late pope's papacy. It would be the second time he received such a request, having also painted the official portrait of Pope St. John Paul II, entitled “Be Not Afraid. Believe,” in 2003.

But before he could put brush to canvas, several steps had to be taken. First, to prepare, during an audience with Pope Benedict, he sketched the Holy Father, doing all he could to capture his likeness, character and personality.

“I like to work from life a lot but of course when I do commission works, I have to use photographs as references quite often,” he said. “But even when I use photographs as references, I apply my skill of working from life to make the portraits look lifelike. The uniqueness of my established portrait procedure is drawing sketches from life, in the tradition of the great portrait masters of the past.”

But capturing the human element to emulate wasn’t all that was required. Upon returning to his home studio in Brentwood, he had to find the right concept for the portrait, too.

“In every work of art, the most important part is to come up with the concept of the composition, so thinking is extremely important,” Babailov said.

First, in keeping with the idea of what he calls his legacy portraits, which feature figures such as popes, presidents, world leaders and others, “I have to present and show that it’s a portrait of the pope,” he explained. “I paint portraits of people from all walks of life. To me, when I represent someone on canvas, like in all my legacy portraits, you have to know immediately who it is when you see it. So people needed to be able to look at it and immediately say, ‘That’s the pope.’ Therefore, I’m thinking of certain compositions, certain attributes, a certain outfit.

“The fact that I met him, it greatly helped, too, and of course I researched and studied all about him.” 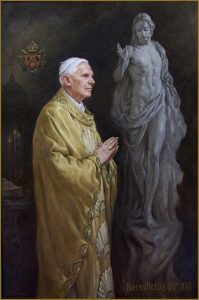 This official portrait of Pope Benedict XVI is by Igor Babailov, who was commissioned to paint it in 2006. He officially completed in 2007. (OSV News photo/courtesy Igor Babailov)

It’s about finding that element that makes each portrait unique, even when it’s a different person in the same role such as St. John Paul II or, later, Pope Francis, whom he was commissioned to paint a portrait of in 2015.

“Every pope is different like every person is different in this world,” Babailov explained. “Pope Benedict, one of the important things about him, we all know, is he was a theologian, a scholar, an educator, and I wanted somehow to portray that.”

With that in mind, “I was sitting here in the studio, asking myself, ‘What should the composition be?’”

The answer ended up being in front of him all along as he gazed upon a life-size portrait of the risen Christ that he’d painted just a few years earlier, entitled “Vita,” which in Latin means life.

“I was looking at that image, and I said to myself, ‘What if I incorporate that in the portrait?’” he recalled. From there everything fell into place.

“That figure of Jesus became the base for the whole composition, and, from that, I was able to choose the placement of Pope Benedict. I chose the angle and how to portray him,” Babailov explained. “It’s not a front view. It’s more like a profile, which is not very typical in portraits.

“Then, the choice to position the hands in prayer seemed right since Jesus is in the portrait, too,” he said. “It just started to come together like in a puzzle.”

The placement of the elements of the portrait causes “the viewer's eye to follow my thoughts,” Babailov said. “When the viewer looks at the portrait, immediately they look at the Holy Father’s face, and then the eye slides down the arm and into the hands folded in prayer that point to Jesus. From there one, we look at the silhouette of St. Peter’s Basilica where then our eyes go down to three candles, which represent the Trinity, and right below the candles sits the Bible. From there, it’s a nonstop movement.”

Babailov finally completed the portrait in 2007 and officially presented it to Pope Benedict during his visit to the United States in 2008. The portrait has hung in the Vatican ever since, with several fine art reproductions and giclees in collections around the world, most notably as part of the Vatican Splendors -- A Journey through Faith and Art Exhibition, an international museum tour, which opened in 2010.

The exhibit features more than 200 pieces of artwork, historic objects and cultural artifacts representing the 2,000-year history of the Catholic Church, including every pope since St. Peter. Among the artists featured are Michelangelo, Giotto, Guercino and Bernini. “The Truth, The Way, and the Life” represents Pope Benedict in the exhibit and was chosen by Pope Benedict himself.

“I was really honored to find out that my portrait took part in the Vatican Splendors exhibition,” Babailov said. “At the official opening, I approached the Vatican Curator and Michelangelo scholar, Msgr. Roberto Zagnoli, to thank him for selecting my portrait for this exhibition. He interrupted me saying, ‘No, no, no, Maestro, I did not select it. Papa did!’”

In all ways, much like Pope Benedict himself, Babailov said he hopes the portrait has a legacy of its own.

“These days, when people hear portrait, they immediately think of a photograph, but a portrait goes far beyond photography,” Babailov said. “It takes 450 years for oil paint to dry completely. … Because of the longevity of the painting, that already makes it a legacy work because it lasts for generations.

“You paint one portrait, and it’s always on the wall, and it passes from generation to generation, and there’s just something about that. When I’m signing my works, I know they’re going to pass on for generations, especially when you’re painting figures such as Pope Benedict XVI,” he added. “It’s the people whose names are in history, so you are attaching the image to the name. In this sense, I feel an incredible responsibility as an artist to portray the person accurately because it will be enjoyed and seen by future generations.”

“Even though St. John Paul II and Pope Benedict XVI are not with us anymore, their legacy is alive and will stand forever. Of course, to have met them is a great blessing, honor and privilege. When you’re in front of them, you feel like you’re off the ground and in a different dimension,” Babailov said. “It’s an incredible feeling. Having painted three popes in a lifetime, as I have, would be a tremendous honor for any artist, and it humbles me immensely.

“Pope Benedict XVI was very much loved and will be missed by many,” Babailov concluded. “Although every pope is an individual person and unique in their individuality, what unites them all is their holiness.”