New film ‘Minari’ is a deeply Christian reflection on failure

“If you took me to live in a place like that, I would leave you.”

Those were my wife’s words to me while watching the initial sequence of “Minari,” Lee Isaac Chung’s immigrant drama, which won multiple awards at last year’s Sundance Film Festival, and will be available on demand Feb. 26.

A family van moves through the lush scenery of the Ozarks only to stop in the middle of nowhere, in front of a mobile house surrounded by green fields. When wife and mother Monica (played by Yeri Han) gets out of the car, the look on her face is one of terror.

“What is this place?” she asks.

“Minari” tells the story of a young Korean couple who move with their two kids from California during the 1980s to rural Arkansas in search of a better and more independent life, a choice that generates tensions between husband and wife, which ultimately threaten to tear the family apart.

Monica is an overprotective mother, and not without good reason: their youngest son, David (played brilliantly by Alan Kim), suffers from a heart murmur. Jacob, her husband (played by Steven Yeun), has turned his business of planting Korean vegetables on American soil into a personal battle to show his children, and the world, that he can succeed at something.

His mentality is all in the brief exchanges with his son. He works in a hatchery separating female chicks from the males. When his child points at the smoke rising from a chimney in the hatchery, he explains that that is where the useless male chickens are discarded.

As the father of an immigrant family in the U.S., some of the moments in “Minari” felt familiar. The movie touches on many of the challenges, dilemmas, and sufferings that shape this most American of experiences.

Yet “Minari” also left me with an unexpected sense of hope. While not explicitly religious, the film is a masterful depiction of the invisible works of God, a reminder of a famous quote from St. John Henry Newman: “... it is the rule of Providence that we should succeed by failure.” 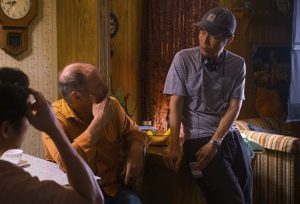 Writer and director Lee Isaac Chung (right) with Will Patton and Steven Yeun on the set of "Minari." (IMDB)

“Minari” is largely autobiographical. Once-struggling moviemaker Lee Isaac Chung (writer and director) found his inspiration in the works of early 20th-century writer Willa Cather, whose career turned around when she “ceased to admire and began to remember.”

Following her lead, Chung revisited his childhood memories of farm life in Arkansas, and the movie’s gorgeous cinematography is almost a perfect match for Cather’s inimitable descriptive prose.

Jacob’s only helper on the farm is an eccentric Pentecostal by the name of Paul, played by Will Patton. One day they meet him on their way to church, and the man is carrying a heavy wooden cross up the dirt road.

“This is my Church,” he explains.

It is a profound insight: the world is where we worship, our actions show who our god is. Jacob cares little for spirituality: his religion is succeeding at what he does, up to the point of becoming a curse. The property’s previous owner, we learn, killed himself after going bankrupt. As he tills the soil, Paul utters prayers to cast out demons. Is Jacob possessed by his dream of success?

Monica, on the other hand, forces her child to pray every night, telling him about children in Korea who saw heaven before bedtime and recovered from their sicknesses.

The unexpected turn in the story comes with the arrival from Korea of Soonja (Yuh-Jung Youn), Monica’s mother. 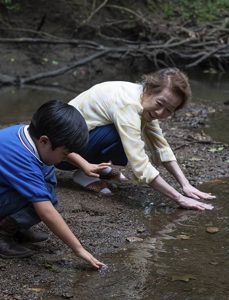 She embodies the typical hardened, working-class Korean woman shaped by a war that split her country in two, the opposite of the grandmotherly ideal.

“You do not look like a grandmother!” David keeps telling her.

After a series of initial skirmishes and comic misunderstandings, she forms a bond with little David. She is not one for coddling children and lets him run free and explore the countryside around the house, much to his mother’s worry.

Her presence increases the couple’s awareness of what they have given up.

“Whenever someone made your mom and dad sing, they’d get all lovey-dovey as they sang this song,” she tells the children at one point. Now they do not sing anymore, and their life is a constant, silent battle.

More importantly, through her careless and naive attitude, she sets in motion a series of events that offer the family healing when everything seems irreparable.

The movie takes its name from a hardy Korean herb that grows without effort and thrives by itself if planted in the right place.

On the contrary, Grandma Soonja seems to possess the wisdom of the Minari herb. The children begin to thrive, and heal, under her careless guidance. Her down-to-earth nature provides a corrective to both the secular worship of Jacob and the magical, mystical religiosity of his wife.

Narratives of the American dream are often characterized by the idea that effort, self-imposed moral discipline, and resilience eventually win the day. This is hardly a liberating narrative, especially for those who fail, and one that does not leave much space for the free work of grace.

“Minari” has a deeper wisdom to share, where salvation comes through the least expected people, through painful events that disrupt our plans, and through failure.

In her lack of planning and the chaos she leaves in her wake, Grandma Soonja represents the hand of god, that unforeseen live event that ends up being the means of salvation. “Minari” is a story of failure and rebirth, where rebirth is caused by someone other than us, someone who guides us not through moral precepts, but through real events and real people.

It is a rare moment of illumination when art can help us think about the invisible designs at work in the patterns of everyday life.