The lessons of Pope Francis' go-to novel in a pandemic

In his Sunday Angelus address during one of the most distressing weeks of the coronavirus (COVID-19) pandemic in Italy, Pope Francis on March 15 named a fictional character probably unfamiliar to most of his non-Italian listeners.

Speaking via livestream from the library of the Vatican’s Apostolic Palace, Pope Francis praised priests who, in the midst of the pandemic, find creative ways to be with their people. These are, he said, “priests with apostolic zeal who understand that in times of pandemic, you shouldn’t be Don Abbondio.”

In his Easter Vigil homily a month later, Pope Francis named the mysterious character again. Linking the Easter message of hope in the face of death with the word “courage,” often spoken by Jesus in the Gospels, the pope said, “If, on your journey, you feel weak and frail, or fall, do not be afraid, God holds out a helping hand and says to you: ‘Courage!’ You might say, as did Don Abbondio, that ‘courage is not something you can give yourself.’ True, you cannot give it to yourself, but you can receive it as a gift.”

So who is Don Abbondio? And why does the pope keep mentioning him during this pandemic?

The answers lie in an Italian novel revered as the country’s greatest work of 19th-century fiction, and as a masterpiece of world literature. “The Betrothed” (“I Promessi Sposi” in the original Italian), by Alessandro Manzoni, also happens to be one of the pope’s favorite books, as he revealed in a 2014 interview.

He has read it multiple times, and, as his recent remarks suggest, has picked it up once again during the coronavirus pandemic. He mentioned it twice in an April 8 interview in Commonweal, and earlier, in 2015, recommended reading it to couples preparing for marriage. 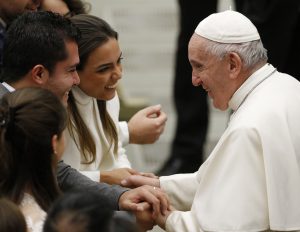 Manzoni was a brilliant poet, a lapsed Catholic, and an enthusiastic follower of the ideals of the Enlightenment. He found his way back into the Church thanks to his wife, a Protestant who converted to Catholicism, and spent more than 20 years of his life working on his only novel.

Set in Spanish-ruled 17th-century Northern Italy, “The Betrothed” tells the story of a young couple, Renzo and Lucia, whose plans to marry are thwarted by the tyrannical Don Rodrigo, a local nobleman who desires Lucia for himself (warning: book spoilers ahead).

The plot introduces some memorable figures, including the Nun of Monza, a noblewoman forced into monastic life turned murderer, to the Unnamed, a mysterious criminal who undergoes a miraculous conversion (both are based on historical characters). The devastating plague of 1630 provides the decisive watershed for each of the story’s chorus of characters.

Of these, the one who has caught the pope’s attention the most during the pandemic is Don Abbondio, Renzo and Lucia’s parish priest. Out of fear of Don Rodrigo, he refuses to marry the couple, thus enabling the villain’s plans.

The cowardly priest’s mentality is described well by a simile at the end of the novel.

“As long as a man stays in this world,” writes Manzoni, “he is like an invalid lying on a bed which is always more or less uncomfortable. Around him he sees other beds, with the bedclothes to outward appearances very neatly arranged, smooth and level; and he concludes that those who lie there must lie very well indeed.

“But if he should contrive to change, no sooner is he in his new bed, and letting his weight rest on it, then bristles in the mattress begin to prick him, and bumps begin to bruise him, so that the last state of the patient is very much like the first.

“And this shows us,” Manzoni concludes, “that we should think less about lying well and more about doing good.”

The figure of Don Abbondio is contrasted with that of another priest, the capuchin Father Cristoforo, a man who found forgiveness — and his vocation — after murdering a rival in a street fight. He courageously denounces Don Rodrigo, and fulfills to the very end his desire to give up his life for the poor.

Don Abbondio doesn’t fit the conventional description of a villain, but rather a mediocre man determined to avoid suffering at all costs and live as comfortably as possible.

That is what makes Don Abbondio’s recent singling out by the pope as a negative paragon so telling. To Pope Francis, he seems to embody a much more serious risk for Christians and non-Christians alike: the risk of spending one’s life without ever learning to love anyone but oneself. While some of the novel’s villains convert, Don Abbondio remains a prisoner of his selfishness until the end. 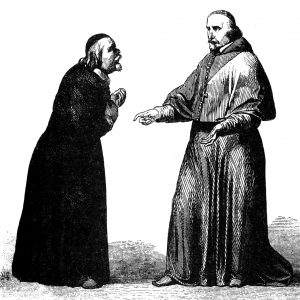 Apart from his fascination with the figure of Don Abbondio, the pope has also seized on how the novel ties together the themes of suffering and conversion. Manzoni provides an answer to the question that is in the back of everyone’s mind, Christians and non-Christians alike, during plagues like the one of Milan in 1630 and the coronavirus in 2020. Why is this happening? Where is God in all this?

At the end of the novel, Manzoni describes the two main characters, Renzo and Lucia, reminiscing about their past adventures.

Renzo still seems to read the events purely through a human lens: He has been lucky to survive, he has made some mistakes, he has learned some practical lessons.

Lucia has been through the same ordeal, yet has come away with a more profound moral: Some bad things happen because of our mistakes, some others don’t, but God turns evil into something useful. How? Because suffering, Manzoni suggests, is an opportunity for conversion, which means to be able to look at things sub specie aeternitatis, or from the point of view of eternity.

Such conversion enables us to see things from the same perspective as God, and to judge others in the same way we would like God to judge us. This is what Father Cristoforo explains to Renzo, when, at the end of the novel, he teaches him to pardon his enemy in the same way that God has pardoned him.

For Manzoni, and — one would suspect — for Pope Francis, the real question is not so much whether we will come out of the plague or the coronavirus, but how. Some will have turned their hearts toward God, like the survivors of Manzoni’s plague.

They will have changed the purpose of their life, letting God turn them from Don Abbondio into Father Cristoforo. As the Holy Father suggested in his Easter homily, that is what conversion looks like. And all it takes is for us to ask.

Others will stay the same. They will think they had luck, will draw some practical lesson, and will continue with their lives, imagining, like the invalid in Manzoni’s example, how comfortable they would be if only they could sit on that other bed.