C3 Conference to apply pandemic lessons to an in-person era

Nearly 1,000 people are expected to join the Catholic Communication Collaboration (C3) Conference in person on Aug. 2 — the first time since the COVID-19 pandemic sent it, like most events, online only.

But as the Archdiocese of Los Angeles’ technological initiative, C3 is using the opportunity not merely to return to a pre-pandemic status quo but to take advantage of newly developed technological infrastructure to expand the reach of their conference.

A descendant of the archdiocese’s foray into Educational Broadband Service (EBS) licenses from the 1960s, C3 officially launched in 2012.

“We kind of referred to it as swampland back then,” conference chair Paul Hernandez said, “because as big as the archdiocese was, it was a good way to communicate and have some content to go out.”

What once was used for PBS-style television programming like “Davey and Goliath” from “Gumby” creator Art Clokey has since become the foundational wavelength for cellphone signals. By licensing their EBS rights to cellular companies like T-Mobile, the archdiocese can invest into new types of technology, adapt to unexpected needs and host the annual C3 Conference to provide training on new technological trends.

C3 programming has been so successful that the average LA Catholic has probably benefited from them without realizing. Throughout the pandemic lockdowns, C3 service technicians helped parishes set up streaming options for Mass, provided video conferencing training, and brought cloud-based collaboration tools like Microsoft 365 or Google Suite.

For thousands of students, C3 enabled the unexpected shift to remote learning in March 2020. Through the Ignite program, C3 provided 31,000 iPads, equipped with wi-fi hotspots, to students at more than 190 archdiocesan schools — ensuring no student missed schooling due to technological inequity.

The opportunity now, Hernandez said, is to sustain the growth seen over the past few years, especially in archdiocesan schools which have increased enrollment by 3.5% nationally, and apply those lessons to other areas.

“We really want to identify things that worked, that were good, that were efficient,” he said

“Maybe there were some good benefits to what we learned for these three years,” he added. “The exposure to the new resources and tools that we had to start using — maybe that’s a good thing. It helps us move in a different direction than we were three years ago.”

That is the core focus of this year’s conference, which will include continued training on the basics of online tools like Zoom as well as newly emerging apps and electronics. Registrants have had online access to a host of on-demand and live web courses through an online platform since July 1, one way that the conference is embracing its theme: “Flipping the Switch.”

Amy J. Cattapan, Ph.D., an award-winning writer and educator, will be presenting in person after leading a session during the 2021 virtual conference. She compared the hybrid event model as following recent schooling trends.

“Many of the presentations will discuss how teachers can ‘flip’ their classrooms,” she said, “where teachers provide students with a video to watch or a passage to read at home, and then class time is reserved for practicing under a teacher’s guidance.”

But “flipping” the classroom goes beyond just providing a virtual and in-person meeting space, according to Cattapan.

“Many teachers have been through a very dark period recently,” she said. “The pandemic has drained us physically, intellectually, and emotionally. We’re looking for the light of inspiration to be turned back on so that we can head back into our classrooms with new ideas, energy, and enthusiasm.”

“We often talk about the ‘light of Christ’s love for us,” Lisa Henley, an author and speaker who will also present at this year’s conference, said in agreement. “I know that for me to share this light with others, I have to activate my own spiritual journey … before we can help someone else flip a switch, we need to bring light into our own lives.”

Though not the original intention of the conference, Hernandez acknowledged that mental health and well-being has quickly become a prominent focus for this C3 Conference.

The C3 Conference will also serve as the launch of a new partnership with Homeboy Electronics Recycling, a part of the gang rehabilitation and re-entry program Homeboy Industries, in the face of a new challenge facing Catholic institutions: e-waste. 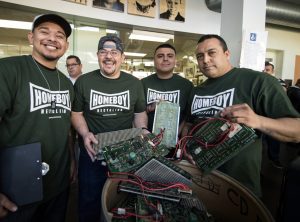 “It just happens because things age out,” Hernandez said. “Whether it’s a new phone system or internet router or wiring, old printers, laptops, it kind of accumulates. We were looking to figure out the best possible opportunity to recycle all of that.”

Through the partnership, Homeboy Electronics Recycling will offer pick-up services of e-waste for Catholic institutions.

“It’s a win-win situation. They have more items so that they can continue to train with their mission, and it helps us because all of our locations end up eliminating all the waste and we have more space,” Hernandez said.

In recognition of the new partnership, Jesuit Father Greg Boyle, founder of Homeboy Industries, will offer an opening keynote address.

“When we get together on Aug. 2 in person, that is really our celebration,” Hernandez said. “That we are still here. That our ministries are still there … and that we’re stronger than we were even three years ago.”