I had a telling in-flight experience on a plane a few years ago. Not a minute had passed after I opened my breviary to pray when the man sitting next to me asked if I was a priest.

The conversation was an illustrative reminder that praying the Book of Hours, the precursor of what is now known as the Liturgy of the Hours or the Divine Office, was long considered an essentially clerical task and largely still is today. That, despite the Second Vatican Council’s invitation to lay men and women to rediscover this everyday prayer of the Church.

In 1970, St. Pope Paul VI revised the canonical hours “so they could more easily be related to the hours of the day and the circumstances of modern life,” and emphasized praying the Book of Hours as “a means to sanctifying the day” (“Laudis Canticum”).

Thirty years later, St. Pope John Paul II warned that “it would be wrong to think that ordinary Christians can be content with a shallow prayer that is unable to fill their whole life.

“Especially in the face of the many trials to which today’s world subjects faith,” the Polish pope wrote in his 2001 apostolic letter “Novo millennio ineunte” (“At the Beginning of the New Millennium”), “they would be not only mediocre Christians but ‘Christians at risk.’ ”

Fortunately for Angelenos, a new exhibit at the Getty Museum offers a window into what Christian prayer looked like when the Book of Hours was the basis of Christian life. “Transcending Time: The Medieval Book of Hours,” which runs through Feb. 20, 2022, at the Getty, features “masterpieces of medieval illumination” from the museum’s permanent collection produced from around the year 1250 to about 1700. 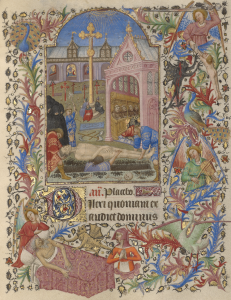 According to Pepperdine art historian professor Cynthia Colburn, Book of Hours artwork makes up almost a quarter of the Getty’s manuscript collection. Use of their pages, she noted, was not exclusive to clergy and religious.

“They are the bestsellers of the later Middle Ages, as the devoted sought a more personal connection to God,” explained Colburn.

The gorgeous illuminations of “Transcending Time” complement and amplify the message of the prayers they contained. Back then, they helped the faithful remember episodes from the Bible, reflect on things to come like death and the final judgment, and meditate on the everyday lives of the saints.

Today, they can help us do the same. As the title of the exhibit suggests, these books “transcend time,” as they connect the everyday life of worshippers with the eternity of God. As St. Augustine knew well, linear time — the succession of hours, days, months, and years — only exists as an accident of this world. For the nonbeliever, acknowledging this can seem a curse, with every minute a reminder of our final dissolution.

But for believers, time is redeemed: Every hour gets us closer to the endless feast of eternal life. In the Book of Hours, the life of the individual is tied to the larger framework of the history of salvation and of humanity’s journey toward eternity.

More simply, the Book of Hours witnesses the need for constant prayer. In a Book of Hours commissioned for a French noblewoman, the prayer of the office of the Virgin Mary is illustrated by an image of Mary spinning wool. She is depicted as a typical medieval lady. As she interrupted her everyday routine to pray with it, the woman who owned the book was reminded that Mary had spent countless hours going about similar tasks. That regular prayer, we can imagine, sanctified her everyday routine.

In another illumination, a French female patron is depicted at the foot of the enthroned Virgin Mary. The accompanying Latin prayer “Obsecro Te” (“I Beseech You”) is a humble supplication for help in all moments of life: “Come and hasten to my aid and counsel, in all my prayers and requests, in all my difficulties and necessities, and in all those things that I may do, may say, or may think, in every day, hour, and moment of my life.”

According to Colburn, “Books of Hours could be personalized in other ways as well, such as through the inclusion of suffrages, or short prayers to saints who were likely important to the owner of the book.” 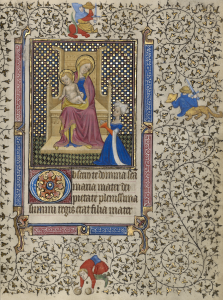 "A Woman in Prayer before the Virgin and Child," 1410, Follower of the Egerton Master. (The J. Paul Getty Museum)

One of the illustrations in “Transcending Time,” for example, depicts 15th-century Italian St. Catherine of Bologna. It was commissioned in part by the daughter of an Italian duke, who “may have had a personal connection to the saint, given that only about 10 years came between the death of St. Catherine and the production of the manuscript,” said Colburn.

Prayer marked the times of day as well as the times of the year, and the whole of human life. The most impressive illumination in the exhibit is found on the pages for the Office of Dead in a 15th-century Book of Hours.

In the central image, a body is buried in a grave while friars celebrate the deceased man’s funeral Mass in an adjoining church. The page’s bottom margin shows the man’s last struggle: While on his deathbed, a demon and an angel fight over his soul while another person prays for him.

The accompanying text contains the stirring words of Psalm 116: “I have loved the Lord, because he listens to the voice of my prayer. … The snares of death encompassed me” but, the psalm continues, “you have delivered my soul from death, my eyes from tears. … I will walk before the Lord in the land of the living.”

The rest of the illustration leads to a happy ending: On the right margin, an angel plays music in the company of peacocks (a symbol of Christ’s resurrection in medieval thinking) in heaven. The deceased’s soul escapes the claws of a demon and an angel welcomes him. The man’s body is rejuvenated as he is born again into eternity.

In “Transcending Time,” believers can get a glimpse at how the structured prayer life of the Book of Hours was about more than just final salvation. As Pope John Paul noted in that 2001 letter, true prayer helps us live better in the present, too.

“Learning Christian prayer and living it fully in personal experience,” he wrote, “is the secret of a truly vital Christianity, which has no reason to fear the future, because it returns continually to the sources and finds in them new life.”