Why our work is cut out for us

Although I am currently in recovery, in 2009 I was a full-blown news junkie. So I consider it remarkable that I did not hear about a particular news story from two presidential administrations ago. Thanks to the internet trend of repurposing old stories, this now 12-year-old article came to light. And with “eucharistic coherence” entering the vernacular, this “old” story is new again and as relevant as the day it was first reported.

In 2009 on a visit to Mexico City, the then-U.S. secretary of state was touring the basilica that houses St. Juan Diego’s tilma, which bears the image of Our Lady of Guadalupe. Remarking on its beauty, the secretary of state asked the monsignor who was conducting the tour for the name of the artist who created the image.

We should certainly cut the secretary a little slack, since she was not Catholic. Then again, this is a person who was educated in some of the most elite institutions of higher learning the world has to offer. Credentials from these schools are attached to people in power all the time as further proof they have what it takes to engage in politics, commerce, and the arts at the highest levels. Parchments declaring graduation from such esteemed institutions are put on office walls the way a knight of old might hang his shield with the family crest emblazoned on it. 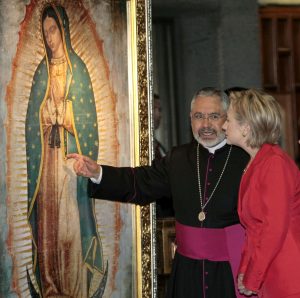 If someone with this education can be ignorant of such a vital element of Catholic tradition, what about people without Ivy League degrees? Popular culture is rife with examples. Take, for example, an episode of the reality show “Pawn Stars,” in which people try to sell belongings but first must wait for an appraisal of what they have. In this case, someone tried to sell a Catholic relic, which was treated with all the respect one would expect it would get in a pawn shop.

Thankfully, the relic was not purchased, but it was still relegated to the moral equivalent of a rabbit’s foot. And if misinterpretations and misunderstandings about the Immaculate Conception on late night comedy shows and television in general were loaves and fishes, multitudes would eat.

Devout Catholics are not obliged to believe in the miracle of the Virgin Mary’s apparitions in Mexico, or Fátima, or any place else for that matter. The Church in her wisdom leaves some elements of our faith journey for us to figure out for ourselves. Maybe someday science will explain how St. Juan Diego’s tilma still exists nearly 500 years after it was made from organic material that should have disintegrated in 20 to 60 years.

However, there are some things the Church does insist its family members believe. We must believe the “Amen” we say when a priest holds the Eucharist before us and declares unequivocally, “The body of Christ.”

A recent Pew Research study revealed that an uncomfortably large percentage of self-identified Catholics do not believe in the Real Presence of Jesus in the Eucharist. I think it is safe to assume we have our work cut out for us (and I’m not talking only about the bishops). We all must not only believe in the body, blood, soul and divinity that resides within a sanctified host, but we can share that belief with others, even fellow Catholics.