Living with the coronavirus (COVID-19) has given rise to some interesting sleep patterns. I typically find myself awake, for example, around 3 a.m.

Often my mind wanders to possibilities for future columns, and I turn to my phone.

Online searches, as we know, can take on life-of-their-own twists and turns. Thus it was that one recent night I found myself at the Library of Congress (LOC) in Washington, D.C.

This is a rabbit hole, I saw instantly, into which a person could disappear for days. But the LOC is a resource that educates, delights, and inspires pride in our landscape, achievements, and people! Better this, I consoled myself, than many of the other rabbit holes that do the opposite.

I skipped over “Leaders & Statesmen,” “U.S. Presidents,” and “Activists & Reformers” and went straight to “Writers & Artists.” (You can also explore “Entrepreneurs,” “Scientists,” “Athletes,” “Entertainers,” and more).

Here you can learn how architect Frank Lloyd Wright “looked to Japan,” how photographer Dorothea Lange came to document the abysmal conditions of the migrant workers who traveled in large numbers to California during the Great Depression of the late 1920s and 1930s, how Langston Hughes (“From Busboy to Poet”) became one of the leading lights of the Harlem Renaissance, and how Mark Twain came to choose his pen name.

You can “Explore the States” (Illinois: “A Baboon, A Dog, and a Donkey”; New Hampshire: “Live Free or Die”; Nebraska: The Cornhusker State).

You can “See, Hear and Sing” (“Buckaroos,” “Children’s Songs,” “Disaster, Devastation, and Destruction.”)

Again I rejected such taxing categories, this time in favor of “America at Play.” It was here, lying in bed unable to sleep, that I descended into the dreamy universe called “Stitch a Quilt.”

“If you think about a quilt like a sandwich, then the two pieces of fabric are the bread and what's in the middle — wool or cotton filling — is the stuffing. All three layers are stitched together so the filling doesn't move around. These layers trap air and act like insulation, keeping the person underneath the quilt warm. Although the quilt could be made of plain pieces of fabric, it’s usually not. What do you think you do to start making a quilt?”

I turned the fan up a notch and thought, “Hire someone?”

But studying the images of these intricate creations, I quickly realized that the work the women had put in was beyond price. The very names of the patterns spoke of their dreams, hearts, and pain: Double Wedding Ring, Stardust, Sunburst, Wishing Star, Lone Star, Turkey Track, Flower Garden, Ohio Rose, Drunkard’s Path.

From “Stitch a Quilt,” I somehow found my way to a separate but related LOC treasure trove. “Quilts and Quiltmaking in America, 1978 to 1996” comprises 181 segments from recorded interviews with quiltmakers and 410 graphic images from two LOC American Folklife Center Collections.

To hear the women’s lullaby-like voices, through my phone, was wondrous. I soon became entranced with the stories of Virginia quilt-maker Lura Stanley.

“I have wool blankets my mother wove.”

“I loved quilts even when I was a little girl.”

“I pieced ’em, but I didn’t quilt till after I was married.”

“I never quilt in the summertime.”

Like many of her sister Blue Ridge Parkway craftswomen, Stanley spent the summer gardening, canning, and putting up preserves. 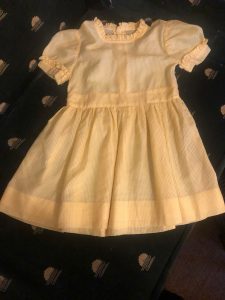 Heather King's mother sewed this dress for her when she was five years old. (Courtesy Heather King)

Five others were featured: Ila Patton, Donna Choate, Mamie Bryan, Maggie Shockley, and Zenna Todd. They spoke of using the unbleached muslin from flour and feed sacks, of unraveling old socks for thread, of marking the pattern with pencil or chalk, of setting up makeshift quilting frames by the woodstove in between farm chores.

Almost to a woman, they spoke of learning from their mothers and of making a quilt for each of their grandchildren.

Lura Stanley again: “This is a quilt my great-grandmother made.” “This quilt I gave to my grandson.”

Those quilts and everything they symbolized: busy hands, making do, pride of place, the desire to leave something behind — something that costs — spoke of everything that’s best in America.

“Quilts Have Memories,” the LOC observed, and my mind drifted back to my own New Hampshire childhood.

My mother didn’t quilt but she sewed: drapes, slipcovers, dolls’ clothes. She was everything I’m not: patient, practical, mild. During the eulogy I gave at her funeral, I’d brought up to the podium the little yellow-and-white gingham dress, with handworked buttonholes, she’d made for me when I was 5. I’ve carried that dress around with me, from apartment to apartment, all my adult life.

It was hanging in the closet not 10 feet from my pillow. I put my phone aside, clutched my rosary a little tighter, and slept till first light.