ROME – To be honest, 2021 wasn’t really a banner year in terms of Vatican news. This wasn’t 2013, with the surprise resignation of Benedict XVI and the election of history’s first Latin American pope, nor was it even 2016, with the avalanche within Catholicism triggered by Pope Francis’ “Amoris Laetitia” (“The Joy of Love”) .

By now, the broad contours of Pope Francis’ papacy are clear and no longer generate the same tumult. Instead, what we saw over the last 12 months was more akin to a series of vignettes, each fascinating in its own way, even if none may represent a generation-defining historical turning point.

Herewith, then, a highly subjective list of the Top 5 Vatican stories of 2021, with the full expectation that the news flow out of the Eternal City will continue unabated in the New Year — let’s face it, from a reporter’s point of view, the Vatican is just the gift that keeps on giving. 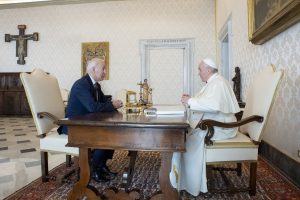 Technically, the relationship between a head of state and his or her local bishops’ conference isn’t a Vatican story, but when that leader is the president of the United States, the stakes go up and Rome, inevitably, becomes a player. That’s especially foreordained when POTUS is also a Roman Catholic, as in the case of President Joe Biden.

When the U.S. bishops first announced they were considering a document on the Eucharist that might bear on the intensely debated issue of whether Biden and other pro-abortion rights Catholic politicians should be denied Communion, the Vatican’s Congregation for the Doctrine of the Faith dispatched a strongly worded letter in May urging them to stand down.

The bishops nevertheless voted to go ahead with the document, which was read in some circles as a gesture of defiance to both Biden and Pope Francis. The perceived tension lent an atmosphere of drama when Biden made what would otherwise have been considered a largely pro forma visit to the Vatican in late October, while in Europe for a G20 summit.

Not only did Pope Francis and Biden have an unusually long 75-minute private meeting, but afterwards Biden told reporters the pontiff had complimented him on being a “good Catholic” and told him to continue receiving Communion. While the Vatican never confirmed those remarks, they never denied them either, and the clear impression was left that Rome was not uncomfortable with the result.

Not long afterwards the U.S. bishops adopted their document, basically avoiding the Communion question altogether — which, by default, means no real change to the status quo, in which each bishop decides such matters on his own. 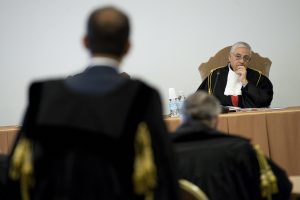 In July, the Vatican’s promoter of justice, in effect its chief prosecutor, issued a sprawling indictment of 10 individuals, including, for the very first time, a prince of the Church, Italian Cardinal Angelo Becciu, along with a handful of corporate outfits, charging them with corruption, embezzlement, and other forms of financial crime.

The Vatican’s civil tribunal ordered the defendants to stand trial over the accusations, which center mostly on a failed $400 million real estate deal carried out by the Secretariat of State and featuring the purchase of a former Harrods warehouse in the posh London neighborhood of Chelsea.

At the time, Vatican spokespersons heralded the trial, unprecedented both in scope and in the inclusion of a cardinal, as the ultimate proof of the success of Pope Francis’ financial reforms. By the end of 2021, however, it was beginning to seem like the “Trial of the Century” could end as the “Trainwreck of the Century.”

The main bone of contention is a series of audio and video recordings made by prosecutors of their key witnesses, which they first refused to turn over to defense lawyers as part of the discovery process, and then, in response to repeated court orders, submitted in redacted form with about two hours of missing material.

It’s still not clear when, or if, the court and defense attorneys will get the unexpurgated version, or whether, by now, the process has been so fatally tainted as to render the equivalent of a mistrial inevitable. Presiding Justice Giuseppe Pignatone is expected to issue a series of rulings in late January, describing the current situation as an “open construction site” in a mid-December hearing. 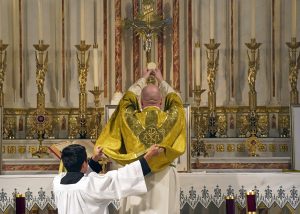 Father Stephen Saffron, parish administrator, elevates the Eucharist during a traditional Latin Mass on July 18, at St. Josaphat Church in the Queens borough of New York City. (CNS/Gregory A. Shemitz)

If one of Pope Benedict XVI’s signature decisions was his 2007 document “Summorum Pontificum” (“Of the Supreme Pontiffs”) liberalizing celebration of the older, pre-Vatican II Latin Mass, then Francis’ “Traditionis Custodes” (“Custodians of Tradition”), issued in July, rolling back those permissions and adding some new restrictions of his own, was equally emblematic.

Nor did the Vatican appear cowed by backlash from the traditionalist camp. Not long after the document appeared, British Archbishop Arthur Roche, Pope Francis’ hand-picked successor to Cardinal Sarah, gave interviews essentially suggesting it’s time for the entire Church to get on with the liturgical reforms of Vatican II and drop any nostalgia for times past, and the pope’s own Diocese of Rome banned use of older liturgical books for Holy Week celebrations. 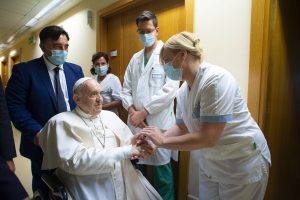 Pope Francis gives a rosary to a member of the medical staff at Gemelli hospital in Rome July 11, 2021, as he recovers following scheduled colon surgery. The pope was in the hospital for 10 days. (CNS/Vatican Media via Reuters)

In early July, the Vatican announced that Pope Francis was heading to Rome’s famed Gemelli Hospital to undergo a “planned” surgery to treat “symptomatic diverticular stenosis” of the colon, a condition that involves bulges in the wall of the large intestine that can lead to a narrowing of the colon, often producing bloating and abdominal pain.

(As a footnote, Pope Francis actually chose July 4 to reveal his condition to the world, thereby capsizing many expat Independence Day celebrations in the Eternal City.)

Initially, Pope Francis was expected to return to the Vatican after just a couple of days of recovery, but, in the end, he spent 10 days in Gemelli before going home. It was the first hospitalization of Pope Francis’ papacy, and the first real health scare for the now 85-year-old pontiff since his election in 2013.

Though the Vatican has never said so out loud, it’s widely believed that recovery from the surgery proved more protracted than expected, perhaps influencing, among other things, Pope Francis’ decisions about travel. Prior to the COP26 summit in Glasgow, Scotland, for example, he told a reporter that the only reason he wouldn’t go would be his health; in the end, the pope was a no-show.

While in general Pope Francis’ health seems robust, leaving him well enough to complete a demanding recent trip to Cyprus and Greece, the colon surgery nevertheless was a reminder of his mortality, and also, perhaps, provided motive in some quarters to begin thinking about what might come next. 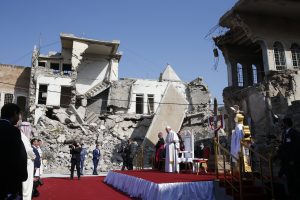 Pope Francis participates in a memorial prayer for the victims of the war at Hosh al-Bieaa (church square) in Mosul, Iraq, March 7. (CNS photo/Paul Haring)

Against all odds, Pope Francis took a high-stakes trip to Iraq over four eventful days, March 5-8, arguably the most significant overseas journey of his own papacy, and one of the most meaningful of all time.

Pope Francis visited the cities of Ur, Baghdad, Najaf, Qaraqosh, Erbil, and Mosul, meaning he traveled not only to the usual sites of biblical and political significance, but also to the cradle of Christianity in northern Iraq devastated by an ISIS occupation from 2014 to 2017.

The fact the trip happened at all, in the teeth of the COVID-19 pandemic and chronic security concerns, testified to the depths of Pope Francis’ desire to go. There were many highlights, but images from Najaf of the pope with Grand Ayatollah Sayyid Ali al-Husayni al-Sistani, the spiritual leader of Iraq’s Shia Muslim community and one of the most important figures in Islam globally, quickly emerged as a testament to the possibilities of dialogue and friendship, countering narratives of an inevitable “clash of civilizations” between Christianity and Islam.

In the wake of the trip, the Muslim-dominated government of Iraq declared March 6 a national “Day of Tolerance and Co-Existence,” to commemorate the meeting between Pope Francis and the ayatollah.

It remains to be seen whether fallout from the papal visit will fundamentally alter the usually grim calculus in Iraq, but simply as a display of personal bravado and pastoral determination, Francis’s brief trip to Iraq was a remarkable moment – and, therefore, also the top Vatican story of the year.