How LA's pilgrim painter found his 'destiny' in the Church

He’s 52 now, living in Culver City with his wife and children.

But with the soul of a pilgrim, he took a circuitous route to get here.

After graduating from college, he ended up in a little fishing village in northern Brazil called Viseu. He stayed six months and painted a three-panel mural in a local church.

Back in Italy, he painted little niches meant to hold a religious painting or sculpture for a time. Then the bishop in Brazil called him back to paint the Church of Nossa Senhora do Rosário e São Benedito in Paraty. “That was a big job. The fifteen mysteries of the rosary, 30-by-30 feet for each of 3 ½ walls.” 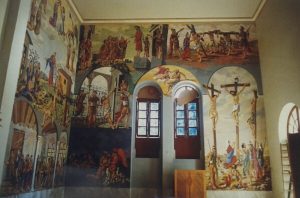 An interior section of the Church of Our Lady of the Rosary and St. Benedict in Paraty, Brazil, painted by Piubeni.

During that time, he met several practicing Catholic friends who asked, “Where do you come from? Where are you going?” He took the questions to heart.

He returned to Italy and began to travel throughout Europe, sleeping in his car. He’d arrive in town, set up his easel, and paint landscapes for tourists: France, Switzerland, Spain.

He did a stint in Miami: “Hot in summer, snake.”

Around 2000, he finally made it to LA. He went to Beverly Hills and painted in the street: houses, gardens. “The lady of the house would see me, come out, and ask, ‘Why don’t you paint my house, too?’ ” He sold at least a hundred paintings that way.

He painted murals in a couple of local churches. Every three months his tourist visa would expire and he’d have to leave: Mexico, Canada, Italy, Brazil. He enjoyed the “precarity,” as he calls it. Nothing is forever.

Then he got a ticket to Peru — and a friend introduced him to the woman who became his wife.

They married in 2004, in the Church, at Lima. Both returned to LA and became citizens.

From that point on, the sacrament of marriage had to come before the painting.

“If I follow myself, I don’t go anywhere. I don’t find the meaning. I have to obey someone. And the sacrament is that point for me.”

A typical painting by Piubeni showing the Manhattan Beach Pier.

He opened a little gallery in Manhattan Beach, but when the children began to come, the family moved to a bigger place in Culver City. They attend St. Gerard Majella at Inglewood and Culver Boulevards. “Tiny parish, big pastor.”

He has four children. One lived nine hours before passing away. That was five years ago. His others are Giacomo, 16, Vittorio, 14, and Camilla, 13.

“I don’t pretend to be van Gogh. I’m a commercial artist. I’m one of a thousand. I do simple landscapes to support my family. I don’t do what I want to do; I do what the people who buy my paintings like me to do. If I paint the Manhattan Beach Pier 10 times, I’ll sell all of them. If I paint the Virgin Mary, I don’t sell one.”

To work outdoors in Southern California is a joy, though there are many other places in the world he loves as well.

Before he had a family, he’d travel up and down the coast, to San Francisco, Santa Barbara, San Diego. Now, he stays on the local beaches, from Malibu to Pacific Palisades, San Clemente, Laguna.

In winter, he’s more in, say, Hollywood or downtown. Pershing Square is one favorite haunt.

He starts out from Culver City at 6:30 a.m. He’ll bring an easel with small cans of acrylic, a brush, and a palette knife. Or he might do watercolors on paper that day. 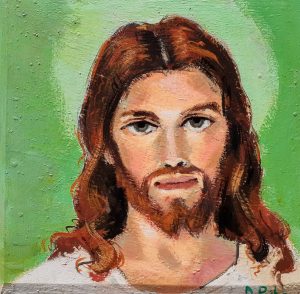 Piubeni's depiction of the face of Christ.

“I’ll start painting. People come. Someone might ask. One might just be curious. Someone might want a commission. Every day is different. I need to be among people, not always in my studio. I know many locals and I meet many others from all over the world. For lunch, an apple. Water.”

He leaves in time to beat the rush hour and pick up his son at middle school at 3 p.m.

Where do we come from? Where are we going?

He’d rather be doing religious painting. But no matter how great the art, and how much it might mean to the artist, with art alone he says, “you can arrive in purgatory, but not paradise.”

Davide wouldn’t have it any other way. And however commercial his work might be — the Venice boardwalk, a quiet stretch of beach in Malibu, a portrait of Christ — his paintings have a liveliness, a light, and a love that belie his modesty.