The cellist who made good servants of art

Gregor Piatigorsky (1903-1976) was a Russian-born cellist who immigrated to the U.S. and ended up making his home in Los Angeles. He was a beloved teacher at USC, an inspired mentor, and a sublime musician.

Born in Ekaterinoslav, Ukraine, he began playing cello at 7, and was soon supporting his entire family by playing in bordellos and cafes. He credited a gypsy singer he met during this time with helping him to attain his singing cello tone.

With a small inheritance, his father Pavel moved the family to Moscow so that Gregor could continue his studies at the Conservatory.

Conditions under Lenin were abysmal. People went hungry and without heat: funding for the arts dried up. As a young musician, Piatigorsky was so broke that he sometimes had to make do with harp strings, which he could cut in two and thus make last longer. In 1921, he and a group of fellow musicians bribed some guards, snuck across the Polish border, and defected.

Starting at the age of 18, he studied music in Berlin and Leipzig, then made his way to Italy, and finally, across the Atlantic. He made his U.S. debut in 1929.

After an unhappy first marriage, he met and in 1937 married Jacqueline de Rothschild of the wealthy French banking family. The couple returned to Europe, then under the Nazi occupation fled back to the U.S. and settled in the Adirondacks before eventually finding their way to Southern California. Jacqueline became a noted sculptor and chess champion. The couple had two children. 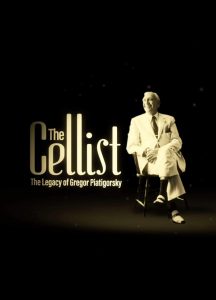 In 1949, Piatigorsky joined Arthur Rubinstein on piano and Jascha Heifetz on violin to perform a series of concerts in Chicago. The three masters of classical music were dubbed the “Million Dollar Trio.”

That same year, he purchased the home in Brentwood where he would live for the rest of his life.

He taught variously at the Curtis Institute of Music in Philadelphia, Tanglewood in western Massachusetts, Boston University, and from 1962 until his death, at our own USC.

In 1965 he published his autobiography, entitled simply “Cellist.” His biographer and former student Terry King affectionately observes that Piatagorsky was not above telling a tall tale and frequently embellished his stories. But no matter which way you cut it, his life — the poverty, the upbringing in Czarist Russia, the escape to the U.S., the glittering touring schedule — was the stuff of fairy tales.

He was universally acknowledged as being generous, warm, an equally gifted performer and teacher.

He was praised by conductor Serge Koussevitzky as “the greatest cellist of our day.” Pablo Casals observed, “He is the rarest of them all. He is a born artist.”

Violinist Isaac Stern recalls watching Piatigorsky maneuver a cello through a narrow corridor of orchestral musicians. “He would hold it at shoulder height, straight ahead, as he walked — a magnificent gesture and a lesson to me in the need to establish a certain character of one’s own when coming onstage.”

“The Cellist: The Legacy of Gregor Piatigorsky,” a 2017 documentary (available from First Run Features) gives a wonderful overview.

“An Afternoon with Gregor Piatigorsky,” a 16-minute short that is free on YouTube and filmed at his Brentwood mansion, is also well worth viewing.

“Nobody can really choose music as a profession like you can choose to become a dentist. It chooses you,” he intones in his charming Russian accent. “The cello. That wooden box with four strings. … [No matter how well you perform], the music remains above you. You have to give all your life only to discover it’s not enough.”

His active family, he observes, sees him sitting quietly at his desk. “Father! You do nothing! Why don’t you do something?” He tells them, “I do! I’m thinking! It is an activity!”

He thinks of the young people who come to him from all over the world. “Their problems, weaknesses, character in their development. … This is a big responsibility.” 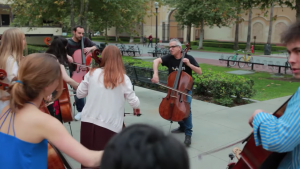 The Piatigorsky International Cello Festival presented by the USC Thornton School of Music and Los Angeles Philharmonic. (Screenshot via YouTube)

Handsome, distinguished, silver hair brushed back, he gives himself absolutely to the student in front of him.

“To teach music is not like teaching math or science. It’s too wide. Spiritual, emotional values. … My main aim as a teacher is to make them want to be good servants of art. It is a very, very honorable occupation.”

“They deal with beautiful matters and so they must become beautiful themselves.”

He sits down and plays Minuets 1 and 2 from Bach’s Cello Suite in G Major. His music has made grown men cry. He draws all of the human condition from the strings.

“I don’t remember a time when I was bored. I don’t believe in boredom … this constant fascination … it doesn’t always have to be tremendously joyful … many people behave as if there is something better than life. But there is nothing better.”

Piatigorsky died at home of lung cancer in 1976, and is buried in the Westwood Village Memorial Park Cemetery.

Two years prior, the Gregor Piatigorsky Endowed Chair of Violoncello was established in the strings program of the USC Thornton School of Music in his honor.

And in 2016, the Thornton School of Music and the Los Angeles Philharmonic inaugurated the Piatigorsky International Cello Festival, most recently a 10-day, 42-event cello extravaganza that has attracted cellists, both masters and students, from all over the world.

“Why not become the best of you?” he always asked.

Modern-day philosophers and the Church they loved