The beauty of slow miracles

A friend asks me to write about miracles, taking as an example the events that brought him and his wife together in a happy marriage now in its 58th year. To his credit, he doesn’t suggest their case is exceptional. Rather, he sees it as an instance of God’s hand at work in their lives, just as God is at work in everyone’s lives. Other people, he suggests, might benefit from seeing their lives the same way he and his wife see theirs.

The happy experience of my friend and his wife certainly doesn’t involve anything resembling what we usually call miracles — instantaneous occurrences in which God sets aside the laws of nature to produce some desirable result. 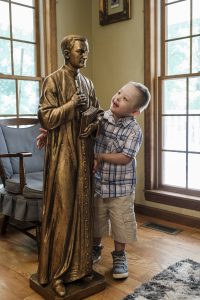 Mikey Schachle, 5, examines a statue of Father Michael McGivney in his home on June 2, 2020. His parents, Dan and Michelle Schachle prayed to Father Michael McGivney to intercede with God to save their son, still in his mother's womb, who was given no hope of surviving a life-threatening case of fetal hydrops. (CNS photo/Rick Musacchio, Tennessee Register)

The classic examples are Jesus’ miracles — curing lepers and paralytics and raising the dead. This is the kind of miracle that provides evidence for beatification and canonization. A recent instance is the curing in 2015 of a child in utero from a life-threatening condition, a miracle that led to the beatification of Knights of Columbus founder Father Michael McGivney (scheduled for Oct. 31in Hartford).

Events like these are what the great 20th-century Christian apologist C.S. Lewis calls “instant” miracles. But besides them, there are the things Lewis termed slow miracles, which take place over time.

“A slow miracle is no easier to perform than an instant one,” he remarked, but it’s harder to recognize because it involves a series of events more or less unremarkable in themselves that lead to a particular outcome. Slow miracles include what St. John Henry Newman calls “providences,” adding that it is “often very difficult to distinguish between” the two. These providences, he says, are not strictly miraculous, but are better understood as “providential mercies … what are sometimes called ‘grazie’ or ‘favors.’ ”

Usually, of course, such happenings are what people have in mind when they speak — perhaps dismissively — of what they call “coincidence” or “chance.” And that is a mistake, for these things are God’s instruments for shaping and reshaping lives just as surely as instantaneous miracles are.

From what my friend tells me, this was the case with the unexpected and somewhat improbable combination of circumstances that all those years ago led him and his wife, both of them physicians now but unacquainted back then, to take the same course while they were both studying medicine. And the rest, as they say, is history, and a slow miracle if ever there was one.

He writes that he and his wife “believe that our marriage is of this kind, and we think some people will benefit from recognizing a similar experience at work in their own lives.” In this, he is resoundingly right. For their experience, though unique to them in its specifics, is one that all of us can see at work in our own lives if we look closely.

Pause and think about it. The neighborhood you grew up in, the schools you attended, jobs you got — or didn’t get — successes, failures, people who became part of your life — friends, sweethearts, spouses, children, bosses, coworkers. Call them coincidences if you like, but these are the signs of God’s action, gently (or not so gently) nudging us.

Don’t spend a lot of time looking for instant miracles. If one happens, you’ll know it. Open your eyes instead to the slow miracles that have already occurred in your life and may still be occurring. Be grateful for them. That’s the message my friend wanted to get across, and how right he is!