ROME — Pope Francis recently approved two sweeping reforms, one of the process leading up to the next Synod of Bishops and the other of the section on crime and punishment in the Code of Canon Law. Both have been widely hailed as monumental turning points, especially by the Vatican’s own media outlets.

So, let’s play a game I like to call “How big a deal is this?” On a scale of 1 to 10, where should these two reforms rank in terms of importance and lasting consequence?

The correct answer in both cases, I would submit, is 5, mostly because it’s 10 divided by 2. In other words, these are both a possible 2 with the potential, but only that, to be a 10.

Why? Because like so many much-ballyhooed initiatives and reforms that roll out of the Vatican, the important part isn’t what people say when they’re announced, but what happens in reality once they’re on the books. The wise Vatican-watcher will withhold judgment and channel his or her inner Missourian, taking a “show-me” stance.

Let’s begin with the Synod of Bishops.

The next synod, devoted to the theme of synodality … yes, it will be a synod on synods … originally was scheduled for October 2022, but was delayed due to the coronavirus pandemic and is now set for October 2023.

According to changes announced in late May, Pope Francis wishes to transform this next synod from an event into a process, emphasizing wide consultation at all levels of the Church. It will unfold in three stages: A diocesan phase, a continental phase, and a universal phase. The opening working document for the synod, called an “instrumentum laboris” (“working instrument”) and on which much of the discussion is based, will be drafted according to the results of diocesan and continental phases.

According to a May 21 Vatican communiqué, the three-stage process “will help to make possible a true listening to the People of God to ensure the participation of all in the synodal process.”

“It is not just an event, but also a process that involves in synergy the People of God, the College of Bishops and the Bishop of Rome, each according to their proper function,” the communiqué said. 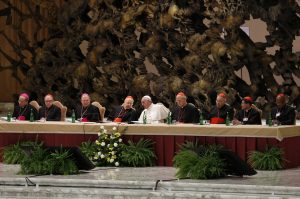 Pope Francis and synod officials at an event marking the 50th anniversary of the Synod of Bishops in the Paul VI Audience Hall at the Vatican in 2015. (CNS/Paul Haring)

Pope Francis will inaugurate the diocesan phase of the synod this year on Oct. 9-10, with each bishop opening that phase of the synod in their own respective dioceses on Oct. 17. The Vatican’s Synod of Bishops office will send out a preparatory document and questionnaire to all dioceses, as well as the offices of the Roman Curia and the heads of religious orders.

After that, dioceses will make reports to their national bishops’ conferences, and then representatives of the conferences will consult on a continental level. That phase is scheduled for September 2022 to March 2023. The idea is that when the bishops finally assemble in Rome in October 2023, they’ll be prepped with input from everybody.

The thing is, ever since the Synod of Bishops was created by St. Pope Paul VI in the wake of Vatican II, it’s never really lived up to its potential. It was always supposed to be an expression of collegiality and participatory governance, but, in reality, many cynics would say it’s played out as little more than an expensive talk shop, often simply ratifying conclusions that had already been reached from on high.

Will it be different this time? The only credible answer at this point is, “We’ll see.”

As to the overhaul of book VI of the Code of Canon Law, the penal section of Church law, it too has a long history. The project was launched under Pope Emeritus Benedict XVI and has been roughly 12 years in the making. The core idea is to overcome the idea that punishment for crime is somehow unmerciful or unpastoral, transforming the administration of justice into a routine feature of the life of the Church.

There are a few tweaks to the content of the law, including as it regards sexual abuse. The crime of “grooming” someone for abuse was added, and the new code also criminalizes the use of “force, threats or abuse of authority” to solicit sex against anyone, meaning adults as well as minors.

More sweepingly, the revisions say that bishops “must” impose the prescribed penalties for these crimes. The previous version of the code, issued in 1983, simply said that bishops “could,” but there was a clear emphasis on avoiding criminal procedures if at all possible, preferring “pastoral” remedies that were perceived as more in keeping with a spirit of mercy and forgiveness. 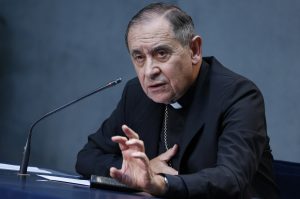 Bishop Juan Ignacio Arrieta, secretary of the Pontifical Council for Legislative Texts, at a press conference to discuss revisions to the Code of Canon Law, at the Vatican on June 1. Pope Francis promulgated a revised section of the Code of Canon Law dealing with crimes and punishments. (CNS/Paul Haring)

Again, here’s the thing: Under both the Code of Canon Law of 1917 and that of 1983, sexual abuse against either a minor or a vulnerable adult could have been considered a crime and prosecuted. The problem wasn’t really the law, but a mentality that said such matters were better handled quietly and informally.

What we need time to assess, therefore, isn’t what the new law says, but how it will be applied and enforced.

The bottom line is this: If the new systems for the synod and for crime work as advertised, then we’re looking at genuine revolutions with lasting consequences for the Church, not just in the United States but everywhere. On the other hand, there’s a long history of such reforms starting with a bang and ending with a whimper.

Allegedly, Chinese Premier Zhou Enlai once said of the consequences of the French Revolution almost 200 years after the fact, “It’s too early to tell.” Whether that’s true or simply urban legend, the point nevertheless applies to almost any alleged Vatican watershed in the moment in which it’s announced, including the two latest on the synod and the law.