St. Joseph and the crisis of fatherhood

Launched in December with modest fanfare, the Church’s observance of 2021 as a year to honor the fatherhood of St. Joseph seems to have dropped largely out of sight. True, a plenary indulgence (under the usual conditions) is available to those who practice a devotion to St. Joseph on Wednesdays during the year, but otherwise not much seems to be happening.

And that’s too bad. For although Jesus’ foster father doesn’t need the attention, a rousing defense of fatherhood just now would come in handy.

Why? Because in the United States, as in many other countries, the role of father is in crisis today. And the resulting upsurge of essentially fatherless children is a social calamity. The apostolic letter “Patris Corde” (“With a Father’s Heart”) that Pope Francis issued to mark the start of the year of St. Joseph is largely devotional, but it does speak, briefly but pointedly, of the fatherhood crisis.

“Fathers are not born, but made,” the pope wrote. “A man does not become a father simply by bringing a child into the world, but by taking up the responsibility to care for that child.” And then this punchline: “Children today often seem orphans, lacking fathers.”

There are, of course, some genuine orphans. But the orphans of whom the pope spoke are those comprising the growing number of kids whose fathers, although alive and well, simply aren’t doing the job.

Numbers suggest the dimensions of the problem in the U.S. As of 2019, there were roughly 16 million American children — about one out of every four — without a father in the home. And while that can happen for a number of reasons, by far the largest reason is family breakdown and the huge rise in births out of wedlock. 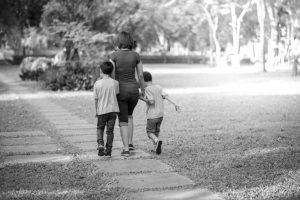 The nation was first alerted to that problem in 1965 when Daniel Patrick Moynihan, then an assistant secretary of labor and later a U.S. senator, published “The Negro Family: The Case for National Action” — better known as the Moynihan Report — examining family breakdown among African Americans. Then the rate of out-of-wedlock births among blacks was 25%. Now it is 70%. And now, too, it has shot up among Hispanics (52%) and whites (over 28%).

Nor are Catholics exempt. Years ago, I was surprised to learn that the parochial school two of my grandsons attended (in a well-to-do suburb) had a support group for kids from single-parent homes. I don’t know how many schools offer that today, but surely the need hasn’t diminished.

The consequences of all this are disastrous not just for individuals but for society. How disastrous is suggested by social critic Mary Eberstadt in a disturbing essay in First Things. Citing social science data, she argues that a deadly triad including loss of faith in God (the Father in heaven), declining patriotism (love for the fatherland), and the rising incidence of missing fathers has created a “crisis of paternity” that threatens the nation.

“Life without father, Father, and filial piety toward country,” she writes, aren’t the socially neutral phenomena liberal conventional wisdom would make them out to be, but are instead “depriving many young people — especially young men — of reasons to live as rational and productive citizens” with results visible in an upsurge of social unrest and violence.

A year honoring the fatherhood of St. Joseph won’t solve these problems. But it might at least serve to focus attention on them. And surely we can ask the Lord’s foster father to lend us a badly needed hand in seeking solutions.