'Social Dilemma' shows the future in the rearview mirror

Netflix gets a lot of flak these days, and most of it is well-deserved. But there are times when it does produce shows of quality and programs that are thought-provoking. One of its latest offerings, “The Social Dilemma,” has provoked my thoughts in a manner that should make all of us shudder.

Shot in a docudrama style, with real people who were on the ground floor of the social media monolith, and intercut with a scripted narrative, the film reveals the mechanisms the creators of social media engineered to impact lives, and not for the better. It’s scarier than the scariest science fiction movie that envisions computers taking over the world.

The victory the computers have obviously won over us was not brought about by some cataclysmic event like one finds in so many science fiction movies. This was a defeat of a thousand cuts. A slow and steady process, kind of like the old saying about how to boil a frog. You put the frog in a pot of cold water and slowly turn up the heat. When the frog begins to feel the change in water temperature, it’s too late.

In a series of interviews, many of the geniuses behind the creation of social media make a kind of mea culpa for what they created. We see in sickening detail how email, Facebook, Twitter, Instagram, and [INSERT YOUR SOCIAL MEDIUM OF CHOICE HERE] have all been developed to tap into human frailty — namely, using our internal fallen nature and our bent toward addictive behavior to make a buck. 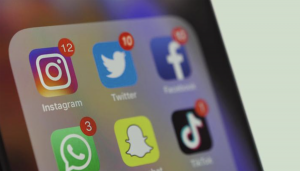 The star, or stars, of this film are not the humans. They are the massive pieces of technological hardware that whirl away unceasingly at every click, at every virtual location a user visits, and on every video a user watches. Based on the data collection, the artificial intelligence (AI) kicks in and determines what the user should see next, whether it’s an advertisement for a new sneaker or a political point of view that matches their pre-existing sentiment. In this way, the AI is manipulating people on a subliminal level. When it comes to political thought, these unseen hands magnify the polarization we now see manifested in burning streets from coast to coast.

But don’t worry: it gets worse. The film delves into the psychological damage addiction to social media visits upon young people, in the form of isolation and putting peer approval on hyper-drive. It also makes a strong case that social media has played a role in the increase in youth suicides. The Center for Disease Control found suicides among people 10-24 years of age skyrocketed 56% from 2007 to 2017, just as social media’s AI algorithms were hitting their stride. It all makes me pine for the days of rotary phones.

I have no scientific data to prove this, but the isolation and manipulation of actions in social media might also explain the growing population of “nones” among young people. Why wouldn’t people drift away from the Church, when algorithms interpret what might be a legitimate search for answers as the right percentage of doubt to warrant sending that person more information to increase the doubt?

The film estimates approximately 2 billion people are online or on social media every day and the addiction-inducing AI churns on. It makes its most stark and sobering warning with a clip from the granddaddy of all computers-take-over-the-world movies: “The Terminator.” We are shown the “flashback” sequence, where metallic skeletal robots blast away at humankind, putting an end to man’s dominance on the planet and overcoming human strength.