ROME — Bishops certainly have had bad weeks before. One thinks, for example, of the unfortunate late Cardinal Michele Giordano of Naples, who, when it was announced in 1999 that he was under investigation for a Ponzi scheme run by his brother with archdiocesan funds, gave an interview in which he insisted he couldn’t be complicit because he wasn’t smart enough to understand what was going on.

In the annals of such bad weeks, however, a special place now must be reserved for Archbishop Éric de Moulins-Beaufort of Reims, France, who, in one seven-day span, has managed to infuriate both victims of clerical sexual abuse and faithful Catholics most inclined to defend the Church when it’s under attack.

After having apologized for his “clumsy” wording a week ago in which he appeared to assert that the seal of the confessional was above the laws of the French Republic, Archbishop de Moulins-Beaufort, president of the French bishops’ conference, now has sparked outrage in Catholic circles after headlines around the world Wednesday reported he said child protection actually overrides the secrecy of the confessional.

“The scope of the violence and sexual assaults against minors revealed by the report demands that the Church revise its practices in light of this reality,” he said. “It is therefore necessary to reconcile the nature of confession with the need to protect children.”

In all honesty, the archbishop probably didn’t intend to give rise to either impression, but his struggles to make himself clear reflect the hyper-sensitivity of the situation in which the French Church now finds itself.

Like his American, Irish, Canadian, German, Belgian, and English confreres, and like bishops anywhere when the clerical abuse crisis detonates in their own backyard, Archbishop de Moulins-Beaufort has to get two things across to the French public, which are often difficult to reconcile in the court of popular opinion.

First, that the Catholic Church is fully and inexorably committed to collaboration and transparency with regard to civil and criminal justice systems, and that the Church will satisfy or exceed all civil laws with regard to reporting abuse.

Second, that the Catholic Church is also committed to the integrity of its faith and sacramental life, which includes defending the inviolability of the confessional seal. 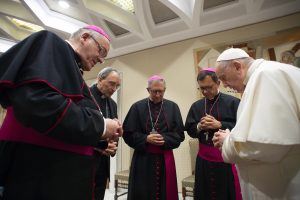 Pope Francis and four French bishops gather for silent prayer for victims of abuses committed by members of the clergy, prior to the pope's general audience at the Vatican, Oct. 6. The bishops were visiting Rome following a report on sexual abuse in France that estimates more than 200,000 children were abused by priests since 1950, and more than 100,000 others were abused by lay employees of church institutions. (CNS photo/Vatican Media)

Perhaps the problem here is that it’s Archbishop de Moulins-Beaufort answering the questions, which means that virtually anything he says will be styled as defensive and rooted in institutional self-interest rather than genuine concern for the welfare of abuse survivors.

It’s not really his fault, of course. When a scandal erupts, reporters don’t want to be passed off to underlings, they want to hear from the CEO. Still, what would be truly helpful when the next controversy around the seal of the confessional erupts is to hear, not from bishops, but from survivors of abuse themselves, because what they’d have to say would be illuminating.

Over the years I’ve interviewed multiple survivors on this issue, and not just those who join movements, attend rallies, and call press conferences, but also those who are quietly trying to put their lives back together and achieve a sort of spiritual and personal peace.

Almost to a person, they’ve told me that repealing the seal of the confessional not only wouldn’t promote child protection, it might actually impede it.

In general, abuser priests don’t reveal their abuse in the confessional. They’re master compartmentalizers and rationalizers, and either don’t regard their conduct as sinful or simply push it to the side psychologically and don’t address it. In either event, they’re not going to bring it up with a fellow priest, regardless of the context.

The only situation in which a priest is likely to hear about clerical abuse in the confessional, therefore, is if a victim brings it up, usually because they’re carrying some burden of guilt, thinking they either brought it on themselves or didn’t do enough to resist it. At this stage in the journey, the victim often is unwilling to disclose the experience publicly, and the only reason they’re willing to do so in confession is because they know the priest is under an absolute obligation never to tell anyone what they discussed.

Sometimes, with patience and good pastoral counseling, the victim eventually decides to come forward and make a formal accusation against the abuser. In other cases, based on the realities of their own circumstances and what it means for them to heal, they opt not to do so. In any event, the confessional is one environment in which it’s the wishes of the victim, and no one else, that reign supreme.

Take that away, and, in all likelihood, the only thing you’ll accomplish is to make it less likely that a certain share of victims ever come forward.

While it may be tough for the de Moulins-Beauforts of the world to say so out loud while the fires are raging, that doesn’t make it any less true. Perhaps what the French Church ought to be doing right now is spending less time crafting the next episcopal statement, and more time finding survivors who, at least on this point, can tell the story for them.