It all began in the 13th century when Dominican friars converted the adjacent church of Santa Maria Novella (then known as Santa Maria delle Vigne) into a monastery. They set up an apothecary in the convent’s infirmary.

By the 16th century, Catherine de Medici had become the operation’s main patron. Acqua della Regina, a scent developed in her honor, was given to Catherine before her departure for France in 1533. A variation, Acqua di S.M. Novella, remains today as the company’s signature fragrance.

In 1612, the friars began selling herb-based tinctures, balms, and tonics to the public.

In 1866, the property was confiscated by the kingdom of Italy and, according to Wikipedia, “passed into the ownership of Cesare Augusto Stefani, the nephew of the monastery’s last director, Damiano Beni.” One senses another compelling backstory there.

It stands around the corner from the original church and a five-minute walk from the Santa Maria Novello train station.

The main sales room, with its gilt chandeliers, heavy drapes, and soaring ceiling adorned with frescoes by Paolino Sarti, occupies a former chapel. You can order, if you like, from touch screens. 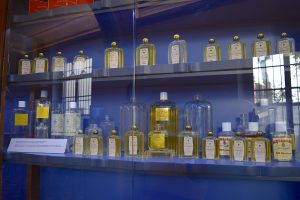 The library — with frescoes here by early-Renaissance artist Mariotto di Nardo — occupies the church’s former sacristy and houses a meticulous record of the apothecary’s history, including a collection of medieval recipe and reference books. In the Antica Spezieria (old pharmacy), the museum abutting the shop, you can view antique apothecary jars, soap-making machines, and scales as well as the full range of herbals, medicines, liqueurs, and food products.

The retail empire has expanded throughout Italy and to 75 other countries. In fact, there’s a Santa Maria Novella store on Melrose Place right here in West Hollywood.

But most of us will have to be content to scroll through the online catalog (what with international customs laws, bereft, alas, of the mouth-watering liqueurs available in the actual store).

There are deep burgundy bags of potpourri, fragrance diffusers, and cleansing sprays — a different scent and mood for each season of the year. You can buy Iris Toothpaste ($20 a tube), Crema de Barba (shaving cream) at $71 a pop, and Sapone allo Zolfo — sulphur soap — with which to scrub off after, say, an exorcism.

The products are beautifully bottled, beribboned, embossed, sealed, and boxed in thick creamy cardboard and ivory stamped with an elegant, ecclesial gold script. These are products that would have looked at home on the dressing table of a Florentine princess or a young nun who’d been whisked away to the convent to avoid romantic intrigue but was still receiving a generous allowance from home.

Even today, whiffs of the Black Plague, malaria, and other dread diseases linger.

Aceto Aromatico is a small squat amber-colored bottle of “sniffing salts.” “This aromatic vinegar, traditionally known as the Vinegar of Seven Thieves, appeared in Toulouse during the terrible plague that smote the city between 1628 and 1631” and, according to legend, enabled the thieves to steal from the ill without being infected. I wonder if it availed anyone against COVID-19.

Most of the ingredients are still grown in the pharmacy garden. The bags, labels, and boxes are manufactured on-site as well, which was finally moved from the original facility in 2000 to a nearby spot in the northern part of Florence.

The Dominican friars aren’t the only Catholic order ever, or now, to manufacture pricy luxury items or intoxicants.

To name just a few, at the Carthusian Grand Chartreuse Monastery, high in France’s Chartreuse Mountains, monks distill a classy liqueur, distinctive green in color and $50 or so a bottle, also from a secret recipe handed down by 16th-century monks.

At Andechs Abbey in Bavaria, Benedictine monks have brewed their eponymous beer since 1455.

The Cistercian nuns of the Abbaye d’Echourgnac, Dordogne, produce a cheese laced with a walnut liqueur which is sold throughout France.

The products seem like a splurge. But even Christ, knowing he was soon to die, suffered his feet to be anointed with costly nard.

The unseen monks and nuns, toiling behind the scenes, deny themselves so that we, too — maybe once in a blue moon — can allow ourselves a little taste of heaven.