Growing up in the Catholic bubble that encased me, I saw the world inhabited by only two types of people: those who were Catholic, and those who ought to be Catholic. The world was never that simple, and I had to eventually take a deep breath and step outside that bubble and discover the world was the sum of its contradictions.

Out in the world I had to discern a lot of things, especially when it came to writing. It is difficult to talk about those who influenced my writing because it may come off like I’m trying to equate my work with others to whom I have no business comparing myself. I have plenty of Catholic writers and thinkers who have inspired me, but two writers outside the Catholic camp also had a profound influence on me and, no doubt, many others. One of them was a questioning deist, the other a not-questioning-for-a-minute atheist.

Christopher Hitchens, the atheist, died several years ago. P.J. O’Rourke, the man with questions to a God he could not fully formulate in his heart and mind, passed away last week after a long battle with lung cancer.

Hitchens was a modern version of Orwell. Like the former writer (and another influence of mine), Hitchens dove into the deep end of the People’s Public Swimming Pool of Marxism. When he finally came up for air, he discarded much of what the University of Moscow preached and decided to become a world class contrarian. He lost his faith in Marxism but held on to his disbelief in a supreme being to the end. 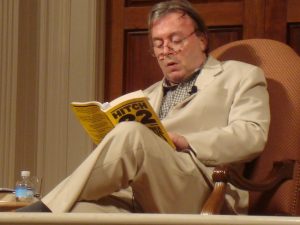 O’Rourke was too happy to be an atheist. And although he had, by his own account, a “Provisional IRA” surname like O’Rourke, he fell into the category from my childhood bubble of not being one of “us.”

He would self-identify as “Catholic-adjacent” through the mechanics of his wife and children being baptized into the Church. If Hitchens was the kid in class who had actually read Sophocles’ “Antigone” and could spell all the names of the main characters, P.J. O’Rourke was the guy in the back of class throwing spitballs, even though he had read the play too and could also spell their names, or at least turn each name into a double entendre.

O’Rourke was not your typical “conservative” essayist. He was too intent and committed to drawing outside the lines for that. Yet, he had many lower case “c” tendencies, especially when it came to political governance, which I believe is safe to say he was a dyed-in-the-wool political liberal — just one from the 18th century. That, by the way, is meant as a compliment.

Liberty, inalienable rights, and human autonomy were hallmarks of everything he wrote, whether it was a screed in Rolling Stone, a feature in the Atlantic, or one of his many books. Some of them have titles that are for adults only, but “Holidays in Hell” and “Give War a Chance” are two of my favorites.

The contradictions of his views are also Catholic, since what is our faith but the ultimate contradiction — losing one’s life in order to gain it. O’Rourke was as big an advocate of private property and personal freedom as Pope Leo XIII. He was also as committed to the decent treatment of immigrants and a sense of communal engagement as Pope Francis.

When O’Rourke was first diagnosed with cancer, he of course put something down in writing. It is beautiful, clever, and is dancing pretty close to the light of truth: “I believe in God. God created the world. Obviously, pain had to be included in God’s plan. Otherwise, we’d never learn that our actions have consequences. Our cave-person ancestors, finding fire warm, would conclude that curling up to sleep in the middle of the flames would be even warmer. Cave bears would dine on roast ancestor, and we’d never get any bad news and pain because we wouldn’t be here. But God, Sir, in Your manner of teaching us about life’s consequential nature, isn’t death a bit … um … extreme, pedagogically speaking? I know the lesson we’re studying is difficult. But dying is more homework than I was counting on. Also, it kind of messes up my vacation planning. Can we talk after class? Maybe if I did something for extra credit?”

May God, in his infinite wisdom and mercy, change the grade on O’Rourke’s final exam.