Remembering a ‘steadfast soul’ in the pro-life movement

The prolife movement has lots of heroes and heroines, sung and unsung alike, but there’s always room for one more. As an addition to the roster of unsung heroes I therefore nominate Dick Delaney.

Never heard of him? That’s no surprise. Besides his family and friends — and his patients, of course — not many people ever did hear of the late Richard P. Delaney, M.D. Let me tell you a little about him.

Dick Delaney loved life from conception to natural death and served it with great professional skill and devotion during a long career as a family physician. His dedication comes through in a newly published little book, “For Love of Life and the Family” (Serif Press, $5), written in the form of letters from him to his first great-grandchild.

To illustrate a point, the writer quotes a remark attributed to Soviet dictator Joseph Stalin: “If you kill one person, it is murder, but if you kill a million it is only another statistic.” Legalization has made abortion a statistic, Delaney says, and that’s a disaster for society. For where legalized killing takes hold, “no other right has or can have meaning.”

Delaney’s commitment to a career as a defender of life began while he was with the army in South Korea. Seeing villagers harassing a woman who was a leper, he chided the tormentors and gave the woman all he had — a pack of cigarettes she could sell to get desperately needed cash. It was just then that he decided he wanted to spend his life helping people. 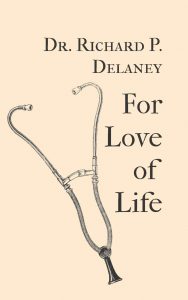 A Pennsylvanian by birth, he received his M.D. from the St. Louis University School of Medicine, then launched a family medicine practice in the Maryland suburbs of Washington, D.C., which was to extend over the next six decades. He and his wife, Joyce, had eight children, 34 grandchildren, and, at the time of his death at age 90 three years ago, 20 great-grandchildren.

In January1973 the Supreme Court, in its Roe v. Wade decision, imposed legalized abortion on the nation. Mother’s Day of 1974 saw publication in the Washington Post of a full-page “Open Letter to the Supreme Court.” Written by Delaney and signed by 382 physicians, it read in part: “If the Supreme Court justices decide to still the problems of some by stilling the lives of others, that then is their decision. It is not ours. And neither by advice nor consent will we have part in it.”

The author of those words lived by that creed. And his love of life reached also to the other end of life’s spectrum. That included establishing the hospice program at a Washington-area hospital and spending his days off most weeks making home visits to people nearing the end.

During office visits, Delaney typically greeted patients with a breezy “How ya doing, kid?” But after an examination and prescription, many visits moved on to a chat about matters of religious faith by a doctor who was himself a daily Massgoer.

“For Love of Life and the Family” contains a careful account by a professional of fetal development emphasizing the continuity of human life throughout. This is helpful and informative. But many readers will be even more impressed by the picture of the author that emerges.

“There have always been courageous, steadfast souls keeping the spirit of truth alive in a world seemingly bent on its own destruction,” he writes at one point. What he doesn’t say — but which nevertheless comes through clearly — is that Dick Delaney was one of them.

Saint of the day: Anthony of Egypt

How do you foster Catholic community in quarantine?