Reflections from Rome after a consistory to remember

It was a privilege to represent the Archdiocese of Los Angeles in Rome for the consistory of cardinals and for the two days of meetings with Pope Francis.

The consistory last Saturday brought 20 new cardinals into the College of Cardinals: 16 electors under age 80, and four nonelectors over 80. We were blessed to have Bishop Robert McElroy of San Diego included in the new group.

In his homily, Pope Francis spoke with Jesus’ words, “I came to bring fire to the earth, and how I wish it were already kindled!” (Luke 12:49). He emphasized that Jesus was speaking about the Holy Spirit bringing a new energy of discipleship and evangelization to the world.

He then mentioned the small charcoal fire made by Jesus after his resurrection when he prepared breakfast for the apostles on the shore of the lake, representing the gentle inner fire of Jesus who brings us meekness, fidelity, closeness, and tenderness.

When Pope Francis bestowed the cardinal’s biretta and ring upon each one, he always had personal words that he spoke to each one. He knew each one, his story, and his work in the Church in his own area and offered words of solidarity and encouragement.

On Monday and Tuesday, we met together with Pope Francis in the Paul VI Synod Hall to understand more fully the new apostolic constitution on the reform of the Curia of the Vatican. The new emphasis for the people serving in the Vatican is on discipleship with Jesus and being in service to the pope and the Church across the world.

Our small groups produced suggestions on how to achieve a closer working relationship among lay and clergy, and between the various offices of the Vatican. It was useful to use the example of our own Archdiocese of Los Angeles and its structures, which help foster close working relationships with all employees in service to the parishes and schools. 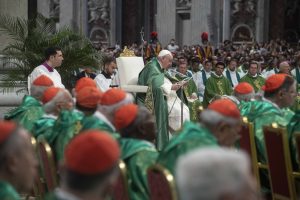 Pope Francis gives the homily at a Mass with new cardinals in St. Peter's Basilica at the Vatican Aug. 30, 2022. (CNS photo/Vatican Media)

A final Mass was celebrated on Tuesday afternoon with Pope Francis. In his homily, he emphasized the letter to the Ephesians, and Matthew’s Gospel wherein there was “set before us two instances of wonder: the wonder of Paul before God’s saving plan and the wonder of the disciples, including Matthew himself, at meeting the risen Jesus who then commissioned them.”

The pope challenged all of us: “How is your wonder? Do you sense wonder at times? Or have you forgotten what it means?

“Today, truly, the word of God awakens in us wonder at being in the Church or being Church! Let us return to our initial baptismal wonder. That is what makes the community of believers attractive, first to themselves and then to others: the double mystery of our being blessed in Christ and of going forth with Christ into the world!”

Our days concluded with a deep sense of faith in Jesus Christ and our fellowship with Sts. Peter and Paul, as well as with one another! We all departed with a new sense of urgency to bring Jesus and the Gospel to everyone back home.