Is the unthinkable becoming thinkable again?

It has been 76 years since atomic bombs exploded over Hiroshima and Nagasaki. The number of people alive who experienced those two terrible events is shrinking daily.

Even we baby boomers who grew up with take-cover drills in our classrooms and backyard bomb shelters are a minority now. Our historical memory grows fainter.

I remember huddling under my desk at Visitation Elementary School in Westchester, and imagining what might happen when the windows in our classroom shattered from the initial shock wave. The testing of air raid sirens occurred regularly.

During the Cuban missile crisis, our neighbors were stockpiling canned foods in their bedroom. The best my busy mom had time for was buying a few gallons of water to keep in the garage. Even as a kid, I was unconvinced they would be of much help, but growing up a few miles from LAX suggested our survival odds weren’t too great anyway should the ICBMs take flight.

As a kid, I read a lot about nuclear war. My favorite Armageddon novel was “Alas, Babylon,” by Pat Frank. It was a kind of Swiss Family Robinson meets the apocalypse.

“Alas, Babylon” was a look at how isolated U.S. communities might survive an all-out nuclear war, living by their wits as the social order broke down. “The law of the jungle reigned, but in the wreckage a few courageous survivors, men and women with the guts to have hope, were determined to build a new and better world on the ruins of the old,” the jacket copy read. 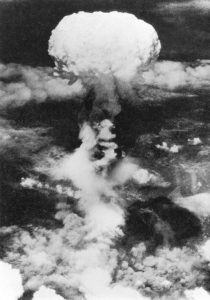 Being a kid at the dawn of the nuclear age meant anxiety permeated us like Strontium-90. We couldn’t escape it. Another best-selling novel and movie was “Fail-Safe.” It described a scenario where all the safeguards break down and both the Soviet Union and the United States are trapped by their distrust and their commitment to Mutual Assured Destruction, the underpinning of our nuclear strategy and one of the most appropriate military acronyms ever. “Dr. Strangelove” was a bitter comic take on the same theme.

But the Soviet Union collapsed. Sam Nunn and Dick Lugar were statesmen-politicians who led efforts to reduce the insane number of nuclear weapons in both arsenals to just moderately crazy levels. Kids raised since the 1990s had other catastrophes to fantasize about such as climate change and international terrorism. The threat of a radioactive holocaust receded.

But the world never got any safer. Arms control treaties have been allowed to expire. New nuclear powers like North Korea bring fresh crazy to the table. And now the heir of the Soviet Union’s nuclear arsenal is publicly threatening its use should anyone try to stop his slaughter of his “brother Slavs” in Ukraine.

A few weeks ago, my son’s in-laws sent his family Potassium Iodide tablets, meant to protect the thyroid from radiation exposure. A friend of mine wants to pack a go-bag in case a quick exit away from incoming ICBMs is called for. The possibility of the unthinkable becoming thinkable once again has unleashed a stream of memories for those of us who still remember our past dread.

Is it possible that human beings can keep themselves from using the unthinkable? Syria unleashed chemical gas attacks against its opponents, and Russia used banned nerve agents to take out enemies that Vladimir Putin wanted killed. Such weapons are banned by international conventions, yet the world barely blinked. Would it be so hard to imagine that nuclear weapons won’t be used again?

Are we like children near a hot stove, needing to burn our fingers again and again in order to remember that it shouldn’t be done? Do we need to lose Kyiv or London or Los Angeles to a nuclear nightmare so that for another 75 years our fingers stop edging toward the button?

It’s a horrid thought, yet the masters of war may in fact be strategizing the End Times now. Some evangelists like Pat Robertson and Greg Laurie seem to relish the idea. “I believe we’re living in the last days,” Laurie said. “I believe Christ could come back at any moment.”

Pope Francis sounds distinctly less enthusiastic. In a recent speech he recalled Noah and the great flood rather than any triumphant descent of Jesus upon the radioactive remains of his creation: A nuclear war would “destroy everything” and the survivors would have “to start again from scratch,” he said.

The pope has called often for nuclear disarmament, saying that “true peace cannot be built on the threat of a possible total annihilation of humanity.”

“These weapons do not only foster a climate of fear, suspicion, and hostility. They also destroy hope,” he said in 2020.

Hope is huddled under its desk right now, waiting to see who thinks first.

Greg Erlandson is the president and editor-in-chief of Catholic News Service.