Pope’s top diplomat says gist of new encyclical is simple: ‘No time to go it alone’

ROME – Given that Pope Francis’s new encyclical letter Fratelli Tutti is among the longest papal encyclicals ever published, with 287 separate points and over 43,000 words, one temptation may be to think it’s just too complicated to be digested quickly and thus to file it away as a “rainy day” project for another time.

Functionally, of course, that means never getting around to it at all – as Creedence Clearwater Revival famously put it, “Someday never comes.”

Fratelli Tutti is undeniably complicated, addressing a diverse set of topics from the idea of a “just war” to global economics, but according to British Archbishop Paul Gallagher, at the heart of it all is a relatively simple message: “We’re all in this together.”

“At a time when there’s a danger with all the threats we have, beginning with the coronavirus, of a tendency, perhaps particularly in the developed world, of saying, ‘Let’s close down. Let’s resolve our problems from within, [because] only on our own do we have the ability to do that,’ the pope is saying, ‘No, we have to approach this as a human family. We have to renew our confidence in our profound humanity,’” Gallagher said Oct. 6.

Gallagher ought to know what the pope has in mind – he’s the Vatican’s Secretary for Relations with States, equivalent to the Secretary of State in the US, and thus he’s charged with translating Pope Francis’s broad vision into the nitty-gritty of geopolitics and diplomatic heavy lifting.

Gallagher spoke in an exclusive interview with Crux, a partner of Angelus.

Pope Francis traveled to the Umbrian town of Assisi in central Italy on Oct. 3 to sign the new encyclical on the eve of the feast of St. Francis, his namesake and Assisi’s most famous son. The title is a reference to one of St. Francis’s admonitions to his new community in the 13th century, insisting that they’re to regard one another as brothers.

Under the cloud of the coronavirus pandemic, the pope made the trip in a strictly private manner to avoid creating crowds and thus a risk of spreading the disease. He celebrated Mass in the small crypt of the Basilica of St. Francis that contains the saint’s remains, and then signed the new document in the presence of just a handful of Franciscan friars and Poor Clare sisters. 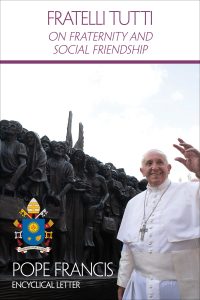 This is the cover of the English edition of Pope Francis' new encyclical, "Fratelli Tutti, on Fraternity and Social Friendship." (CNS photo/U.S. Conference of Catholic Bishops)

Fratelli Tutti is just the third encyclical letter by Pope Francis, after Lumen fidei in 2013, a text largely written under Pope emeritus Benedict XVI, and Laudato si’ in 2015, another document inspired by St. Francis and his love of creation. The new encyclical is dedicated to the theme of human fraternity, including its enhanced importance as a result of the common global threat posed by Covid 19 and its socio-economic fallout.

“In a time of crisis, the pope is trying to give a new vision, moving forward from many of the other things he’s been teaching in these years of his pontificate,” Gallagher said. “It’s trying to say, let’s reengage, recommit, to dialogue, to reaching out to people, to seeing the true humanity of everybody at this particular time.”

“We have a lot of people in the world today who are very fearful for the future, who fear for the future for their children and grandchildren, fearful that what we’re about is going to bring more and more conflict to the world, and I think the pope is saying it doesn’t necessarily have to be so,” the 66-year-old Gallagher said, who’s held his present position since 2014 after diplomatic assignments on behalf of the pope in in Australia, Guatemala, Burundi and the Council of Europe.

It’s important to note that like Laudato si, Fratelli Tutti doesn’t begin with any indication of to whom the document is addressed such as “venerable brothers in the episcopate,” a formula used in past papal encyclicals. That’s likely because Francis doesn’t want to limit the audience, and really he’s addressing it to the entire world.

Gallagher said that as part of that picture, the pope has a vision of religious believers and humanists without any particular religious convictions coming together.

“Pope Francis is a Jesuit, and on the top of the [Jesuit-run] Gregorian University [in Rome] it says Religioni ac bonis artibus, ‘religion and good arts.’ That’s a humanistic concept,” Gallagher said.

“It’s bringing these two things together for the good, and ultimately, we would believe, for the salvation of humanity,” he said.

Ultimately, Gallagher said, the message of Fratelli Tutti lies in the imminently simple idea that this is no time to go it alone.

“I think that’s what he’s trying to say: Let’s not lock ourselves away, let’s not go into our cocoons, but let us move forward on all sorts of issues, and face up to the issues, without fear,” he said.

A simple message for such a complicated document, perhaps, but no easier to achieve for its simplicity. In the end, though, what happens next isn’t up to Pope Francis so much as to the rest of us.

The notion of a vocation