Pope strikes boldly on both Latin Mass and corruption, but will it work?

Pope Francis’ 10-day stay in Rome’s Gemelli Hospital earlier this month was bracketed by the two other great convulsions of the summer. Just a day before he went in, Vatican prosecutors indicted 10 people for fraud and embezzlement, including a sitting cardinal, setting the stage for a “trial of the century.” Two days after he got out, Pope Francis basically suppressed the Latin Mass.

Granted, the earthquake triggered by the indictments may be more localized, with its aftershocks felt primarily in Rome and environs, while the eruption caused by the Latin Mass decision has been a bit more global.

Those with eyes to see nonetheless regard both as key litmus tests of the success or failure of the pope’s broader reform effort. He justified both measures as a service to unity, designed to rally the Church around a common liturgy, in the case of shutting down the Latin Mass, and a shared sense of mission rather than the pursuit of personal gain, with the anti-corruption campaign.

Right now, however, it seems reasonable to ask in both cases: Will it really work?

To begin with the July 3 indictments, they include not only Italian Cardinal Angelo Becciu, the pope’s former chief of staff and the first cardinal to be indicted by a Vatican criminal court or to be tried by lay judges, but other heavy hitters, such as René Brülhart, former head of the Vatican financial watchdog unit and a Swiss lawyer world-renowned for his anti-money laundering expertise.

From the beginning, the defendants in the case have asserted their innocence vigorously, with Cardinal Becciu and his allies in particular suggesting he’s being made a scapegoat for the failures of others, up to and including the secretary of state, the second most powerful man in the Catholic Church after Pope Francis himself, Italian Cardinal Pietro Parolin.

In the trial’s first hearing on Tuesday, the challenges became clear when it emerged that prosecutors had not met their discovery obligations, failing to turn over all the materials contained in some 29,000 pages supposedly attached to the original 500-page indictment. Judges set a deadline of Aug. 10 for everything to be available to the defense.

The fact that such a simple procedural step couldn’t be met immediately suggests a judicial system in the Vatican that may be overwhelmed, in part due to the logistical headaches of a trial involving 13 defendants — the 10 individuals, plus three corporate entities — and a grand total of more than 30 lawyers. 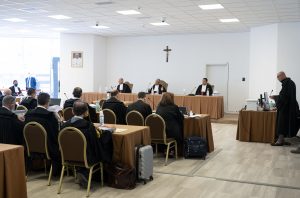 The judges of the Vatican City State criminal court face dozens of lawyers in a makeshift Vatican courtroom July 27, as the trial of 10 defendants in a financial malfeasance case begins. Cardinal Angelo Becciu is among the defendants. (CNS photo/Vatican Media)

Pope Francis needs this trial to be seen as fair, transparent, and competent, because if anything appears to call into question the legitimacy of its eventual verdicts, then the take-away is likely to be that financial reform on his watch is mostly smoke and mirrors.

Similarly on the Latin Mass, Pope Francis explained in a letter to the bishops of the world accompanying his decree that while the gradual liberalization of the pre-Vatican II Mass under St. Pope John Paul II and Pope Emeritus Benedict XVI was intended as a service to unity, in reality it’s had the opposite effect, becoming a new point of division.

That point was amplified in a recent interview with Catholic News Service by American Archbishop Augustine Di Noia, an adjunct secretary for the Congregation for the Doctrine of the Faith and formerly Pope Benedict’s point man for relations with traditionalist Catholics attached to the old Mass.

“The thing has gotten totally out of control and become a movement, especially in the U.S., France and England,” Archbishop Di Noia said. “[It’s] a movement that aggressively promotes the Traditional Latin Mass among young people and others as if this ‘extraordinary form’ were the true liturgy for the true Church.”

Yet acts of authority are often not the best instruments to promote unity, especially when the community most affected is perceived as having political beefs with the one wielding authority for lots of other reasons. That’s certainly true of the Latin Mass cohort, with many strong conservatives harboring reservations about much of what they see as the Pope Francis agenda for a wide variety of reasons beyond the liturgy.

In such a case, it’s hard not to see what’s going on as the authority figure going after people he doesn’t like — and whatever else that may be, it’s not exactly a prescription for greater unity. Early reaction in Catholic circles would suggest greater division and a hardening of the lines, not greater cohesion.

Much will depend on what Pope Francis does from here. In his interview, Archbishop Di Noia said the aims of the push for the Latin Mass would be better achieved by “celebrating the Mass with absolute fidelity to the texts and rubrics” and also wider availability of “the ‘novus ordo’ (the modern Mass) in Latin.”

Will those things happen? Will Pope Francis make a priority of it, perhaps appointing someone with street credibility in the Latin Mass world to oversee the effort? At a minimum, such a move might take the edge off perceptions that this is a political exercise and, indirectly, promote the unity the pope wants.

In other words, these two measures, the indictments and the Latin Mass decree, aren’t the last word in themselves. It will be how Pope Francis and his team manage things from here which determines the difference between success and failure, both in the here and now and, eventually, in the eyes of history.